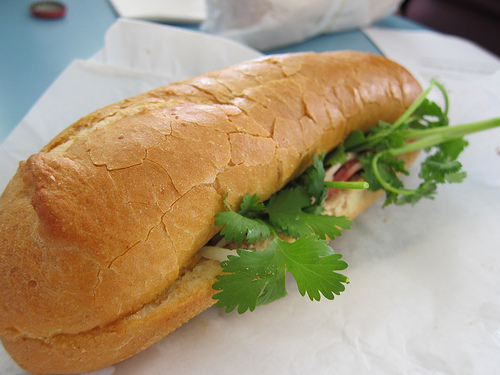 Last Saturday, I gathered a group for a Vietnamese sandwich crawl. The banh mi crawl traveled through Chinatown (and Little Tokyo!).

While I was waiting for the others to arrive, the presumed owner came out to ask if we needed any help. Once inside, he was very helpful in describing some of the various banh mis to our bemusement. The tiny shop held four or five tables and it seemed more like a take-out place. The menu is written in three languages; Vietnamese, Chinese and English.  After studying some pictures, we placed an order for the Buu Dien Special (#1) and the the pork sausage (#5).

There were four of us so a knife was necessary to divvy up the goods. The owner was kind enough to lend us a real knife.

First impressions: hey, these sandwiches (or at least the bread) are warm!

Buu Dien Special– loved the fresh cilantro, pickled veggies and quality cold cuts. Although there was mayo and pate, it wasn’t overwhelming.

Pork Sausage– There was a nice mouthfeel to the sausage (did I just type that?).

We enjoyed this stop very much and later I found out one of my crawlers went back for another!

Next up, we went to Lien Hoa. Once I saw it, I knew it was the “other” deli my family never went to. They didn’t allow photography inside but it’s essentially a Chinese BBQ deli selling produce out front and some take-out goods (including bakery items from local sources). The counter woman told us the sandwiches would take a bit of time as she was making the bread “crispy” or as I like to say, she was toasting the baguettes.

Lien Hoa offers three types of sandwiches. We ordered the #1 known as the Vietnamese Special and the #3 which was BBQ Pork. I should mention this is Chinese-style BBQ pork.

BBQ Pork: Although Chinese BBQ pork has never been my favorite, this was the worst example of it. It was completely dry. Only the salty veggies gave this sandwich any texture.

Cost: $7.41 for two sandwiches – too expensive and not worth it

We are not returning.

Moving on, we headed to LA Sandwiches, a shop tucked into a mini-mall. The menu was much larger and they even had a bacon banh mi. However, we decided to go with the #2 Special with pate and the #6 meatball.

First impressions: what is that burning bread smell?

Special with pate: It was immediately apparent the things we craved in a banh mi were there- the gelatinous ham, the generous smear of Vietnamese mayo, the crisp veggies. This is a sandwich I’d eat again.

Meatball: Could it be I liked this more than the banh mi with pate? Yes, that is correct.

Although LA Sandwich pulled through despite the burning bread smell, we liked the simplicity of Buu Dien’s banh mi more. I felt the pickled veggies at LA Sandwich were also too salty.

Next we were supposed to go to the Nam Thai Vietnamese Truck but could not locate it at its usual spot on Alpine. So we headed over to Spice Table in Little Tokyo. 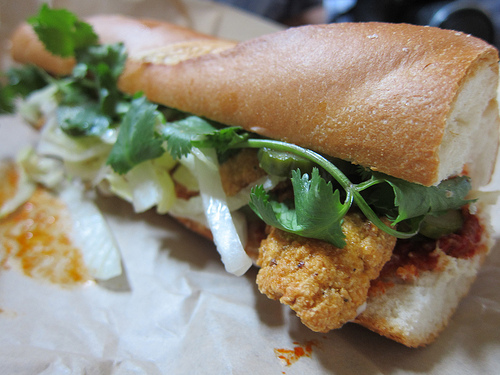 From there, we individually ordered and with my cole slaw and ginger beer, my cost was much higher. Average banh mi prices range from $7-9 which is quite a jump from the $2-3 we had been getting. Is the quality going to match the prices? 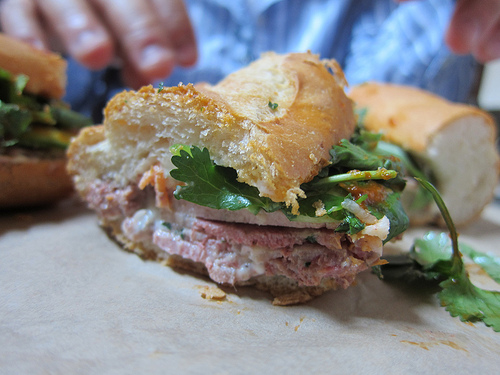 Cold Cuts: I’ve had this before and this time around, they put some spicy sauce on it. I didn’t care for the sauce on the cold cuts. It masked the lovely flavor of the pate and headcheese.

Meatball: I hadn’t tried this particular banh mi before. I admired the herbs and peanuts. It was a nice touch. I was doubtful about that spicy sauce.

Catfish: I also recall the catfish didn’t have the spicy sauce before but for this particular banh mi, I liked it. It went well with the ultra-crispy breading.

Overall, I like the neo-classic banh mi sandwiches. But I’d request no sauce next time and maybe I should become unaddicted to the shrimp chips and sides because it drives up the cost of a simple sandwich.

Thanks to everyone that came out! This was a really crawl and I’ll post my Progressive Indian Crawl through Culver City in the next couple of weeks.