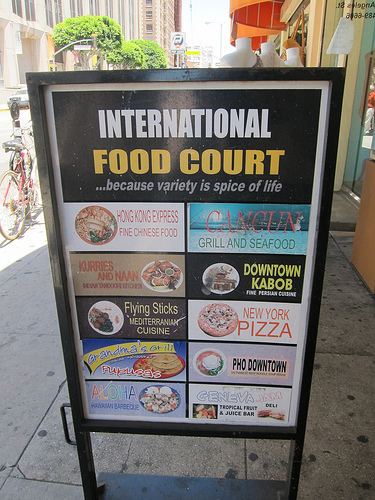 In my wanderings to try to find some decent lunch in DTLA, I came across a food court down in the fashion district. Now, I know what you’re thinking…a food court? But there could be a hidden gem. I was on the case.

Despite the signage, some shops have closed up. Now you have a choice of Vietnamese noodle soups, Indian, Mediterranean, sandwiches, Middle Eastern, Salvadorean or Chinese. I instantly vetoed the Vietnamese noodles. The prices were just too high (almost $9 for something I can get for $5-6 elsewhere). I recall eating at the Indian place many years ago but since everything was sitting around and there wasn’t much foot traffic, I decided to bypass it. My friend and I considered the pupusas at the Salvadorean place but we decided that’d be too heavy for lunch (okay, she decided that). And sandwiches and Chinese? Nah, no thanks.

So that left Mediterranean for her and Middle Eastern for me.

Downtown Kabob is one busy stand. They had two counter people who were constantly answering the phone. To say they do a brisk take-out business is putting it lightly. In between calls, they take orders from passerbyers and I counted at least 4 delivery guys packing orders to deliver. I waited about 12 or so minutes for my Soltani plate. At $12, this was as much as I’ve paid in a restaurant. But at the same time, it was better than the nearby restaurants. They offered four specialty rices on top of their normal rice. And they had half orders for light eaters. The meat is also Halal certified.

I got lima bean rice with my Soltani plate. This came with beef koobideh and barg (filet mignon). My friend who is Persian told me I was lucky to have gotten the crispy piece of rice.

I was really surprised how flavorful and tender the barg was. The koobideh was all right. I probably ate too  much of the rice. And after biting just the tip of the roasted pepper, my friend said I turned bright red and started sweating. Well, I it was a spicy pepper! I continued eating it though much to the detriment of my stomach lining.

The only thing that could have been improved upon are the horrible take-out plastic utensils they give you. Although the knife did cut through the barg, it left the knife impossibly curved and useless with each succeeding cut.

Although you’re eating in a food court, I’d recommend this place over California Kabob Kitchen.

One thought on “DTLA: Downtown Kabob”