WeHo: Taco Tuesdays at the Abbey

Recently, the Abbey‘s menu was updated by Chef David Emaleh (Cleo, XIV, Tres, Katsuya). On Tuesdays, tacos are only $1.50 (normally $3) and they also have $10 beer buckets and $32 pitchers of margaritas. The party is hosted by Maria “Rosas” (pictured above handing out jello shots), the beloved WeHo Rosas lady.

margarita and chips with guacamole

I was surprised to learn the meat for the tacos were premium. Chef David explained they used local and sustainable meats like jidori chicken and fuzzy pigs from San Diego. Tasty critters… 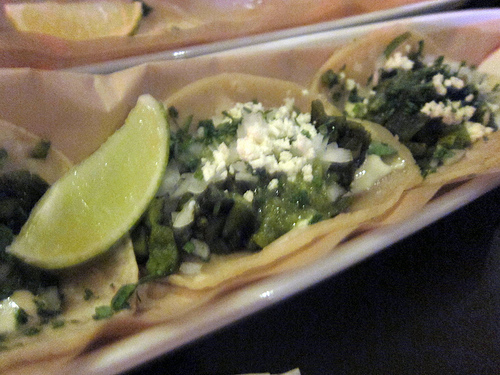 I really enjoyed the poblano and cheese tacos. For a vegetarian taco, it wasn’t missing any of the flavor. It’s slightly spicy and there are mushrooms in this taco which were quite meaty. I also liked the ahi taco– the ahi is cut in long strips, very unusual. 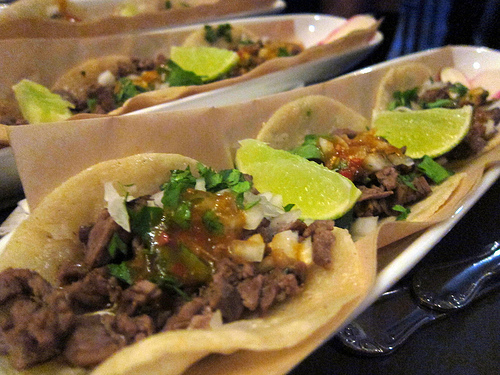 The group’s favorite was the pork tacos. We really liked the cheese which turned out to be feta. At $1.50 a pop, I could eat gobs more.

All the tacos are on corn tortillas and came with salsa, onion and cilantro.

For years, I thought of the Abbey as the “Grand Central Station” of gay bars. It’s a place I’d stop in at least once during a WeHo bar crawl night. I’d eat maybe a plate of nachos if I got really hungry or brunch was always fun. But I never thought seriously of the menu. With the menu updates, I actually am considering having dinner here. If the fresh tacos were any indication, I’d probably like the braised meat dishes like short rib stout braise or pork sliders. The warm chicken salad and portabello sandwich also look good. I love that they have their pickle recipe on the brunch menu.

2 thoughts on “WeHo: Taco Tuesdays at the Abbey”