I’m going to start with dessert first for my meal at SF’s Burma SuperStar. After our meal, we wanted something sweet. We weren’t really expecting something as decadent as chocolate and knowing full well Asian desserts tend to be on the less sweet side, we were still taken aback by this dessert. Our server told us to mix everything together– yes, even that scoop of ice cream. The result? Dessert soup with little cubes of bread. It wasn’t bad per se but I could see our server was upset that we may have not liked it. She did try to persuade us to get something a bit more “conventional.” I would say this is kind of a cross between an Asian dessert with gelatinous threads and an American approach to bread pudding- buried under a rich river of cream.

We started out with the almost pre-requisite of tea leaf salad. We also wanted the rainbow salad.  There were a heck of a lot of ingredients in both which required the salads to be throughly mixed before eating. 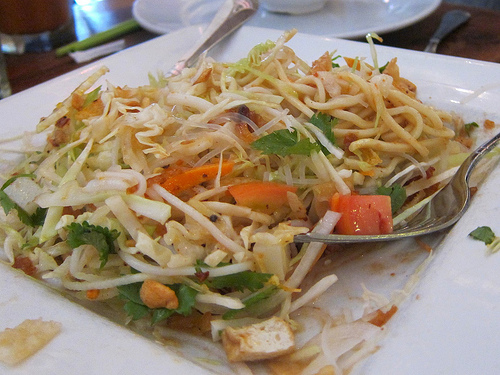 After tasting both salads, I preferred the tea leaf salad though it was quite a bit oilier. The rainbow salad with 22 different ingredients and 4 types of noodles left me somewhat confused. I love noodles but I prefer to eat one type at a time. 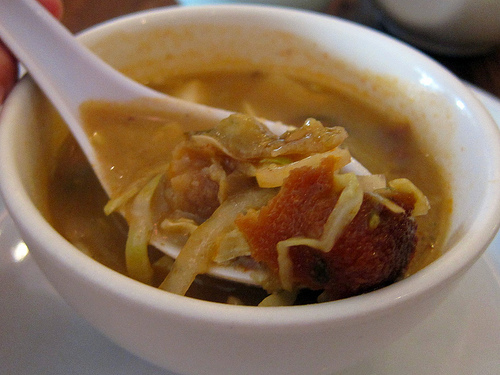 We were captivated by the vegetarian Samusa soup. I never thought to put samosas (or samusas as the Burmese say) into soup. The slightly piquant flavor made the vinegar/tart fiends in us smile. 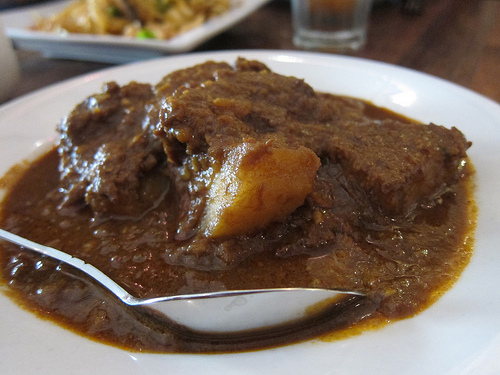 Next we had a simple Burmese beef curry. It was different from Indian curries I’ve had. I would say the spices weren’t as evident. This is not to say it wasn’t a comforting dish and we did enjoy it with plain white rice. 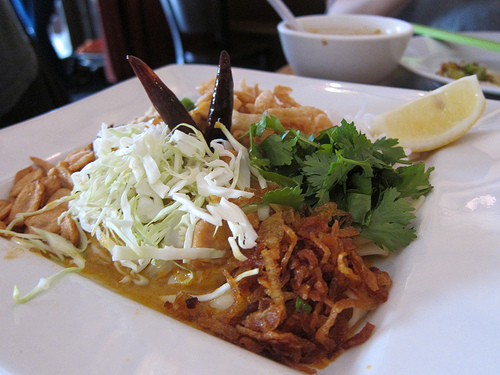 We were a bit lost on trying to decide what noodles to get. I thought they all sounded fairly similar- a little coconut chicken with a slightly different noodle and vegetable. Our server recommended the Nan Pia Dok which we found a bit over-cooked. The noodles were mushy and the curry was fairly mild despite the chiles in the dish. I would have liked to have tried the garlic noodles with duck instead. 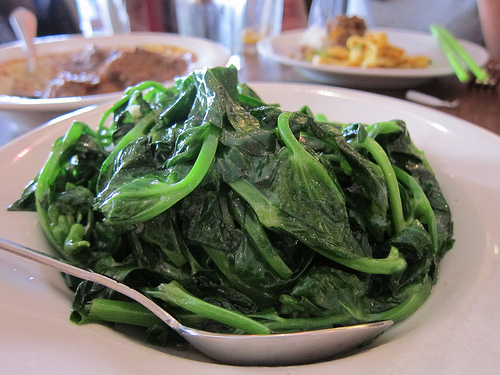 We were trying to keep to an all-Burmese menu but I couldn’t resist the wine and garlic stir-fried pea shoots. As it turned out, I greedily ate most of this dish myself.

As explained above, we found the dessert all right.

Overall we had a good time and there wasn’t any wait when we got there as they opened. I enjoyed my first Burmese food experience and would love to go back to try other things. I was more intrigued by the vegetarian options.