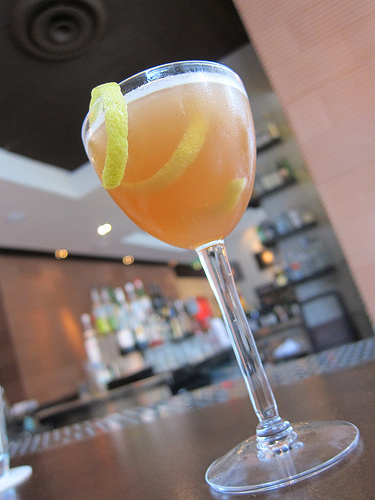 My last day in San Francisco was a full day. I had lunch at Burma SuperStar with my cousin and friends, mosied around Green Apple (to feed my addiction for books) and dropped in for drinks at Zero Zero.

Carina asked where I wanted to eat for dinner on my last night. I had so many wonderful meals- Incanto, Mission Chinese, Frances, Tadich Grill and Benu. It was early and I wasn’t that hungry. We were heading “somewhere” and all of sudden Carina said, “let’s go to Prospect.” I didn’t want to have a long meal considering the craziness of the previous night (ordering the entire menu at Benu) so we opted for the bar for some small bites. 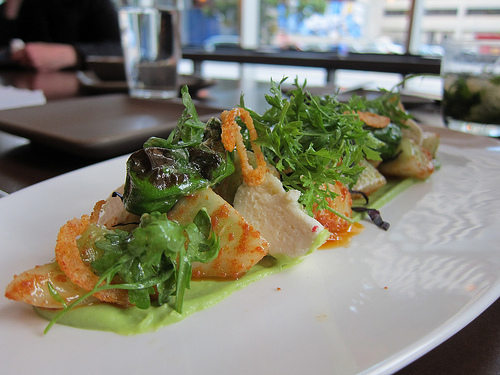 We started off with a couple of cocktails. Carina had the mai tai and I was going to go with Catcher in the Rye when I spotted the Vicious Cycle which had Zirbenz. I love Zirbenz! It is a stone pine liqueur from the Alps. I was first introduced to it in a whiskey cocktail from the Vesper Bar in Las Vegas.

I thought it was pretty funny that for this trip, Carina stuck with classic cocktails like mai tais and daquiris while I tended to seek something new, always craving a new experience. In this case, I rather liked her mai tai. My Vicious Cycle didn’t quite have that pine hit I was looking for but it wasn’t bad. It was probably a great, lighter cocktail to go with food.

I am not sure what happened. I wanted to have a light dinner but I wanted to order so many things from not just the bar menu but from the regular menu as well. The padron peppers sounded great as did the foie gras torchon, crispy pig trotters and soft shell crab with black quinoa. We decided to get a couple of appetizers, a salad and the burger and pastrami.

We had the summer salad from the dinner menu as it had padron peppers along with lemon cucumber, andante goat cheese, sun dried tomato and spiced onion. There was a spice I couldn’t identify but I have had it before. It evoked an Indian or perhaps Mediterranean flavor profile on an otherwise standard goat cheese and sun dried tomato salad. We ate this up.

I enjoyed the steamed clams with chorizo. Carina didn’t fare as well with the fishy smelling brandade. It was too bad as she loves brandade. 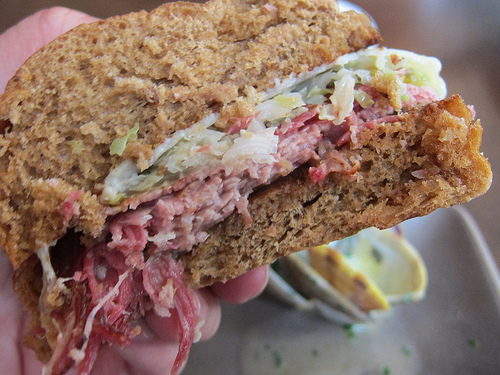 I felt bad again for Carina when her pastrami sandwich arrived looking like a slider. The bun was dry and she would have liked it on a regular hamburger bun if they were going to go with a bun instead of bread. It tasted like wheat. Shouldn’t it have been rye? She was 0 for 2 for pastrami this weekend. Maybe it’s time to stick to a Jewish deli for pastrami? 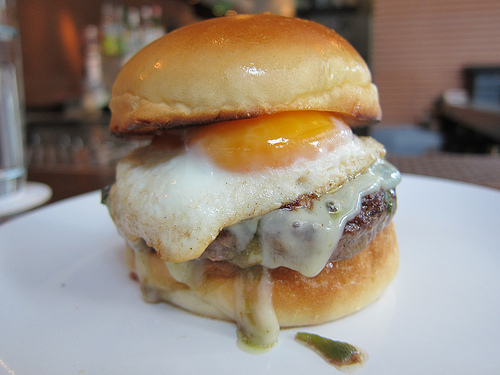 I was going to order the diner style burger from the bar menu but our bartender suggested the “secret” burger with New Mexican chiles and fried egg. Fried egg you say? Bring it! 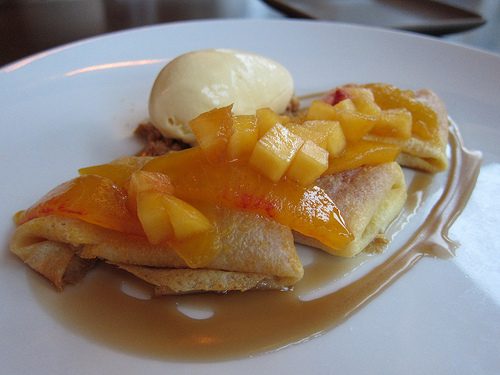 To make up for Carina’s less than happy meal, we got her the peach crepes with corn ice cream. She mentioned corn ice cream was a bit trend in SF last summer and though I haven’t seen it around here, it makes sense. I love corn chowder and can easily see this as an ice cream.

Catcher in the Rye

My dessert was another cocktail, the Catcher in the Rye. Since that is one of my favorite books, I couldn’t help but to already love the name of this drink.

We had a good time chatting with our bartender and guests at the bar. Carina still likes Prospect, she just didn’t like a couple of things. She’ll return and perhaps I will at some future trip to SF. I’d like to explore more of the dinner menu.

After dinner, I would continue my night at the Combier SF Chefs After Party and 15 Romolo.

One thought on “SF: Prospect”