When I was planning my San Francisco trip, I had only two dinner reservations and left things open for lunch. I did however know I wanted certain things like cioppino (Tadich Grill post) and to try Mission Chinese Food. The article I read in SF Weekly described it as a pop-up as sorts. Mission Chinese Food is located inside Lung Shan Chinese Restaurant. It originally started with its own 150 item menu and it seems Anthony Mynit, the owner of Commonwealth (which is next door) convinced the owners to let his chef Danny Bowien (Korean born, adopted by Americans, raised in Oklahoma) to tweak menu items. If you walk in these days, they automatically hand you the Mission Chinese Food menu– there isn’t a secret menu anymore.

The three of us ordered probably enough food for a small army. I just wanted to try everything! Things appeared haphazardly but I’ll present them as I would have liked to have eaten them- like starting with the Szechuan pickles. These were good and didn’t have much acid. I felt the sesame oil was of a higher quality. Then we had the savory egg custard with sea urchin. It reminded me of my favorite goma tofu with uni from Toranoko back home, except more liquid-y.

Carina wanted the kung pao pastrami. It arrived with a lot of potato.  I didn’t get the classic pastrami flavor but instead experienced a lot of tartness in this dish that I thought was a bit…weird. We left most of this dish untouched which was a shame. If I was home, I would have taken it  and eaten it later. I think perhaps the flavors needed to meld more.

I had read somewhere one of the must-try soups for SF was the tingly lamb noodle soup. I usually don’t like to share noodle soup dishes with others but Mission Chinese said this was the better noodle dish. There was definitely a lot of szechuan pepper in this dish- hence the tingly sensation. Between this and the mabo tofu, we were starting to sweat. A lot. Wayyyy attractive (why isn’t Commonwealth open for lunch, they need to run some cocktails over!). The lamb was very tender but I didn’t quite like the noodles. I’ve never been a big fan of thick white noodles (like udon), preferring thinner noodles which capture the flavor better. The broth was amazing though so eat the noodles with a slurp of broth. 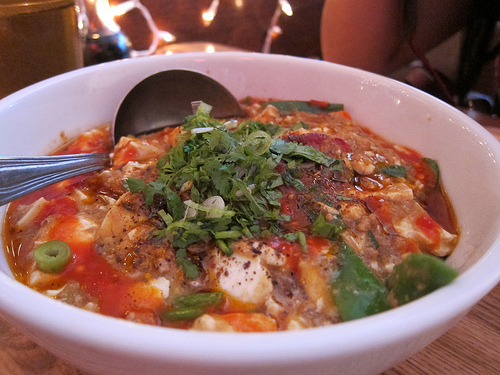 Szechuan pepper? Check. I love my tofu and this was a pretty good version. I could have used a bit more meat but that’s why we have tons of other dishes.

Tracy from Dishcrawl asked what pork jowl was which I promptly answered “delicious fat with a bit of meat.”  As it turned out we loved everything about this dish except for the actual mussels. We left quite a few behind because they weren’t open and I wasn’t about to risk food poisoning by opening them. Although maybe all the spice would have killed nasty little germies. I would like to see this dish with bigger mussels as well. The sauce was great with plain white rice.

We also had the salt cod fried rice. After all that spice, it was nice to have something “plain.” It was my second favorite dish of the day.

In general I would love to come back to Mission Chinese. I would say it was my favorite lunch of this SF trip. I thought of it as perfected Chinese food yet still with the charm of a more rustic place. The dragon that wends its way from the ceiling is a beguiling sight to see.