On our way to a seafood adventure

Last year, I was all about getting good dim sum in SF. This year, I wanted a big bowl of ciopinno– a very San Francisco dish. I have always maintained my last meal would be a big ass bowl of seafood. Nothing makes me happier than diving into a bowl full of shrimp, shellfish, crab, fish, scallops, squid, etc. I generally remove all shellfish from its shells and then enjoy my bowl. Carina is not really sure what this says about me but I’ll tell you why, a few minutes worth of work is better than interrupting my meal constantly for more seafood-y bits.

I had it in my head we’d go to Fisherman’s Wharf but when I asked around, everyone said I should go to Tadich Grill for ciopinno. It is the oldest restaurant in California, established in 1849 as a tent serving coffee and food to sailors. It was around before California was even a state. Founded by Croatian immigrants, it has changed hands a few times over. Tadich Grill is also known as the “original Cold Day restaurant” which involves an amusing story about a local politician saying it’d be a cold day if he wasn’t re-elected. Well, he wasn’t elected and a pile of ice was dumped at his door.

I opted for a Bloody Mary to start which came without garnishes except for the Tadich Grill swizzle stick. Carina had a Sidecar. While I love craft cocktail bars, there’s nothing like getting a drink from a place making the same type of drinks forever.

The current location of Tadich Grill features a long bar, open kitchen and a few booths. It reminded me of some classic restaurants in LA and I adored the fact the servers wore starched white jackets. There’s a certain flair leftover from a bygone era. The menu was immediately familiar- seafood, chops and even the avocado salad tickled me. We were seated at the counter and the woman to my left had started in on her clam chowder.  She relished every bite and then had to pack her salad to go to take back to her hotel room. The avocado looked so good that I ordered a salad. The woman told the gentleman next to her she had become addicted to chowder after visiting Boston. It looked good but I thought Carina’s Coney Island soup was pretty amazing. I was looking foward to my ciopinno. 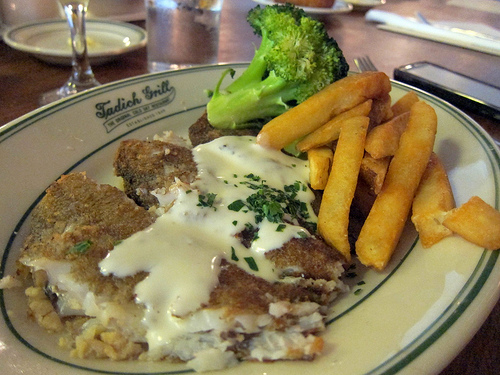 Another local favorite is the sand dabs. Carina didn’t think much of it but they were some damn good fries and broccoli.

The moment has arrived. I gamely put on my bib and started attacking my seafood. Shells were immediately discarded, garlic bread gathered onto my bread plate. I was ready.

It was hearty bowl. I worked my way to my favorite bits. Fish consumed. Scallops savored. I was surprised by how large one of my clams were. Yum! Mussels were all right. Oh hey, what’s this? Pre-shelled crab claws! Wonderful! And then my final bites of large shrimp. Yes, it was all very satisfying. And the broth as I suspected was particularly good with the garlic bread. I don’t generally eat garlic bread (in favor of filling my belly with more seafood) but the buttery bread did go ever so well with the soup.

Was it my favorite cioppino? No, but it was a very good bowl.

Check out their recipe in Saveur.

7 thoughts on “SF: In Search of Cioppino, Tadich Grill”