Seattle: How to Cook a Wolf

Last October, I went to Ethan Stowell’s Staple and Fancy and loved it. I wanted to try another one of his restaurants during my 24 hours in Seattle and chose How to Cook a Wolf. I was pretty excited about it. I thought it’d be maybe like Animal in LA. Yes, I based this entirely on the name alone. I did zero research which is unlike me. Once we got there after bouncing around from Pike Place and a couple of bars, we waited for our table at the small bar.

I ordered the Vincenzo (Bombay Gin, Aperol, Lillet Blanc, Dash each Grapefruit, Lavender & Orange Bitters). Ah, I liked this. A subtle Negroni-type drink. I also liked the whiskey cocktails they had including the Mario (Bulleit Rye Whiskey, Ramazzotti Amaro, Angostura Bitters) and the Sinatra (Bulleit Bourbon, Angostura Bitters, Sugar, Orange Peel). The Mario is closer to a Manhattan while the Sinatra is like an Old Fashioned. For tequila fans, they have the Locatelli (Aha Toro Tequila, Cointreau, Fresh Citrus Juices, salt) which is like a margarita.

After reviewing the menu, I figured it was easier to tell them what we didn’t want (a handful of things) versus all the items we wanted. We ordered the entire menu except for olives, turnip soup, beets, bruschetta and the baby greens. Later it turned out they were out of the rabbit liver mousse and one of the fish courses- the daurade. They did have plenty of branzino and asked if we wanted two branzinos but one would be prepared in the duarade preparation with arugula pesto, lemon, artichoke and olive. But I figured one branzino dish was enough. We kept the branzino that came with the calamari, cavalo nero (black Tuscan kale), bean stew. 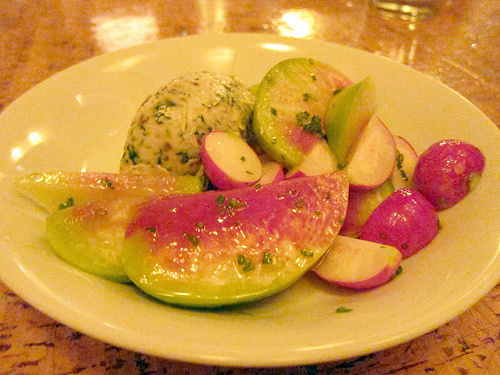 We started with a plate of proscuitto with rosemary honey and hedgehog mushrooms.

I was more excited about the mixed radishes but we found the dish under-seasoned and a bit too oily.

I have a love/hate relationship with tartare. On one hand, I love it. On the other hand, I rather eat raw fish. I like a good cooked steak and I generally find beef tastier after it’s been spiced. Raw fish on the other hand, can taste amazing with just a little salt.

For this reason, I loved the citrus cured escolar more. 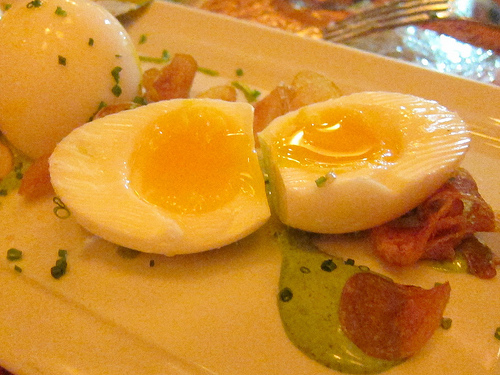 I expected the soft boiled eggs to be warm. They weren’t and I supposed you can think of these as a really DIY deviled egg. I ended up mixing some of the caper aioli and crispy potato together and mashing it all up to eat.

Probably one of my favorite things in the world are Brussels sprouts. These were great and even better with a fried egg.

Up next were the five pastas. I thought my favorite would be the spaghetti nero with the mussels but it turned out it was the vegetarian one, the tagliarini with brown butter, sage and shaved hazelnut. I also liked the strozzzapreti with the beef cheeks, oregano and mint. 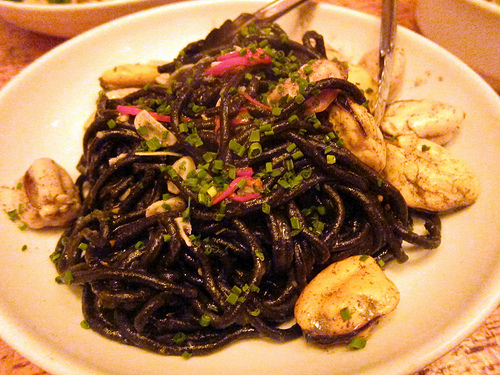 I also did like the potato gnocchi. Every now and then I come across really good gnocchi. The pillowy bites were quite perfect. We accidentally were sent two spaghettis and after all the other pastas, we were quite carb-ed out. But carbs mean our brains were happy, albeit sleepy. Time for some protein!

I did find it weird the short ribs and the pork belly came out before the fish, our final course. The braised short ribs came with caramelized root vegetables, garlic confit and braising jus. The beef was very tender but I needed just a tad more salt.  I am not generally a fan of sweet with my savory but the pear puree with the pork belly was interesting. The dish also came with grilled treviso and saba had been drizzled on the plate. I needed this moisture for the pork belly which was a bit dry. 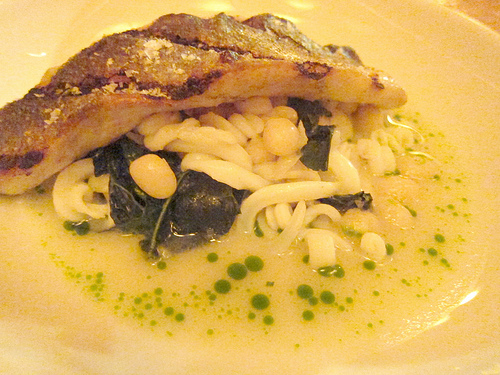 Branzino, a type of seabass, was our final course. Served with calamari, cavalo nero (kale) and beans, the dish represented the best rustic Italian to me. It finally occurred to me this restaurant was more like a small plates or cicchetti bar. While I didn’t mind the larger meat dishes and pasta, I felt the small plates were stronger. If I really wanted good pasta, perhaps I should have gone to Ethan Stowell’s Tavolata. There’s always next time although I’d probably end up at Anchovies & Olives first.

After dinner, we headed over to Knee High Stocking Company for more barhopping to continue our 24 hours in Seattle .

How to Cook a Wolf

2 thoughts on “Seattle: How to Cook a Wolf”