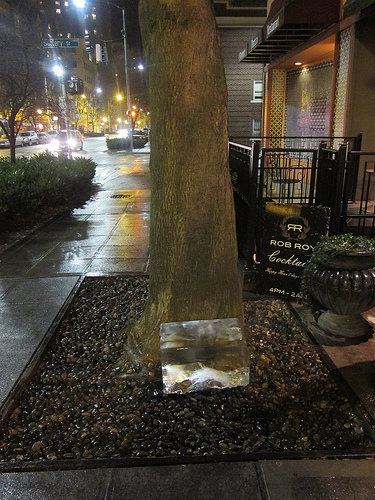 Last October before I headed to Portland Cocktail Week, I stopped in Seattle and went on a 2-day massive bar crawl. I hit up 2 tastings and 13 bars in 48 hours. Advance training for my liver.

I recently went back for a whirlwind 24-hour trip two weeks ago. How many bars did I go to then? Technically we went to 6 but I only drank at 5– well, then I had a drink at dinner so let’s just say 6.

We started our trip with a great lunch at Salumi then had a tour of the Pike Brewing Company. I had wanted to go to Etta’s for happy hour but a certain bartender magically delayed us until we missed their short happy hour. Fortunately, Zig Zag opens at 5 and we headed there.

I was welcomed back to Zig Zag and since there were four of us, we decided to get a table instead of hanging out at the bar. I ordered the Alaska (gin, yellow Chartreuse, orange bitters). It’s a simple but elegant classic cocktail. They have such an extensive list that it’s not difficult to find something you’d like. Or you can always go with wine and beer. But really? Cocktails are the way to go here. 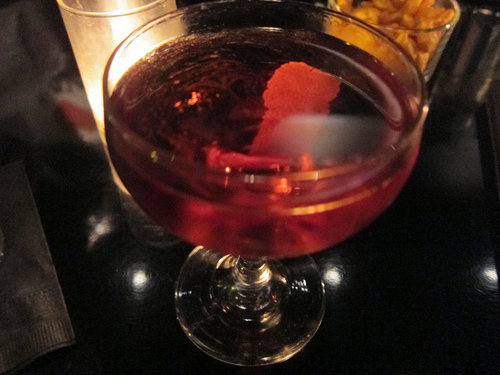 Next we rushed over to Rob Roy where I had told everyone and their mother to meet me. I had met Rob Roy’s owner, Anu Apte, in PDX during the now infamous Mary’s strip club after party for the opening Portland Cocktail Week event.

It was still happy hour so I opted for the Delores (aged rum, Dubonnet, sherry). Ooh, I liked it but then again, I’m a huge fan of sherry cocktails.

My friends loved their Sloe Gin Fizzes so much, they got more of the same. My mind boggled a bit. You can drink the same thing in one night? Especially, when it really would be just for tonight? I’m always seeking something new.

So for my next cocktail, I went with Anu’s suggestion, the Turinese Skyline (cognac, Cardamaro, Ramazzmotti, Regan’s orange bitters)  which just recently made it to the cocktail list.

It was a tasty follow up to the Delores.

I asked about the huge block of ice outside. Apparently it didn’t fit anywhere and they had to throw it out. What? No one to bar back and cut that ice down to smaller cubes? Aw…

We headed to dinner and then went to Knee High Stocking Company.

I had heard great things about Sun Liquor so I had put it on my list of places I wanted to go to. Going back to Zig Zag, Rob Roy and later Canon were a given. But I wanted to go to some new bars. After Knee High Stocking Company, we headed to Sun Liquor.  I liked the cute little space, the cool wavy coasters, the slight Asian feel to the art. But the drinks?

Oh, terrible. I ordered the John Cameron (Ardberg Scotch, Carpano Antica vermouth, orange bitters). It was unbalanced. The sweet vermouth was overpowering the Scotch. I tasted a friend’s cocktail and it was better but not much so. I felt the juice in his wasn’t fresh but apparently it’s more because they don’t clean the press in between pressings, muddying the flavors.

I wish we had stayed at Knee High.

Canon was packed when we got in but like the wind, everyone disappeared leaving enough spaces at the bar for us stare in wonderment. Canon really is a beautiful bar with a huge amount of liquor. It still amazes me how much Angostura they used to stain the bar. I told Murray Stenson at least they didn’t have to worry about earthquakes. He replied that the bottom shelf stuff like Kahlua would be saved though if anything should topple. Ha! See pics of the bar here.

I ordered a bartender’s choice from another bartender. He made me a tasty cocktail with rye though I specified bourbon. Ah well. It was my last tipple of the night.

My beautiful Seattle. One day, I’ll embrace you longer than 24 hours.

7 thoughts on “Barhopping in Seattle”