After drinks at Playa, I headed over to Mercato di Vetro for an impromptu birthday dinner. After my SF Labor Day weekend trip, I really didn’t want to do anything for my birthday. And I was going to let this birthday go by quietly. Well, it didn’t take much to convince me to try a new (to me) restaurant.

I was with several bartenders who like many bartenders I know ordered beer and wine. I had to go the cocktail route, especially since I spotted the Minta Fresca (Minty Fresh!). How could I not order a cocktail I thought was named after myself? Well, the Barcadi Oakheart, yuzu and mint cocktail was way too sweet for me. It did have leanings to be a good one though. Maybe add bitters. 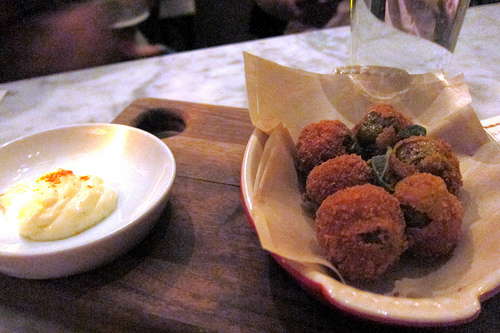 We had called ahead and told the restaurant to just send out food for 6 people. First to arrive where the mega hot fried stuffed olives. Oh, I was in love with these things. I’d go back just to get these meaty, Italian sausage-stuffed olives.

The beef carpaccio was covered with soft cheese and celery. I found this combination oddly pleasing though strange on the eye. I’m not used to a mound of snowy white cheese on my raw beef. How unkosher of me. 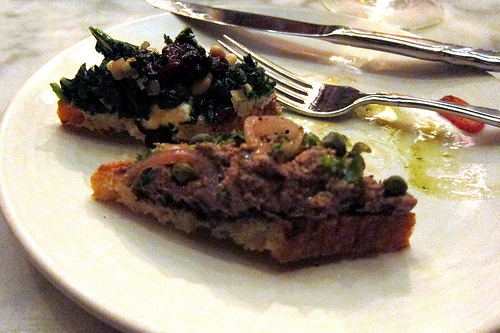 We tried several crostini including kale and chicken liver. I loved the kale of course, with the ricotta, pine nuts and currants. I actually wouldn’t mind a whole bowl full of salad like this. And the chicken liver was really good. 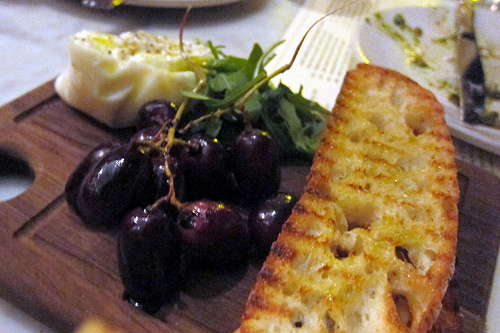 I actually thought these were grapes at first but turned out they were olives. Even eating them, I was convinced they were grapes. They were on the sweeter side. Maybe I had one too many Minta Frescas.

We had bone marrow! We did not bone luge.

And I’m not entirely sure why not. Wasn’t I with 5 bartenders?

We had a pasta not on the menu, the corn anglotti. Oh, that balsamic sauce was so good. Some in our party were tempted to link the plate. We went the classier route and slurped it up with a straw. Um, maybe that didn’t happen…or did it? 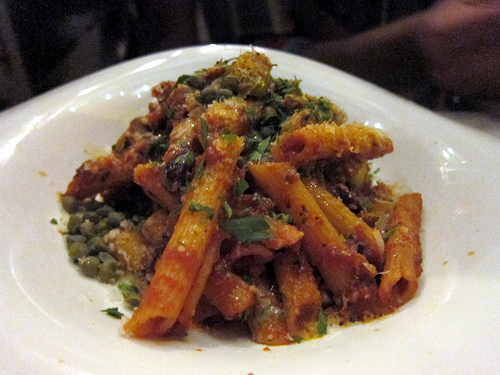 We did try a pasta on the menu called the sausage putanesca. The classic sauce was punched up by Italian sausage and served with penne. I really have never seen a table full of food disappear so quickly. 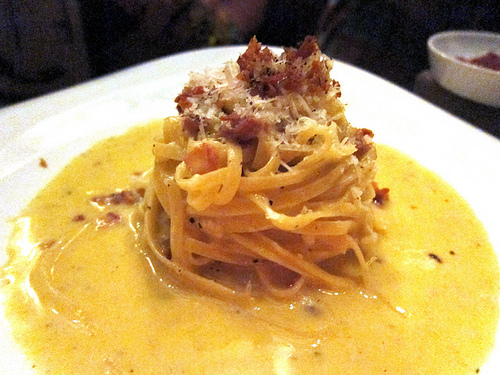 Everyone was equally enthusiastic over the cacio e pepe pasta with pecorino, truffle and cracked pepper. It was a bit difficult to share this so I would probably go with the ravioli or even better, the tortellini next time. 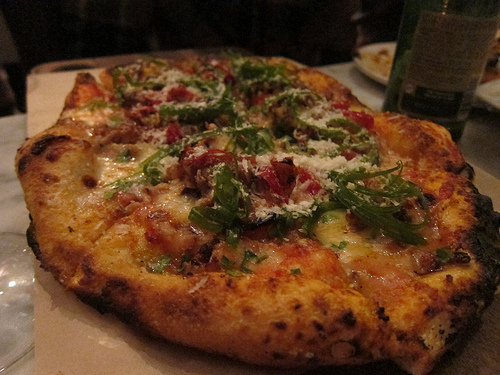 We also shared a couple of pizzas. How did they know I love kale so much (not shown). The boys in the group loved the proscuitto pizza. It wasn’t too salty. If I was pickier about pizza, I might possibly wished it was more crispy but I thought it folded well and that’s how I eat it- flatbush fold!

Before dessert, we had hanger steak. It’s a good thing we shared everything. I was so full! Still, I had myself a nice piece that was bloody just the way I liked it.

We also had a few veggie sides (pics way too blurry to post) including hen of the woods and baby squash. I favored the mushrooms but some liked the squash as it came with burrata. There were also meatballs. I liked the slightly crusty exterior to reveal a soft meaty center.

Since it was my birthday, the restaurant sent out a dessert sampler. Aw, thanks Mercato di Vetro!

I particularly enjoyed the tiramisu and the various ice creams.

Now I know where to go when I’m next in West Hollywood.

← Getting Vegan Ethiopian Food at Rahel
Eating at Animal During Foiehibition →