After getting back to Cambridge from Boston, I went over to RendezVous. I wasn’t particularly hungry as I had dim sum at Empire Garden and split a bunch of oysters and a lobster roll at Neptune. I didn’t really want to think about what to order and luckily for me, my friend did all the ordering including my drink. He got me the Siam Sling. I didn’t look at the cocktail list but I joked there must be at least 5 things in it. 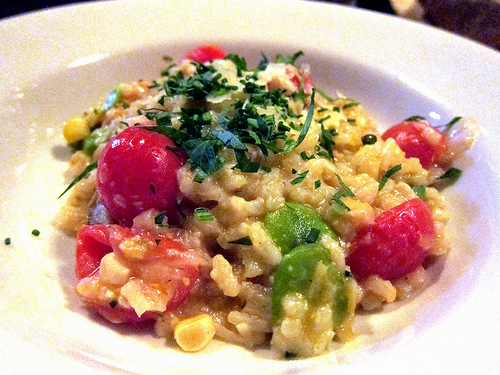 I did look at the food menu and thought the corn risotto looked good. He agreed it was one of RendezVous’s best dishes. It was early October so it was good to still get the last of summer’s bounty. The corn and tomatoes were sweet. And I liked the addition of the fava beans to bring us into the current season. RendezVous tries to grow most of its herbs and you can taste the difference with the few snippets scattered across the risotto.

You would never know from looking around the warm and inviting room this restaurant was in a former Burger King. Though the hints of orange and brown may be a nod to the building’s past. 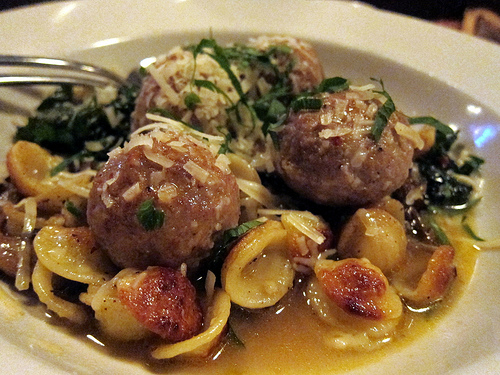 It seems like I was eating a lot of meatballs on this trip but I have a terrible weakness for ground meat – burgers, meatloaf, dumplings (the stuffing!), stuffed peppers, etc. How could I say no to this orechiette which featured delicious balls? I couldn’t. I appreciated the nod to healthy with the dose of greens and mushrooms in the dish.

And then there was wine…