I went to Citizen Public House a couple of times while in Boston last month. Citizen is a relatively new bar but to me it felt like it’s been a neighborhood staple for a while. Both times I went, it was crowded with regulars but I still managed to find a seat within 10 or 15 minutes in their large bar. On one end, the bar is dominated by the oyster bar. I’ll have to partake next time. The first night, it was all about the comfort food. Even crazier after not being able to eat two slices of pizza several hours before, I managed to order quite a couple of small plates at Citizen.

I can’t resist balls. Meatballs. Yeah, they were good. Moist, big and saucy. Oh my! 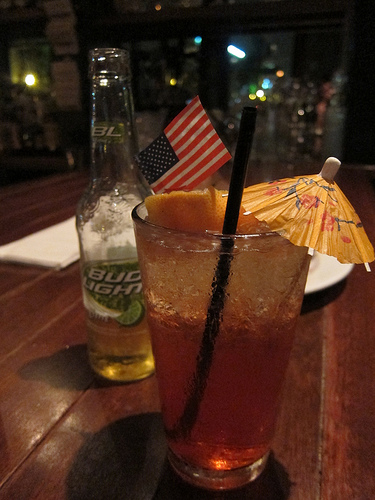 One of the house cocktails is a Campari & soda served with a Bud Light Lime. I didn’t order such a thing but a person we were with usually got this with Aperol. I found it fascinating how many places served some sort of Bud Light Lime drink or cocktail. I blame Chicago.

For my first cocktail, I chose the Last Date (Pierre Fernand 1840, Averna, lemon, house orgeat) which I liked but I quickly fell in love with my next drink, the West Fens (Willet Single Barrel rye, Aperol, Carpano Antica, maraschino, Jerry Thomas decanter bitters).

I had taken a picture of this on Instagram and one of my UK friends was horrified. He thundered what have the Yanks done with the Scottish egg. Well, first, yes, there’s gravy. And the egg is not completely hard boiled.  So, you get the egg yolk mingling with the sausage and gravy. If we added a biscuit, I’d call this Southern.

But I could see how someone who is used to a non-gravy Scotch egg might not like the no-longer crispy exterior. Still, it’s a good variation.

Oh my gosh, you know how some bars have regulars? Well, one of the ways to build that clientele is to offer something special. At Citizen, they have a 50+whiskey program. You can mark off the whiskeys you’ve tried which I could imagine might take a while. This card is double-sided and it looks like my friend didn’t quite take a year to complete it. Of course, he is there several times a week and usually tries a few new ones each time. 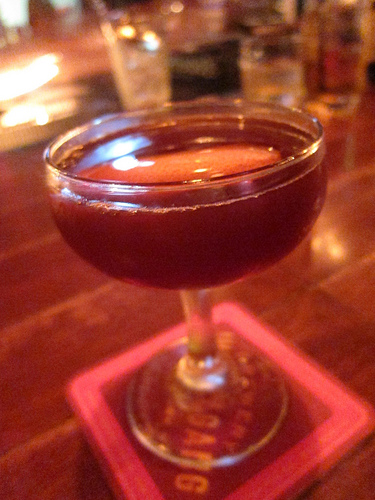 As a special after party to Boston Cocktail Summit, Citizen ran a few specials including a cocktail on draft for a mere $2. The Shubert (Barcadi 8, Dubonnet Rouge, Aperol, maraschino, Fernet-Branca) was on draft. I liked this quite a bit. I don’t know how they made any money this night. Citizen also had a couple of other $2 including the Bourbon Belle (Four Roses yellow label, Mathilde peach liqueur, Carpano Antica, Angostura bitters) and Hanky Panky were darlings. Please note the “unidentifiable” Hanky Panky I refer to in this post is not from Citizen. I loved theirs.

I didn’t try the drink + shot combos but at $5 a pop, I probably should have.

← Boston: Lunch at Eastern Standard Kitchen
Cambridge: Getting Thai at The Similans →