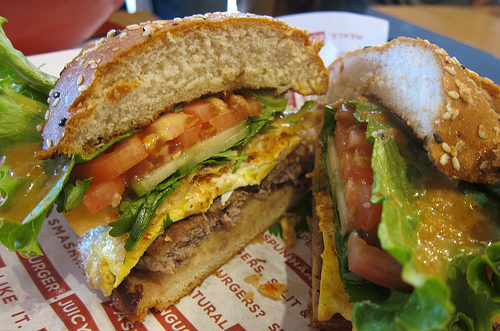 Smashburger is now open  in Culver City. It’s the first outpost from the Colorado chain in Los Angeles proper. There are locations in San Francisco, San Diego and Thousand Oaks as well.

Tom Ryan, the energetic founder of Smashburger, was on hand during the media tasting to answer questions. He’s a veteran in the fast casual industry and you probably have eaten at his former employer burger chain at least once in your life. Besides McDonald’s, he’s worked for Quiznos, Long John Silver’s and Pizza Hut. I found his degrees fascinating- a Ph.D. in Flavor and Fragrance Chemistry, Masters in Lipid Toxicology and his undergraduate degree is in Food Science. All degrees are from Michigan State.

He created Smashburger because he wanted to bring burgers back to American dining– the time when you went out for burgers and a shake or in Smashburger’s case, perhaps craft beer as well. He described his chain as a step above In N Out before you hit the really fancy burgers places.

We were invited to try anything on the menu as well as take a tour of the kitchen. See all the pictures here.

The beef is 100% Angus beef that has been bowl-cut which means it does not go through a meat grinder. It is never frozen. Then the meat is rolled into balls at the store location. The grill is painted with unsalted butter and then the meat ball is placed on the hot grill with parchment paper. It is then smashed down with heavy metal. When it’s fully seared on one side, it’s flipped. Your burger takes about 3 minutes to cook. What’s amazing is the chicken which has been pounded flat also cooks in the same amount of time. I found it interesting Mr. Ryan said Californians tend to eat more chicken than other parts of the country. But if you want to feel really healthy, you could get the veggie black bean burger patty.

My buddy Bobby from 100Eats100Days decided to get the BBQ, Bacon and Cheddar burger while I opted for the Truffle Mushroom Swiss. He got a single patty while I went all the way to two patties. I somehow insisted we also try a salad to be “healthy.” We got the Baja Cobb with chicken. We didn’t need the chicken but it was good to try as we saw what the chicken patty looked like. 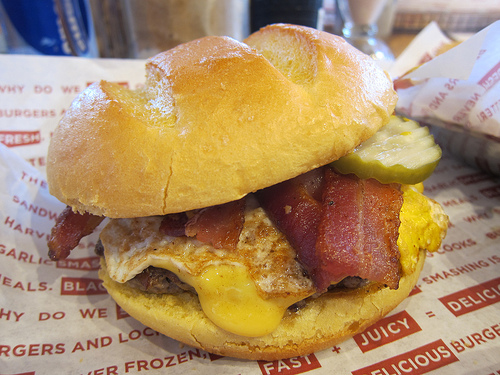 notice the bun on the burger (BBQ, Bacon & Cheddar)

You can add a number of things to your burger including a fried egg. This worked well with the BBQ, Bacon and Chedar and I bet it’d be good on the Classic burger as well.

I was kind of amazed by the meat in the burgers. It was really juicy and it tasted so beefy. The buns were also interesting to me. They are rubbed on a butter roller and then toasted which seals in the bread. Juices and sauces won’t affect the bun for at least 15-20 minutes. So you can get take-out and your burger will be intact. Mr. Ryan has promised there will not be drive-thrus though since he really wants people come in and have a good time. 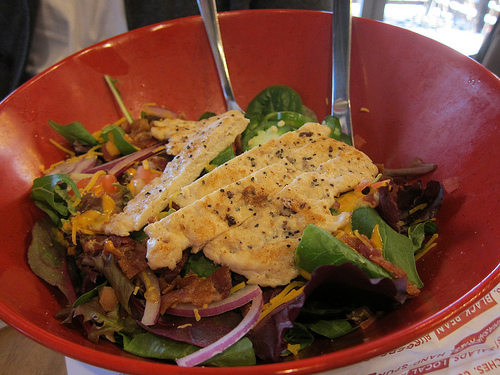 Watch out! That spicy chipotle dressing and sliced jalepenos do sneak up on you in this Baja Cobb salad. I might have to stick with the Harvest salad next time. That sounds good with chicken for a light lunch but I wonder if they’d do a burger patty. Let’s start a secret menu for Smashburger, eh? 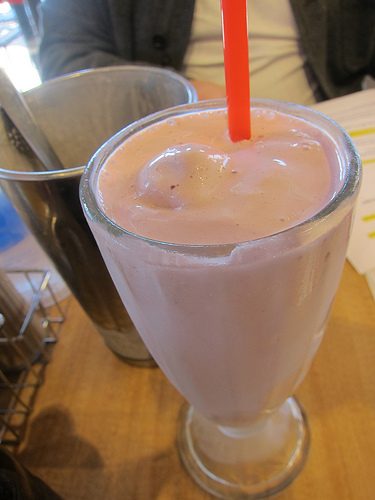 The truffle in the Truffle Mushroom Swiss comes from the truffle mayo. I may actually skip the mayo next time as the burger was quite juicy on its own and the additional cheese made this one a slippery burger.

We couldn’t decline also trying the L.A. burger. The crispy wonton wasn’t appealing to me initially because I pick that kind of stuff out of my Chinese chicken salads. But the wonton “chip” really adds a nice crunch to this burger. I liked the Japanese steakhouse ginger dressing. This burger came on a black and white sesame seed bun instead of the egg buns used for the other burgers. I started thinking this would be really good lettuce-wrapped (see secret menu idea above).

We also tried a couple of sides including the Smashfries and haystack onions. I prefer slightly thicker fries but the thin shoestring onions were great. I’d like to try the veggie frites – flash fried carrots and green beans – hold the carrots (or my friend can eat them) for a healthier alternative to fries. They also have sweet potato fries and regular French fries. The Smashfries tossed with rosemary, olive oil and garlic while regular fries are simply seasoned with sea salt.

With a few friends in the area, I’ll come again with them to see what they think.

One thought on “Smashburger Now Open in Culver City”