Chef Micah Wexler at the Residency at UMAMIcatessen 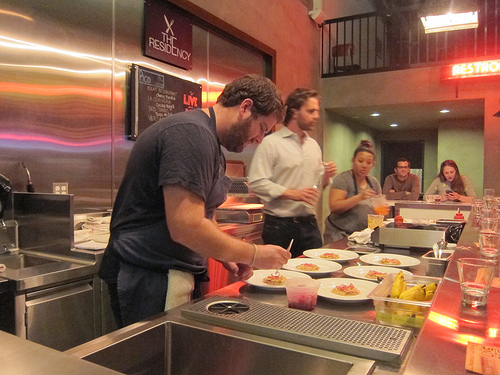 UMAMIcatessen has converted the vacant space left by Spring for Coffee into “The Residency.” Guest chefs will be rotating through the intimate new chef’s counter. Chef Micah Wexler is taking on the first 10 weeks of the Residency with his theme, “To Live and Dine in L.A.” I previewed the first week with the theme, “Pico Boulevard.” Pico has always been fascinating to me- probably because of the Critic’s resolve to eat every restaurant along Pico years ago. 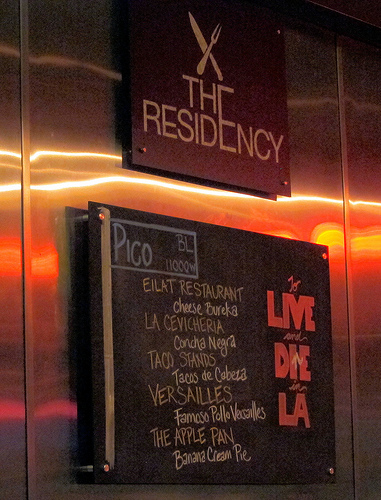 Last week, Chef Micah paid homage to Boyle Heights and I have heard he’s interested in doing something around the San Gabriel Valley. It’ll be interesting in the upcoming weeks to see what else he’s got up his sleeves.

cheese bureka as inspired by Eliat

Although I did a Kosher Pico Crawl a couple of years ago, I must have missed Eliat. These cheese turnovers were great. Very light and flakey with a savory filling.

I’ve been trying to go to La Cevicheria for years. They’re best known for their bloody clams ceviche. Chef Micah outdid himself with this briny chowder-borscht mash-up.

Bloody clams actually have hemoglobin in them. I would imagine anyone who loves rare steak and seafood would like these clams.

First we were presented with a bowl of interesting bits including both bloody clams and regular clams. Then he personally poured our soups.

The concha negra was my favorite dish of the night. It was just so different. I do have to note I’ve only had bloody clams once before but they were frozen and didn’t have the same texture as these fresh ones.

The taco de cabeza was also wonderful. Such piquant peppers and fine cheese. Yet, they did not distract from the cabeza (headcheese). 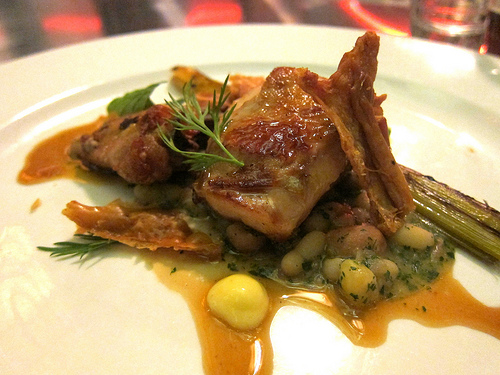 Versailles is a local Cuban chain. I’ve been a fan of their garlic chicken for years. Chef Micah’s more restrained in the vampire-driving away sauce. His secret weapon though was the extra crispy skin he sprinkled on top of our plates after we received them. If you like crispy chicken skin, you would love this dish.

To round out the meal, we had the banana cream pie as inspired by Apple Pan. They’re probably best known for pie besides their burgers. I’ve been there once but can’t recall having the banana cream pie. I want to say we had apple pie. In any case, this dessert goes high end with the deconstructed elements. I enjoyed it since I like banana desserts.

Chef Micah’s residency goes until the end of May and is only on Thursdays. It’s best to call for reservations as there are only 12 seats at this counter.

3 thoughts on “Chef Micah Wexler at the Residency at UMAMIcatessen”