Highlights from the Wine and Spirits Wholesalers of America Show

Wine and Spirits Wholesalers of America took place April 28 through 30 in Orlando this year. The trade show showcases new products seeking distributorship, bartending competitions, seminars and parties. I was invited to attend and judge the beer cocktails competition, Hoptails.

I also tried to catch the other competitions. I checked out Call to Cocktails and luckily caught LA bartender Zachary Patterson of Bagatelle at the Dos Armadillos tequila booth. He made me a fresh Girl from Jalisco (I’ve had a version of this before at Bagatelle) which he submitted for Call to Cocktails.

The drink is normally served in a highball with ice but I had it up and rather liked it that way.

Zach’s drink Girl from Jalisco  for Call for Cocktails competition

Zach was a bit stressed the serrano chiles weren’t as spicy as they could be so he feared they may have impacted his drink. The one I had was great. 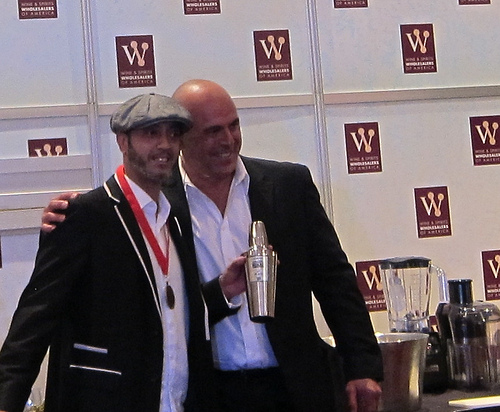 The winning cocktail though went to Ro Patel for his Aroma Coma cocktail with Ty Ku Sake. 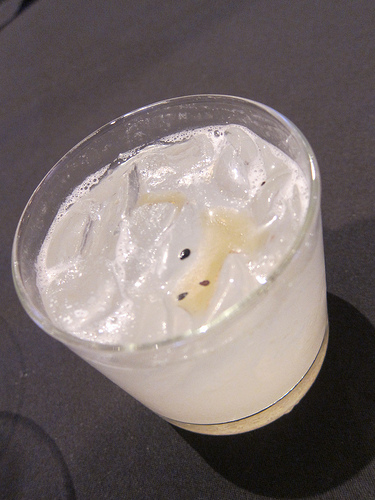 The drink was served on the rocks with roasted sesame seeds and oil as garnish. However, it should have been strained and served in a cocktail glass. Good thing the diluted ice didn’t affect the taste and the judges’ opinions.

With two huge rooms showcasing products not to mention private suites set up for tastings and meetings, I had a lot to get through in a couple of days. First, I stopped by the Organic Mixology (OM) cocktails booth. OM cocktails are ready-to-drink and available at stores such as Whole Foods and Gelsons. Created by Natalie Bovis, the Liquid Muse, the cocktails are all natural and USDA organic certified.

Having tried a few other prepared cocktails on the market, I really like OM because it’s not artificial and sugary. Instead of opening a bottle of wine, you could try a bottle of OM at your next party. 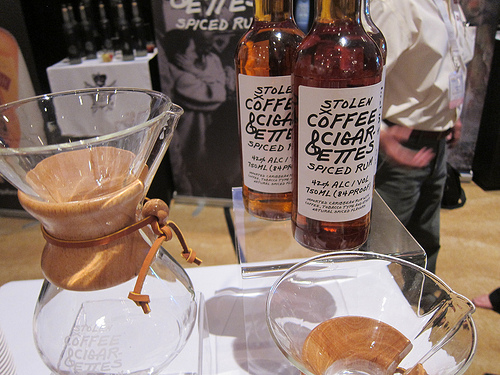 I was intrigued by Stolen Rum and particularly their Coffee and Cigarettes spiced rum. It had a nice spice to it and wasn’t cloying. there was also a good body to the rum, something I find lacking in other spiced rums. 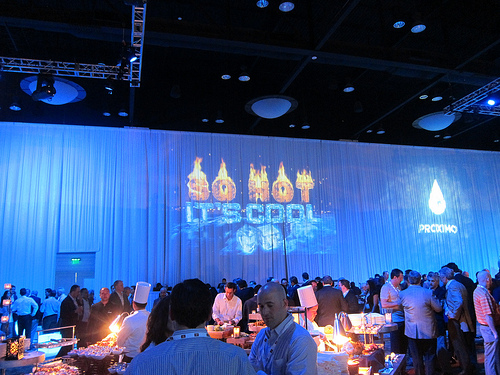 As mentioned there were plenty of parties. I attended Blue Chair Bay Rum‘s pool party and the welcome party. Sadly, I couldn’t stay for the XB party but now I know there’s such a thing as bottled Sex on the Beach. I also went to a spirited dinner with Tallarico Vodka (dinner post coming soon!).

more from the Welcome Party

The welcome party gave an opportunity to network and mingle with those in the spirits industry. With all that booze available, what did I drink? I had Sazarac whiskey on the rocks and Campari and soda. Cocktails would come later — I’ll be posting a recap of my Orlando bar crawl soon. 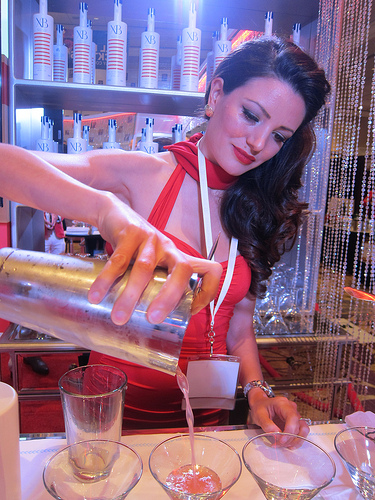 XB- bottled Sex on the Beach

Ready-to-drink cocktails do very well at crowded bars and clubs. I expect to see it soon in LA’s Hollywood clubs.

But wait, you’ve heard of whipped cream flavored vodka but what about putting the booze directly into a whipped cream bottle? Yes, people, it has happened. I fully expect this and many other products I saw waiting for distributors to actually be picked up and then showcased at Nightclub and Bar show next year.

Then there were some products I wasn’t so sure about. There’s Pruno, vodka based on prison wine (which is usually made with moldy bread and fruit scraps in a plastic bag in prison). Pruno however is made with vodka. With two flavors available, I tried the grape. It tasted like cough syrup. There’s something to be said of authenticity though. I am not really sure who their target market is.

I also spotted Vodquila which was basically created when a daughter suggested to her father to mix his favorite things together. And Vodquila was born. The target market is an easy one to figure out but will they get someone to distribute? Time will tell.

Competing with Ole Smokey Moonshine comes Short Mountain Distillery. It was only a matter of time more legal “moonshine” would hit the market. I tasted the Apple Pie flavor and was first surprised by the whallop it packed. I know it’s “moonshine” but I was thinking of their competitor’s moonshine which is at a much lower proof.

I haven’t seen this yet in LA but I did recently spot yet another moonshine, Midnight Moon, at King Eddy’s recently.

Many booze enthusiasts are weary of the flavored spirits out there but there seems to be a growing trend of flavoring whiskey and tequila. I suspect because they’re trying to appeal to a young, female audience. And this is how you end up with a strawberry flavored whiskey like Sweet Revenge. Although I didn’t spot the word “whiskey” on the bottle when I looked, its implied by the “sour mash” (which is in quotes).

Moving on back to safer territory, I stuck to mostly unflavored stuff. I noticed El Zacatecano Mezcal which they’re marketing as El Zac.

It didn’t have much smokiness making it a good mezcal to use for mixing. You’ll get just a hint of it at the end. Or you can of course do shots. Try sprinkling cinnamon on orange wedges to munch on after a mezcal or tequila shot instead of lime and salt.

At first I only wanted to taste the anejo but got convinced I should taste them all. Usually when I do expressions tastings, I tend to like the middle product. And I found that to be true with Scorpion Mezcal. I did like the anejo but the reposado was great too.

They did also had interesting blends in addition to the silver, reposado and anejo. 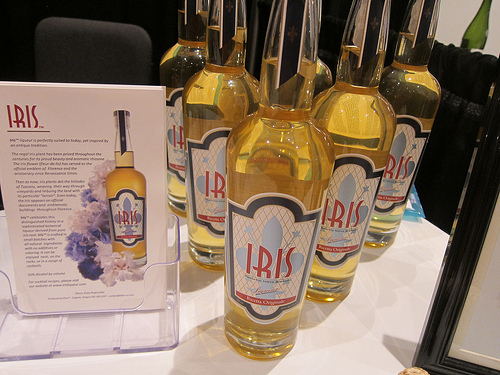 My favorite product from the show was finding Iris. From the makers of Calisaya.  Iris is based on an old French recipe. The liqueur would be a great modifier for cocktails. I’d use it in place of something like St. Germain. Or you have it on the rocks. I would also be interested in using it in place of Lillet Blanc in recipes.

I didn’t try any wine this time around but will make time next time when they’re in Las Vegas. WSWA’s trade show alternates between Orlando and Las Vegas.