Last month, Eater held their Young Guns awards party the Los Angeles County Museum of Art (LACMA) in Los Angeles. The party celebrated 15 finalists who had either been in the industry for 5 years or less or were under 30. Los Angeles had one Young Gun- Hourie Sahakian from Shortcake. She was there serving her delicious pastries along with 9 other chefs.

I attended this event as my last event on Eventbrite’s Blogger Tour.

I saved the best for last but I really should have gotten to Hourie’s table right away. Almost all of her desserts had been wiped out but I did snag a brownie. It was densely chocolate and perfect.

People had a lot of fun at Chef Mike Brown’s table. He had everyone hold out their hands and then he proceeded to plate your hand with burrata and and cherries complete with greens, dressing and crackers to be clutched between your fingers (note the red heart is my ring and not edible).

I spoke with Chef Mitch who had just flown in that morning. He said he had prepped about half the food in Chicago which was just amazing to me. Did he really fly hulled lemons halfway across the country?

Some of the food came from chefs on-site including ceviche from Chef Jason Fullilove who is the executive chef at LACMA.

Chef Jeremy made sure to cover all his bases from his burrata appetizer, pork belly and even a little sweet to end. I am curious about Restaurant Eve and hope to visit the next time I’m in the DC area. The pork belly was great and had a wonderful sauce.

Ray’s and Stark Bar’s Chef Kris probably had one of the most popular dishes. He served a deliciously fatty pork jowl. And when the other vendors ran out, he kept appearing with more pork. That man knows how to keep food festival goers happy.

Over at Underbelly’s booth, they served one of the most popular treats. I wonder how many people could count that as their first experience eating beef shins? It was intensely flavorful with the kimchi. 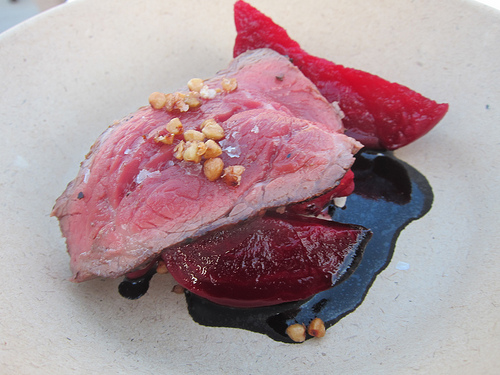 I chatted with Chef Matt from Nashville. He had been amazed by the produce we Californians have and he decided not to macerate the Harry’s strawberries he picked up for his teak dish. I loved that when Underbelly was out, they came over to help him out. The culinary camaraderie. 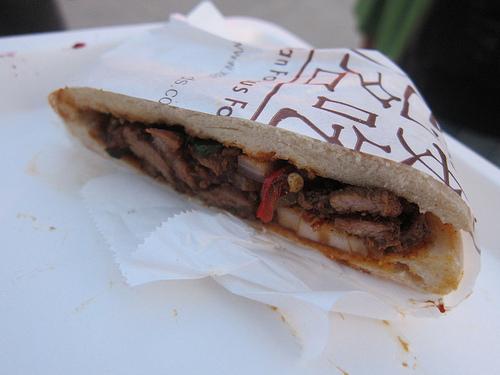 By this time I was so full I couldn’t eat the lamb burger from Xi’an. Jason Wang’s story is an interesting one. At just 25, he is the President of Xi’an which has a handful of locations in New York. His dad started Xi’an and now Jason has taken over the family business. 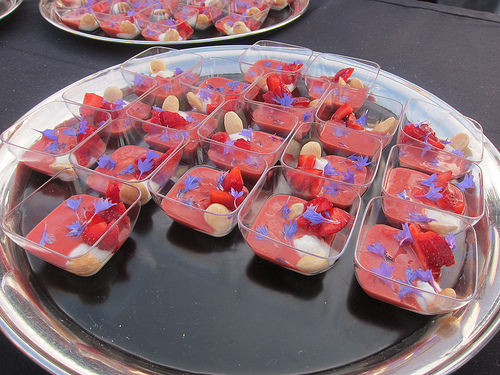 When I visited Manresa last year, I found my visit so incredible, I was never able to write about that magical meal that included a visit to Chef David Kinch’s kitchen. At that time, I observed how everyone worked in perfect harmony and intensity. I saw that again at this event. Manresa’s Chef de Cusine Jessica worked in tandem with another to pump out trays and trays of strawberry gazpacho.

It was a low-key party with tasty tidbits. The only thing I would change would be more winners from Los Angeles!

This post is part of an ongoing partnership with Eventbrite LA. Eventbrite enables people all over the world to plan, promote, and sell out any event. It’s also a destination for people to discover awesome events going on in THEIR city! Whatever your desires, hobbies, or interests – from photography workshops and wine classes to food festivals and industry conferences, there’s an event on Eventbrite waiting for you to attend! Keep up on the goings-on in LA by following Eventbrite LA on Twitter, liking them on Facebook, or signing up for their monthly newsletter! Planning an event? Go ahead and create an account to get started.

← What Do You Know About Bibimbap?
West Hollywood: New Cocktails at the Hudson and Throw Back Thursdays Mac & Cheese Nights →