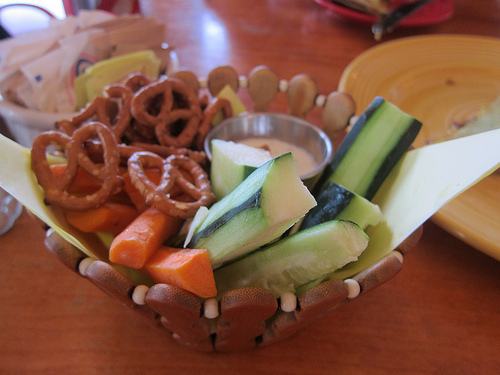 The gay boyfriend has moved and so we’ve been exploring his new neighborhood. We decided to go to Grub. The cafe is in the neighborhood and even though it’s a few blocks from the main drags of Santa Monica and Melrose, Grub gets busy with the locals and people from the nearby studios and specialty shops. I saw small editing houses and special effects shops. Grub is actually not far from the upcoming Rao’s but I imagine people will still want burgers, the generously sized salads and non-fussy sandwiches.

Instead of a bread basket, Grub gives you pretzels, carrots and cucumber. It made for a nice change in pace.

For an appetizer, we decided to get the apple bacon quesadilla or known on the menu as the “crack” bacon quesadilla. Unfortunately they just ran out of sourcream but it really didn’t need it as it was exceptionally cheesy. I liked that the quesadilla wasn’t greasy.

Back in the day, we used to go to Doughboys quite a bit. That was were the gay boyfriend would get a tuna melt. He said Grub’s tuna melt was as good as how the old Doughboys was. That’s saying a lot since he loved them.

I wasn’t particularly hungry for a heavy entree or otherwise I would have ordered a pulled pork sandwich or maybe the Creole shrimp po boy. I decided to go “healthy” by ordering the shrimp cobb salad. It turned out to be massive and extremely pretty. Looking like the centerfold of a foodie mag, the cobb has the usual tomatoes, bacon and bleu cheese along with 7 fat fresh shrimp. I couldn’t eat more than a third of the salad. This would be great to share.

I’m sure I’ll be back again. Perhaps I’ll try the carnitas wrap or one of the burgers as a salad next time.