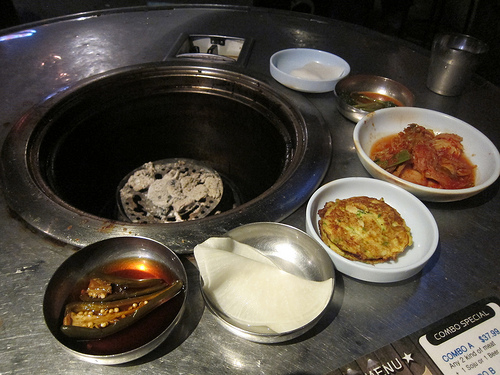 banchan around the charcoal grill

For some reason, I always thought Dwit Gol Mok or DGM as most people call it, was a noraebang (karoke) bar that served food. When I randomly decided to have dinner in Koreatown, I had intended to go across the street to a porridge place but then saw DGM was actually a Korean BBQ restaurant. Since I don’t get to KBBQ that much, I dragged my friend inside the smokey, charcoal grills restaurant.

The banchan selection was standard. We did really enjoy the panjeon (pancake) and they happily gave us another when we asked. Usually other Korean restaurants don’t refill pancakes. DGM also had the best steamed egg custard and I thought about getting another one but our meats were starting to hit the table. 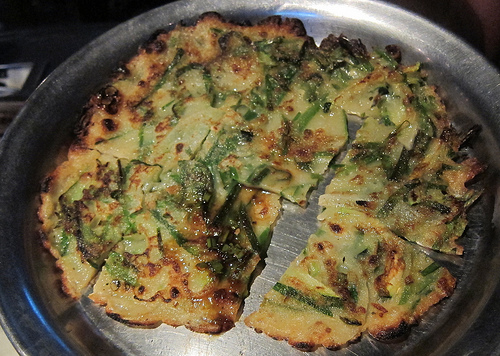 For the first round, we ordered beef, pork and the “meat in between ribs.” I hadn’t seen that cut before and was curious. 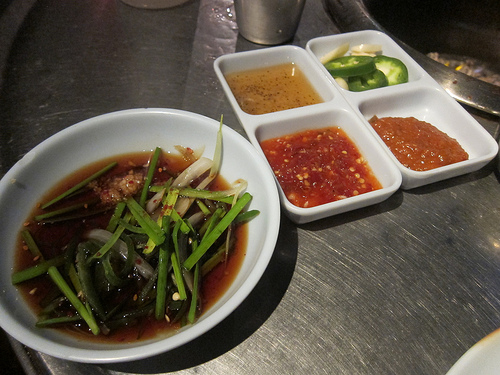 DGM has the usual chili, sesame oil, gochuchang (red pepper paste) as well as the garlic and jalepeno pepper slices on the table but we were also given a sauce I hadn’t had before. It was closer to salad dressing but had a ton of leeks in it. It was a good sauce to pair with some of the fattier cuts. 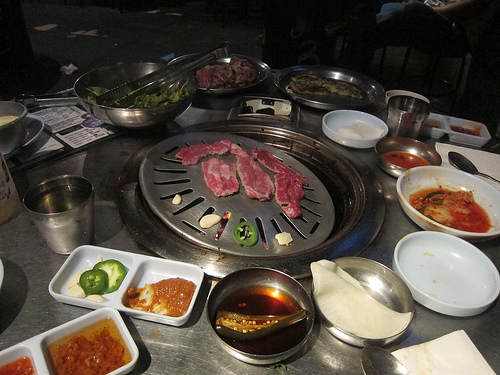 The meat in between ribs turned out to be these cute ovals, just about perfect for rice paper wraps. 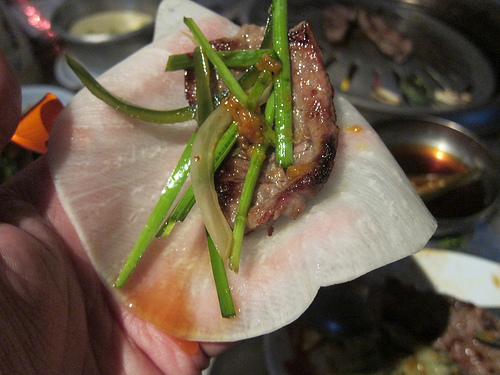 We also had some radish wraps that were bigger than your usual rounds of daikon. I probably should have asked for more of these instead of rice paper but I do love my noodles.

I tend to load up my wraps with a bit of kimchi, maybe a dab of sauce and possibly a dip into the chili sauce. Or I eat the freshly grilled meat with salad, a lot of salad. We refilled our salad bowl once. 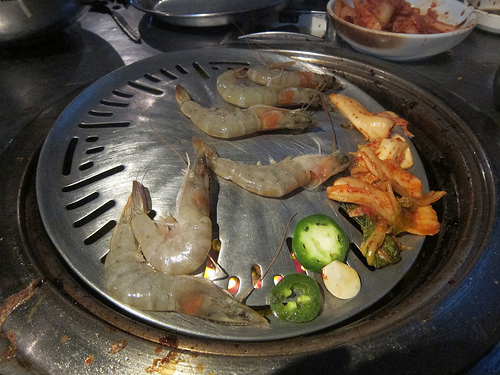 The best was getting the shrimp to grill. Perhaps we should start with that next time. I always seem to get seafood last at KBBQ places.

DGM was open late. We didn’t roll out of there until nearly midnight. It’s good to remember the next time I want to grill in K-town.