There are two kinds of brunch drinkers- Bloody Marys or mimosa drinkers. Those who like Bloody Marys appreciate their boldly flavored drink. Often described as a meal in a drink even the stingiest airport bar will have at least a wedge of lemon or lime and an olive or two in their Bloody. But if you’re lucky, there’s a stick of celery.

Franklin and Company in Hollywood has a Bloody Mary menu which includes the Bloody Royale, a serious meal as a drink. Not only does it have celery and olives, there’s a slider, bacon wrapped jalepeno pepper and a couple of onion rings. The pickle, cheese cubes and half a Brussels sprout is garnish on top of the garnish.

I asked for mine with gin making it a Red Snapper. I would call it a Red Snapper Royale then. After taking most of my garnish out of the drink and arranging it on a plate, I attacked my mini meal and thought this was a really reasonable “brunch” for $15.

Franklin & Company is so clean and neat that I thought I was on a TV sitcom set. But instead of canned audience laughter, expect activities every week like Bourbon and Sliders on Thursdays and there’s even a list of pay-it–forward type drinks. You can purchase a beer for a buddy and they’ll write it on the board until the next come in. Much better than a gift certificate. 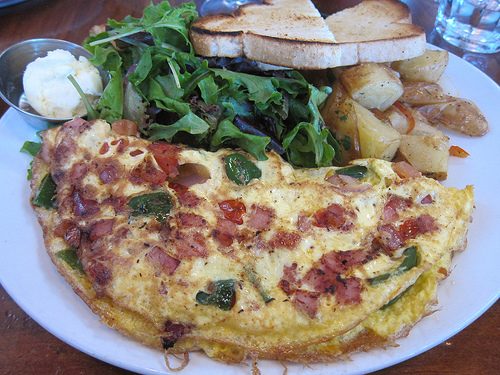 The brunch menu is deceptively simple. Did I want the three-egg breakfast which includes potatoes and a choice of protein; ham, bacon or veggie sausage. or did I want steak and eggs? Oatmeal, griddle cakes, salmon benedict and chilaquiles also stood out to me. But in the end, I chose to make my own omelette. I said I wanted something like a Denver or Western style omelette and Franklin & Co delivered. Served with both a side salad and potatoes as well as toast, it was already quite a filling meal on top of the mini burger I just ate. I know there are three eggs in this omelette but it felt like a whole dozen. Some likened my omelette to half of a medium pizza.

Earlier I mentioned the mimosa drinkers. Okay, I can get down with $3 mimosas, too. Although I did start looking at the rest of the Bloody menu. For those who think they can’t handle such an amazing Bloody, here are the options-

Sriracha Bloody Mary – the spicy Bloody is garnished with a pickled tomatillo slice.

Bloody Marnier – this sounded interesting to me as it’s made with Clamato versus the Franklin & Co’s house bloody mix.

Bloody LeRoy– horseradish, BBQ sauce and onion rings? I can get down with that.

Bloody Maureen – made with Guiness and house bloody mix. Sounds like a mash-up of a michelada and Bloody.

Mezcal Mary– I’m not the only one to switch out the vodka. This Bloody uses mezcal for a smoky punch.

Or you can choose a regular, plain ol’ Bloody Mary. I bet it’s still good.

My friend got the chilaquiles which were really good. Our server said it was one of their best sellers. I sneaked a bite and I liked that some of the chips were still crispy. Just like breakfast— nachos.

Now who wants to get Bloody.. er, Red Snappers Royales?

One thought on “Hollywood: The Amazing Bloody Royale at Franklin & Company”