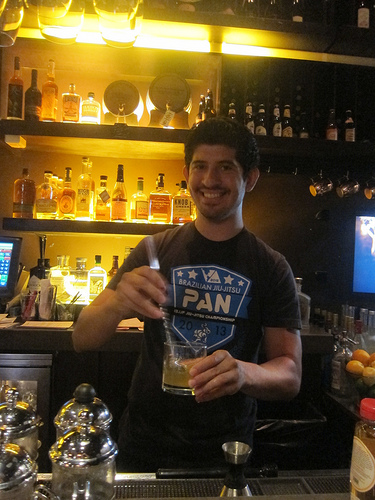 A lot can change in a few short years. I would have never predicted Vertical becoming hip or would develop a decent cocktail program a couple of years ago. But they owe a lot to their current chef, Laurent Quenioux. He’s had a few pop-ups around town but it’s fun when he has them at Vertical because it gives me hope the mostly American comfort food items will give way to Chef Laurent’s amazing creative cuisine. Perhaps we might see a menu change soon.  And it sounds like that may be the case with a market going downstairs and more room for the pop-ups.

After my last pop-up dinner, Chef Laurent encouraged me to really look at the bar. I admired the small yet tidy collection of fine whiskies and spotted the cool new gin, Sipsmith Gin. The cocktail list had changed to mostly classics and well-known modern cocktails. I chatted with bartender Angel who told me the bar staff was mostly self-taught. They all started at the bottom as bar backs and servers. They got a barrel and are experimenting. It was like watching someone fall in love for the first time. They’re very excited for the emerging cocktail program.

However, he didn’t quite have the patter down yet. He asked what I wanted to drink and I mentioned I was in the mood for rye. He pointed out his picks for whiskey drinks– not of which were rye cocktails but I forgave him and ordered the Penicillin. Vertical makes theirs with Dewars Scotch, Domaine de Canton, lemon, agave and a Laphroaig mist. 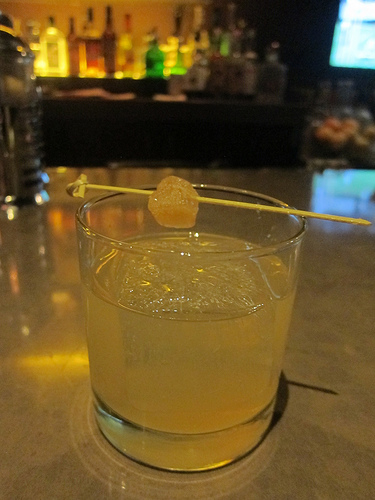 It wasn’t quite the version I’m used to from Sam Ross as it wasn’t that smokey but it would be good for a new-to-Scotch drinker. Later Chef Laurent asked what I would have done to improve the cocktail and I mentioned they should make an agave syrup. The agave had been squeezed directly from the bottle which meant they had to shake harder to incorporate the agave into the cocktail. Still, I did enjoy the drink and had a good time at the bar talking about the Pasadena craft cocktail scene which means pretty much 1886. Give Vertical a chance though. Who knows who’ll turn up to guest bartend in the near future.