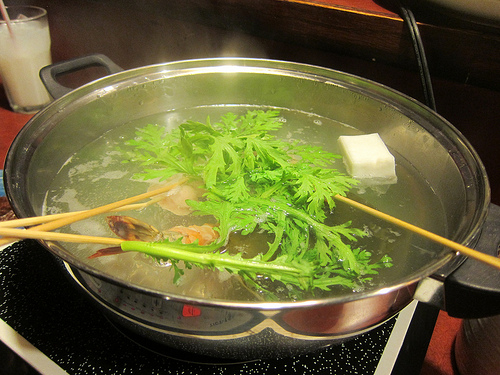 There’s a shabu shabu place in Little Tokyo that is always packed and I’ve never tried because I’ve never waited for one of the few seats in the small restaurant. Instead, I usually go to Kushi Shabu where they feature all-you-can-eat beef or pork shabu shabu. The last time I went, I was with a seafood-loving friend however so we stuck with the seafood combo.

Unlike Chinese hot pot, Japanese shabu shabu features a pot of hot boiling water instead of soup. The flavoring of your meal comes from swiping your food through a couple of sauces, adding green onions and grated daikon dyed a brilliant reddish pink. I usually dunked my food into the ponzu-soy mixture to cool then dabbing at the miso paste. I added the daikon and green onion to my rice. To supplement your meal, you had a small dish of pickles. 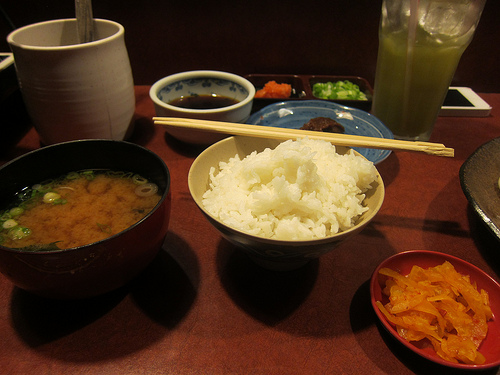 rice and all the fixings

I thought it was kind of funny we had miso soup but as mentioned, the shabu shabu pot is not flavored.

While we waited for our food to cook, I thought about ordering some items from the kushi (skewers) menu but decided to see how we fared with our seafood combo. 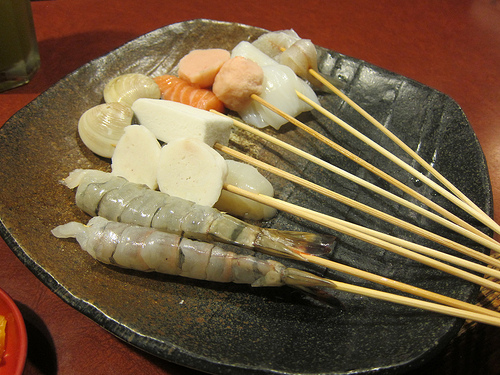 The seafood combo comes with clams, shrimp, fish, scallop, squid and balls of shrimp and fish paste. I liked the tiny fish, salmon and shrimp best. You also get a plate of vegetables, noodles, tofu and mushrooms.

After we were done, I think getting the all-you can eat pork or beef combos would have been better. It may cost more but you can swish swish (shabu shabu) to your heart’s content. Or at least to a full stomach. 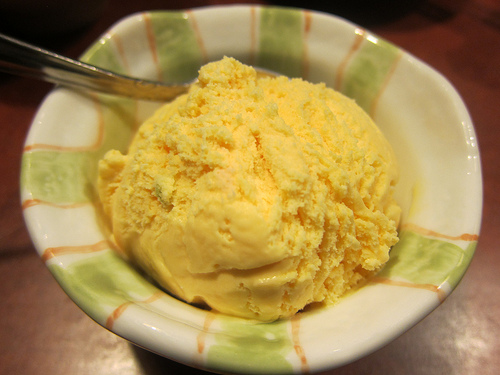 At least our meal came with ice cream. I had mango while my friend had lychee. It was good but I was dreaming of a second dinner.