eggplant with pork and olives

I spent the winter holidays in Northern California. For Christmas dinner, we went the “traditional” route and had Chinese food. After a quick consultation with my cousin, we decided on Cooking Papa in Santa Clara. They’re known for Peking duck.

Once I looked over the menu, I decided it wasn’t a Cantonese seafood restaurant. There weren’t banquet style dishes but rather “homestyle,” a mish mash collection of dim sum, Chinese BBQ and Hong Kong cafe (interpretation of American classics). And with a diverse group of friends celebrating Christmas, we decided to order what we liked ordering so our meal didn’t have a common theme other than “Chinese.”

Growing up, I ate Peking duck once or twice a week. I felt I ate it more than chicken though that is probably untrue. I got tired of it in my teens and rarely eat it these days. But I have become nostalgic for a good Peking duck. We got a half order and ate pieces of the crispy skin with little white buns (bao). 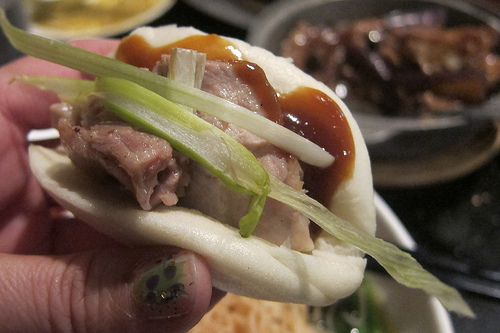 You’re supposed to stuff the bun with a piece of skin (meat optional), a bit of scallion and slather on some duck sauce (in this case, it was Hoisin). I found the duck to be very fatty but flavorful.

I didn’t try the BBQ pork rice rolls (cheung fun) but did take a bite of the rice noodle itself. It had a good bouncy texture unlike any rice rolls I’ve had before at dim sum restaurants.

We also got an order of soup dumplings (xiao long bao). The dumplings were quite juicy and well formed. I liked them quite a bit.

I couldn’t resist getting beef brisket and wonton noodles soup. The brisket was sliced more American style than Chinese. I liked this slice style because the meat was actually more tender this way, not to mention there was a lot of beef.

We also got beef curry (not shown) and eggplant with pork and olives. I neglected to notice the olives part. I could have done without the olives but it was still a very tasty dish. I didn’t try the curry but heard it wasn’t up to the level of deliciousness of the other dishes. Overall we had a good time and I’d probably come back more for lunch than dinner.