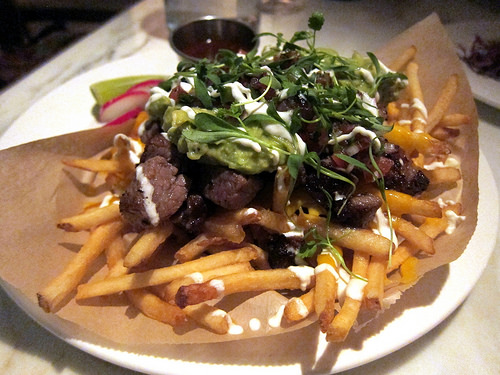 The Los Angeles outpost of Herringbone recently opened at the Mondrian a couple months ago. The original location in San Diego is known for seafood and the LA one carries on this tradition. Herringbone is such a beautiful space. You could do a mini “crawl” just by starting the night off at the bar for a drink, eating your meal indoors and our server had a great idea to finish off dessert on the patio.

It may then seem unusual that we ordered a rather land animal-heavy dinner. We couldn’t resist the carne asada fries, the simple street food elevated to a delightful version fit for the Sunset Strip. With tender beef and crispy fries, the asada fries was one of our better dishes. 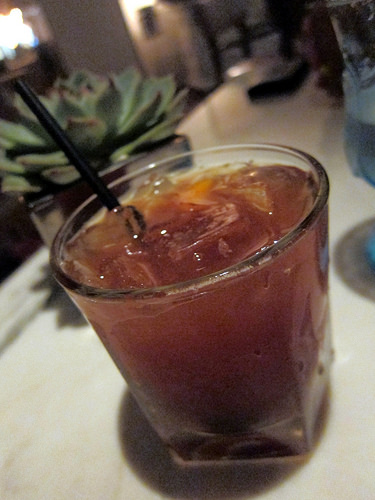 I started the evening with the Bad Boy T-Roy Brown. With such a great name, I was a teeny bit disappointed to realize it was an old fashioned – prohibiton (not pre-prohibition) style. This drink had a bit of muddled orange and cherry. It was fine but I tend to like the old fashioned cocktail without the fruit.

Our favorite starter was the lamb tartare with the cute quail egg to mix into the tartare. The trend has been using potato chips as the delivery system for tartare lately but I’m glad Herringbone stuck with more traditional bread. But the bread was extremely thin and crispy like chips; the best of both worlds. 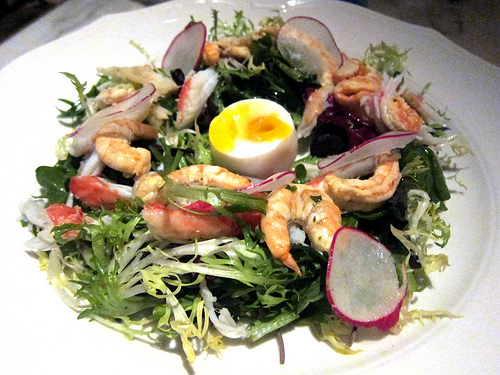 I was excited to try the shrimp and king crab louie salad. The seafood was marinated with a dressing of spices and not just poached. I liked the crab and the egg best.

I generally avoid anything with vanilla syrup (preferring to get that flavor from straight whiskey!) but I was persuaded to try the Trophy Wife since it had such a funny name. Made with silver tequila, it was actually not too sweet and it was perfect with our meal. I also prefer the more bitter Campari but the Aperol worked really well in this drink. 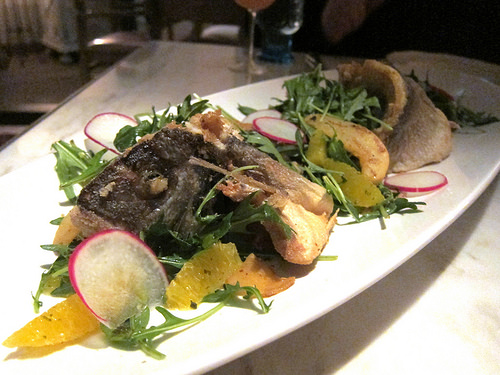 We were trying to decide which fish to get. I was leaning towards the trout but our server recommended the whole sea bream. It turns out this is one of Herringbone’s signature dishes. It was really quite different with harissa roasted pear. It was also served with a vibrant lemon dressing. 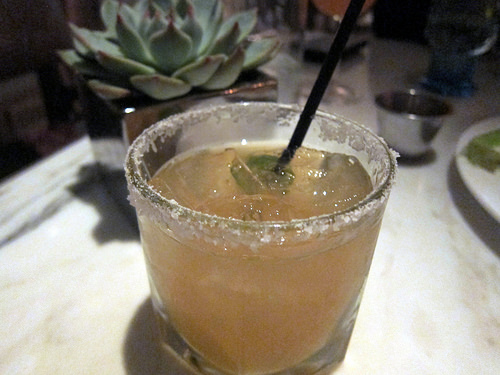 Jalaberry Strawpeno isn’t a difficult cocktail name when you think of Halle Berry for the first part of the name. It’s essentially a strawberry margarita and would be a lovely drink to sip on the patio. 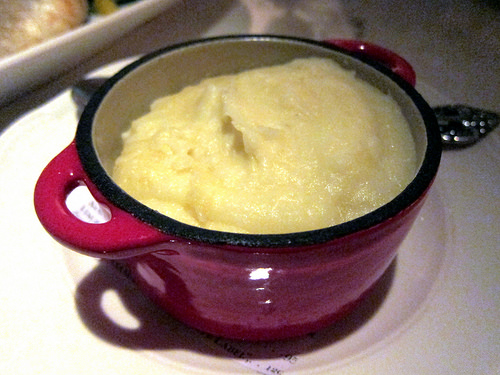 For a side, we got the mash which had an one-word descriptor, “buttery.” They surely were! I enjoyed eating the mashed potatoes with the sea bream, co-mingling the flavors together.

We were so full but the restaurant sent out three desserts. How could we resist the donuts with Buffalo Trace bourbon ice cream? That was probably my favorite even without tasting the others. But to be fair, I made sure I had at least two bites of each.

My friend loved the creamsicle best. For those who like non-chocolate desserts, this is your jam. The citrus was so fresh.

And we both liked the s’mores. It was such beautiful presentation. We destroyed those desserts like Godzilla smashing through a city. It was pretty frightening we ate it all even though we were technically full. We had to take a quick lap around the patio and lobby to work off the indulgent meal.

Herringbone at the Mondrian