The Church Key recently introduced brunch which seems to be a national pastime of Angelenos on the weekends. Brunch is currently available only Sundays at Church Key from 10 a.m. to 3 p.m.

I couldn’t resist ordering the burger which I do recommend getting a fried egg with it. It tastes almost exactly like an In N Out burger but even better because of the fried egg and slight spice from the pepperoncini slaw. It’s served with gratin fries. Imagine thin layers of potato stacked up gratin style then deep fried. It’s definitely a new take on fries!

drinks by the cart

We started off with some drinks from the cart though a full menu is available. I opted for an Aperol Spritz which is poured table side.

Wouldn’t it be fabulous if airlines offered real cocktails (instead of just a plastic cup with a mini and a mixer) by the cart? Until then, we have the Church Key.

Like dinner in the evening, there are “American dim sum” carts that rove around offering both sweet and savory pastries. My friend tried out the monkey bread which she loved.

inside of the bagel bite

I’m more a savory girl so I wanted the bagel bite which had been stuffed with cream cheese and bacon. It was the perfect snack. 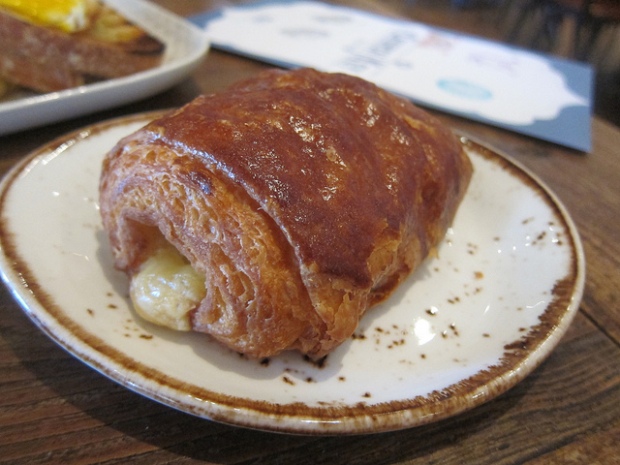 I also shared the ham croissant which was perfectly flaky like a good croissant should be.

It’s time for another drink from the bar cart! This time I tried the canned Bloody Mary. I had it with tequila making it a Bloody Maria.

grilled asparagus with sunny side up egg

For those who want to keep things light, I recommend the grilled asparagus with sunny side up egg. The yolk was enormous! There was enough to spread around the asparagus and to dip the bread in.

My friend had the German souffle pancake which she requested syrup for since it came with only powdered sugar and a lemon to squeeze.

I would love to go back to try the Toad in the Hole Croque Madame and biscuits and gravy. The biscuits sound particularly good with chicken sausage and topped with a sunny side up egg! Or if you can’t decide, just keep waiting to see what new bites the carts bring.

← Tapas at Smoke.Oil.Salt
Pasadena: All the Pastas and More at Union Restaurant →

4 thoughts on “West Hollywood: Brunch at the Church Key”