Sonny’s Hideaway in Highland Park just started doing Tiki Tuesdays. And they have a new chef Alexander Abdel-Monem. He was promoted from within when their former chef left so you’ll still see some Sonny’s favorites along with some new items for the summer.

After looking over the tiki drinks menu, I zeroed in on Jolly Roger. I had just started seeing bottles of Creme de Noyaux from Tempus Fugit come onto the market and was excited to try it. Head bartender Kelly also had me taste Noyau de Poissy. Noyau(x) means kernel in French. It’s generally made from apricot pits but can be made from others. Tempus Fugit makes theirs with both apricot and cherry pits. The difference between the Tempus Fugit and Poissy is immediately noticable. The Tempus Fugit smells just like almonds which as I understand is what a Noyau is supposed to be like. Some use it like the Italian amaretto (almond liqueur made sometimes with apricot pits). The Tempus Fugit one is also a little bit sweeter which makes sense since it’s a creme and cremes have more sugar than liqueurs. The Poissy was more subtle and I wouldn’t mind just sipping this on the rocks. Or possibly made as an old fashioned cocktail.

The other interesting ingredient in the drink is the Yerlo, a rice spirit being distilled by Lo Distillery in Wisconsin. The high proof Hmong spirit is based on a family recipe.

Finally a little rum is poured into a halved apricot and it blends in a little bit at a time as you drink. It’s a very different yet recognizable tiki cocktail. 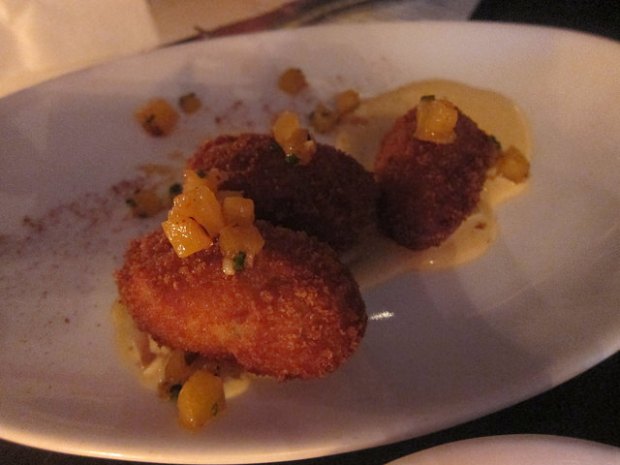 There are a couple of food items on the tiki menu. We tried the smoked ham croquettes which reminded me of Polynesian ham and pineapple flavors.

I was really happy with the Headhunter’s Repentance. The whiskey tiki drink showed its tropical colors with the addition of toasted coconut. I also liked how the chai made it just creamy enough.

Some new dishes include the braised meatballs. I am happy to report they pass the Minty meatball test and I’d order these again. 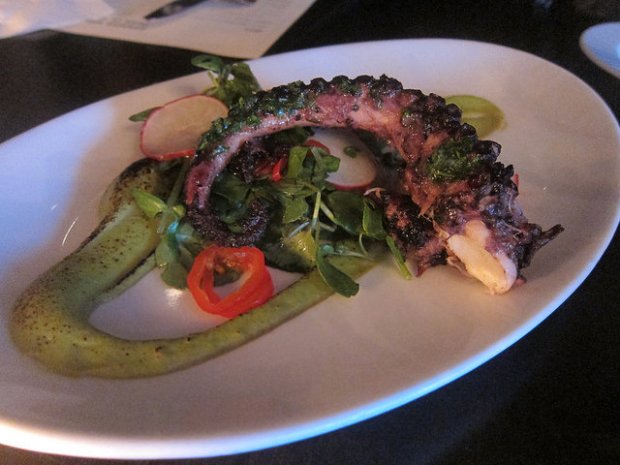 The grilled octopus isn’t a new dish but we couldn’t resist it. It was very tender and I enjoyed the sauce and little salad it came with. 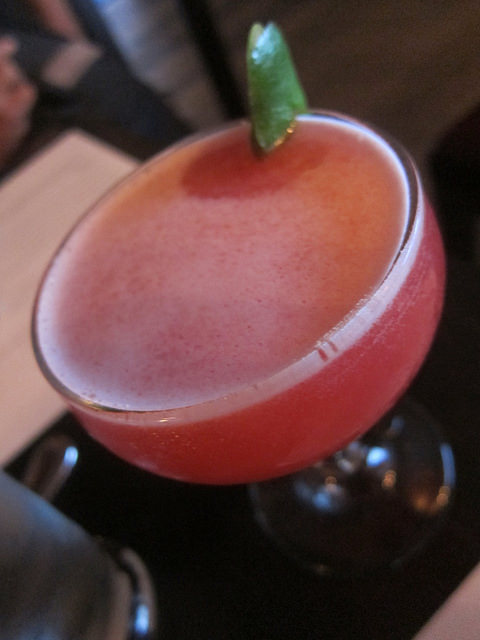 As far as pink drinks go, the O Paradis can be deceiving with a whack of mezcal but the floral character of the Chareau and pamplemouse rose shows that spirit how to curtsy and be a lady. I was afraid initially it’d be too sweet for me with the addition of plum preserves but lime juice is a miracle worker and keeps it balanced.

With our hot weather, it’s nice to have a light dinner of seafood. Get the mussels with housemade Merguez sausage and smoked leeks. Be sure to sop up the sauce with the buttery bread.

I recently came across Sapins liquer at General Lee’s in Chinatown. I was happy to find it at Sonny’s Hideaway and intrigued by the Dorothy Vallens. Sapins is a bit like a smokey Chartreuse to me. Along with a backbone of rye whiskey, the lovely Cynar and rounded out by the orange flavored China China Amer, the result was my new go-to at Sonny’s. Brown, bitter and stirred was represented very well.

Chef Alexander says he’s not a pastry chef but he came up with a wonderful deconstructed s’mores variation. You really can’t go wrong with chocolate for dessert. It comes with bruleed marshmallow and chocolate crema.