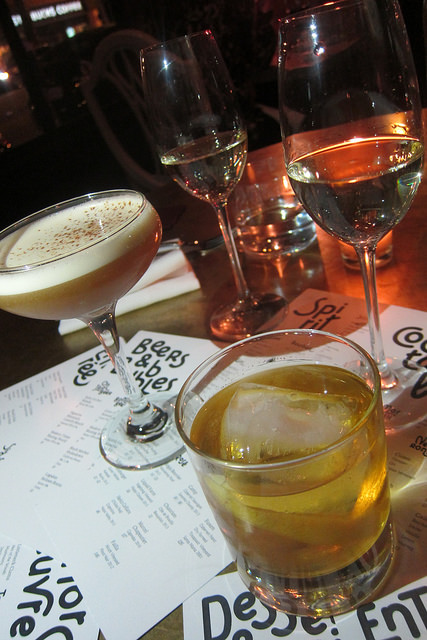 Cadet opened in Santa Monica a few weeks ago. Chef Kris Tominaga heads up the kitchen that’s focused on French fare. Quite a bit of the menu is focused on the wood burning oven. What’s neat about Cadet are all the sides that come out with your meal. Some have called it Korean banchan-like. Expect pancakes, lettuce, tomatoes, condiments and pickles.

Gabriella Mlynarczyk runs the bar at Cadet. Formerly of Ink., about half the opening drinks menu are her cocktails. The drinks list is divided into 6 drink types; Effervescent, Martini, Margarita, Negroni, Old Fashioned and Sour. And then there are three options; Traditional, French and Cadet. For instance, you could get a Margarita. Go with either the traditional with tequila or the French version uses mezcal and Yellow Chartreuse (so French!). The Cadet version uses sherry and orgeat. 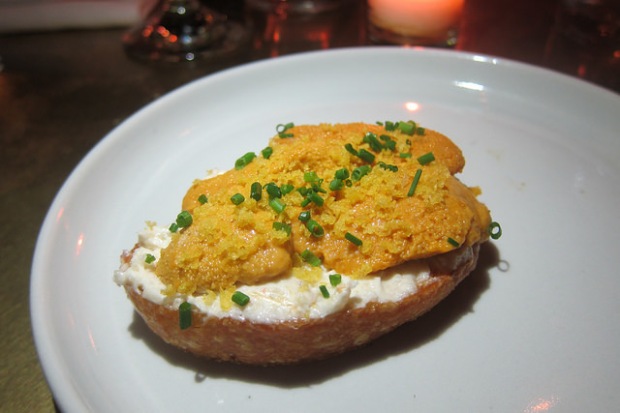 The sea urchin is part of the tartines menu. It seems a little on the pricier side at $12 a pop but it was some of the freshest uni I’ve had in a while. If you want to splurge, don’t share with your dining companions.

Or you can get the beef tartare tartine and share that as well. This was wonderfully fresh, the only way I’d eat raw beef. I love that there was marrow mixed in as well.

As mentioned, you can have some traditional renditions of drinks. Under the Sour category, the traditional is a pisco sour. This was well-executed.

On another visit, one of the best appetizers we tried was the rabbit boulettes. Our server even advised us to keep the dish after we devoured the pillow-y dumplings so we can mop up the sauce with the crepes from the “Cadet banchan.” 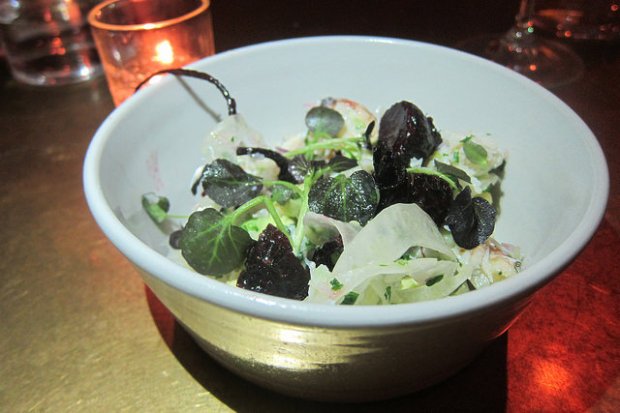 The smoked beets and Dungeness crab salad was really a work of art. With bits of avocado, fennel, crab and beets, this was a great winter salad. 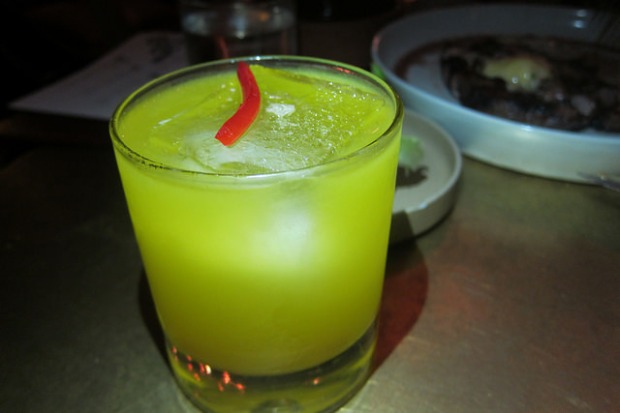 Sometimes you wonder which drinks on the menu will be the most popular. So far I think the French Margarita is winning. It is the enabler to your beautiful night. 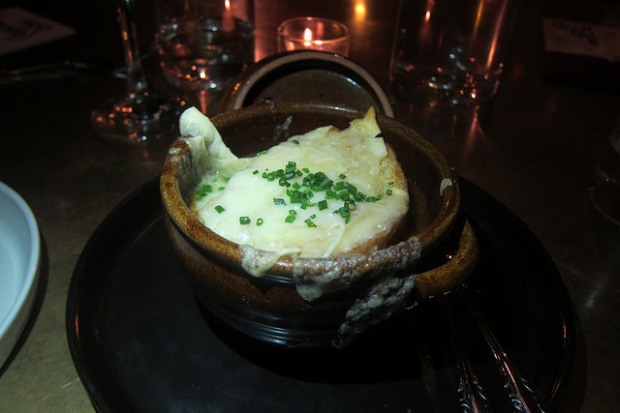 I can’t pass up French onion soup whenever I see it. Cadet’s personal sized soup had an amazing amount of soft, caramelized onion which is of course what makes this soup so seductive.

The simply grilled octopus, shrimp and monkfish was really good with the marjoram vinaigrette. This portion would make a good appetizer for a group of two or three people.

We got some side dishes and veggies though it almost seemed unnecessary with the addition of the Cadet banchan dishes. Still, don’t miss the cheesy farro. I really liked the goat cheese in this dish. 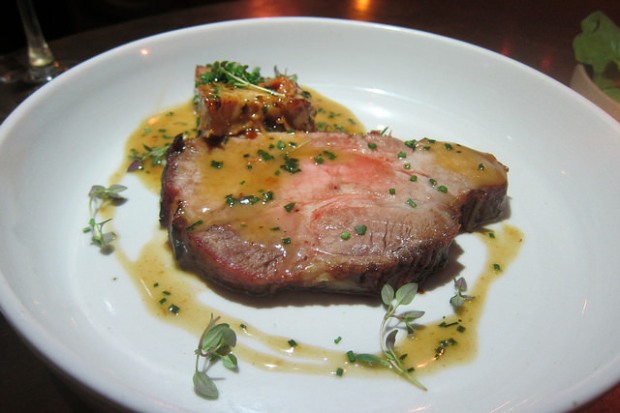 I’m always attracted to pork dishes. This pork collar (also known as pork toro) and milk-braised loin was a study of textures. The toro was a little bit drier but I learned that the wood grill was actually down this evening so I’ll just have to come back to try this dish as it should be prepared. 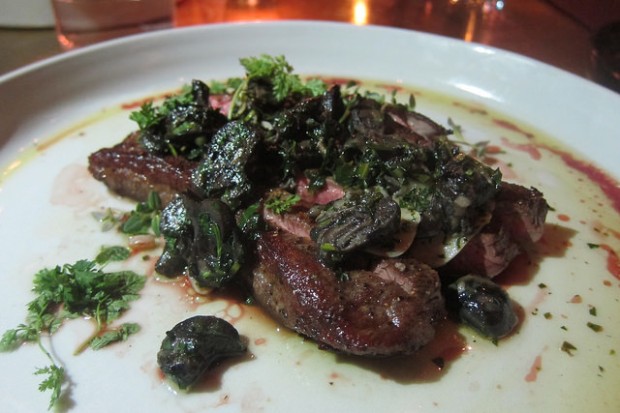 There are a couple of steak options. The first time I tried the bavette steak with escargot. This was easily my favorite that night. I love escargot and it was just a well-prepared steak. I bet it would be even better when grilled over the wood oven. 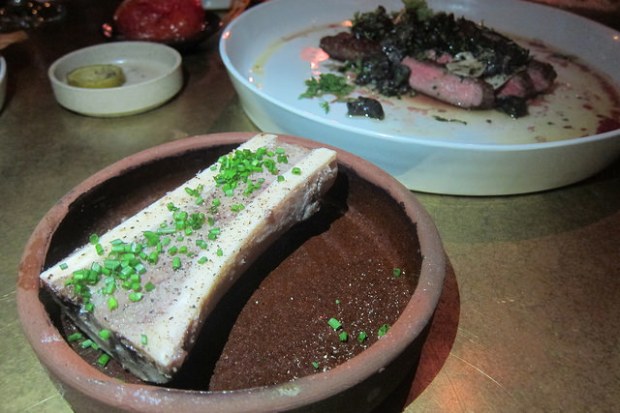 Of course we added bone marrow to our order. We later had fun doing bone luges. I recommend armagnac at Cadet for luging.

While the French Margarita is a crowd pleaser, the Cadet Margarita is for the cocktail nerds. I thought it was very bold to mix sherry with orgeat but the more I thought about it, I could see how the slight tartness goes well with the other ingredients including the pineapple and mole.

The Cadet Martini is an excellent cocktail that reminded me of a Martinez (though of course a Martinez is made with gin). There was something about the spice from the rye that worked so well with the sweeter maraschino and amaro. 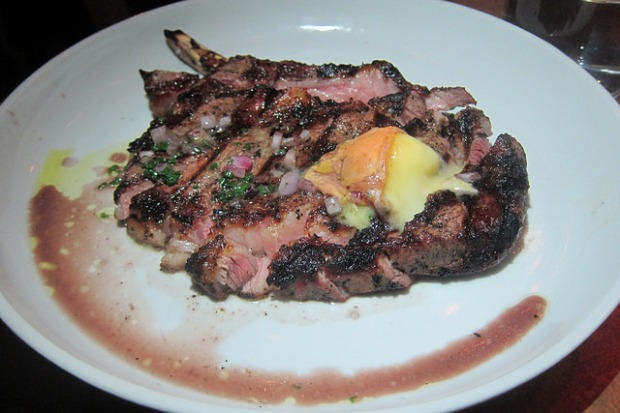 So we already know Cadet has awesome steak. And that was when their wood grill was down. What happens when it’s up and running and then you get it with cheese? We found out with the wood grilled ribeye with epoisses. I already love that gooey cheese and ribeye is my favorite cut… so yes, it’s amazing. The amount of oohs is directly related to how delicious this steak was. 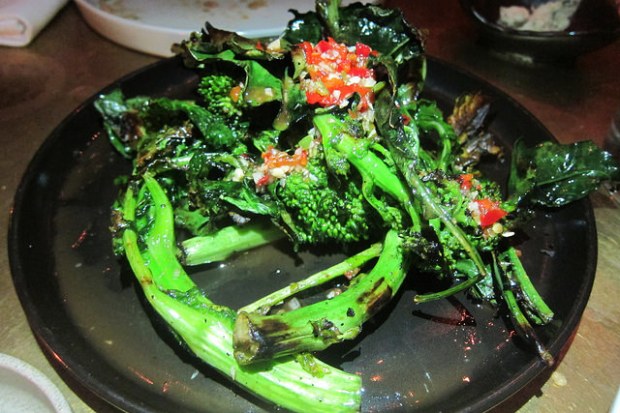 We also tried the wood grilled rapini. I generally like bitter flavors but my table mates were unprepared for it. It was also spicy from the chili vinaigrette. It was oddly more Latin in profile and I felt it didn’t go quite as well as I hoped with the steak.

To end on a sweet note, we went for the apple pie. We were so stuffed we couldn’t finish it but we’ll always have the memories of great drinks, steak and good company.

2 thoughts on “Santa Monica: Dinner and Cocktails at Cadet”