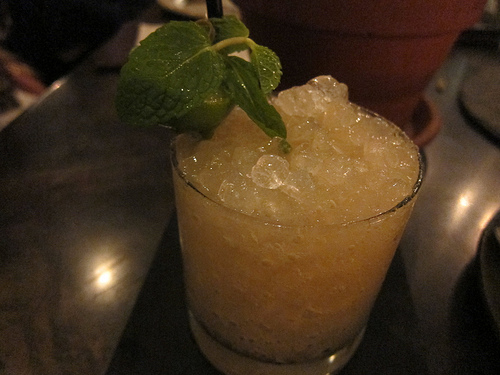 It’s been a while since I’ve been back to ink. After cake decorating at Duff’s Cakemix, we hit up the bar at ink. I had always meant to come back but it seemed like a new restaurant was opening every week and I just had to get to that one. I’m glad we checked out the bar though. I had heard you could order food at the bar which is increasingly my favorite place to dine.

New bar manager Gabriella Mlynarczyk helped us out. She comes from a culinary background so her drinks were very interesting. For instance, the White Rum drink LAist recently featured is very adventurous. Not many can pull off a banana cocktail. First Gabby muddles the banana with brown butter and leaves it overnight. Then she strains it and it’s used in the White Rum cocktail with lime and curacao. It’s deceptively light but packs a boozy, faintly buttery finish. It’s definitely better than artificial banana liqueurs at your local grocery store.

What I fell in love with this meal were the biscuits and cured meats ink. sent out to us. The biscuits were rectangular and very hot to the touch. I made a little sandwich and would have been happy with just that but I wanted to try some other things.

I actually started with the Rye-Applejack cocktail with maple, lemon, pumpkin ale and nutmeg. I may not be much of a beer drinker (just give me a porter or stout) but I love all sorts of beers in cocktails. This was a great Fall cocktail for our cool(er) Cali nights.

I know Brussels sprouts seem like an outdated veggie but I still love them. Next to kale, it’s probably the most ordered veggie I get. These Brussels sprouts at ink. were covered with lardo and apple and topped with a tangle of fried crunchy pig’s ear. You really can’t go wrong with combining pork with vegetables. The whole thing was really more about the pig than the sprouts.

Oddly, I thought the oysters would come out first as well, I thought they would be your average, run-of-the-mill raw oysters. But not quite. At ink., these were topped with a special migonette ice and presented in a terracotta flower pot. Heeeyyyy, fancy. And delicious.

And cocktails but that’s a given.