While there were many blog posts eagerly anticipating, touting the opening night and subsequent nights and even my own on the cocktails, I couldn’t help but feel I needed to wait a bit before writing about my first two nights at ink. I thought about even waiting until after I go a few more times but Michael Voltaggio has changed the menu going from a la carte to a tasting menu (starting around $70 a person with optional wine pairings) this month. It was understood his restaurant in a former sushi restaurant would server omakase (Chef’s choice) in the corner bar area. By now serving a tasting menu in the main dining room, it’s almost as if the whole restaurant has gone omakase. After all, isn’t a tasting menu the chef’s choice?

With this news, I’d like to reminisce about the dishes from September. Perhaps they’ll make another appearance (if seasonal, of course). 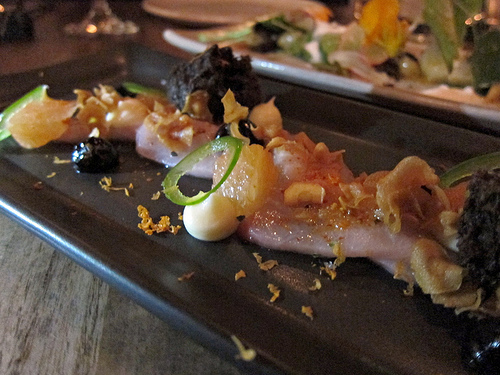 What I love about LudoBites is to see the evolution of the dishes from week to week. At ink, Chef Michael seemed to have changed the dishes overnight, or at least by the next week. At opening night, the hamachi with green apple, aged soy and ginger ice was good. But I liked it more the second time where I could fully see the fish. The preparation was slightly different– still raw but different garnishes. In the second week, the hamachi had parsnip cream, jalepeno, grapefruit and sesame.

The turnips and radishes dish by week two had also evolved. I had felt there was too much frozen yogurt the first week so I liked this more “open” plating more. 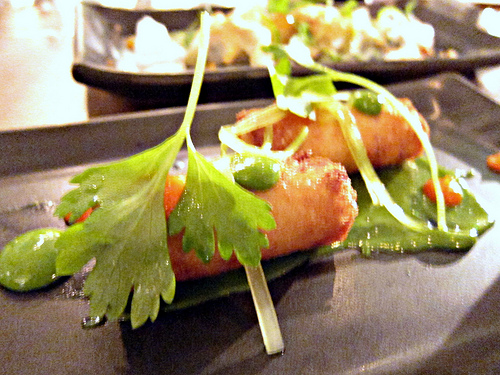 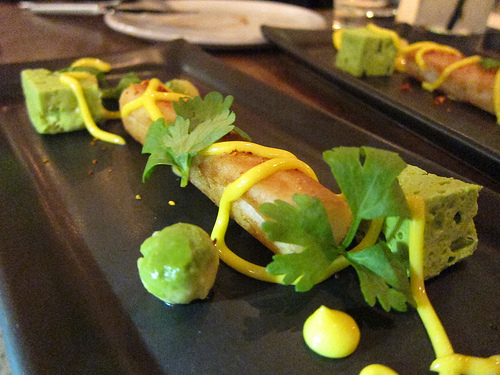 I really dug the dungeness crab on opening night. When our server mentioned it was best to order two the following week, I agreed because there were four of us and I wanted my own roll. Unfortunately, I didn’t care for the plating on the second week. There was now only 1 per order! Eek! So, we ordered 2 orders and got…2 rolls instead of the hoped for 4. 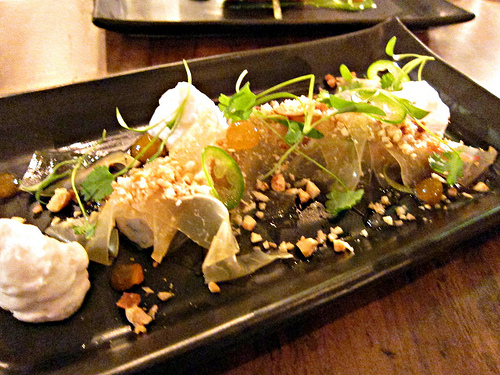 I liked the blue prawns with green papaya, finger lime, shrimp cracker opening night more than second week. Although the prawn was now visible, I liked the first run of the dish more. By the following week, it had bok choy kimchi and pumpkin preserves. 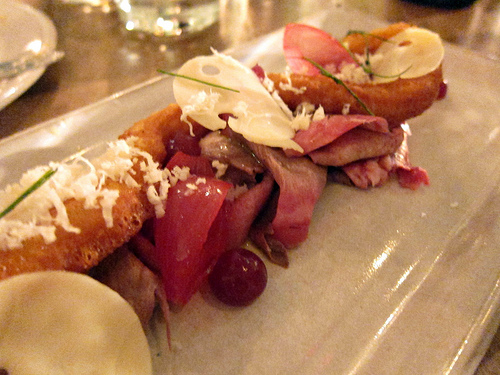 By the second week, the corned beef disappeared and beef tartare replaced it. 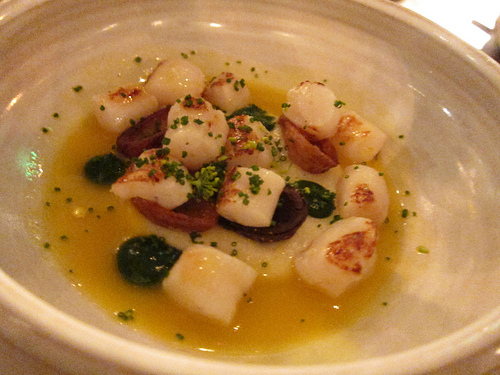 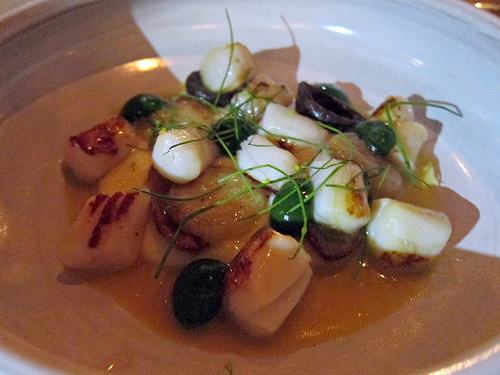 Scallops were amazing and I’m glad the dish stayed the same a week later. Loved the cream of dehydrated potato, potato skins and buttermilk–shellfish broth. Plating for the next few dishes didn’t change much. They were fan favorites. 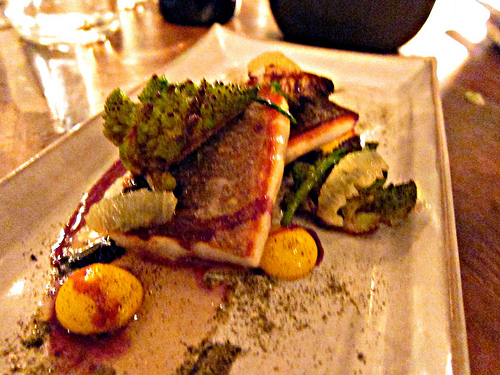 The sea bass also remained the same a week later. Everyone loved the tiny egg yolks and romanesco. The capers and black olive oil went well with the fish.

The seaweed mashed potatoes that everyone loved the first night were too salty for me. I actually didn’t want to order them again a week later but I was with people who hadn’t been yet and since we were ordering the entire menu, we went for it. Our server even wanted us to order two of this dish! As it turned out, it was much better this time around and I, who loves seaweed, even began to really like it.

Another awesome dish was the octopus with butered popcorn and piquillo pepper. The pepper reminded me of a fruit leather with holes punched out of it (but not sweet). 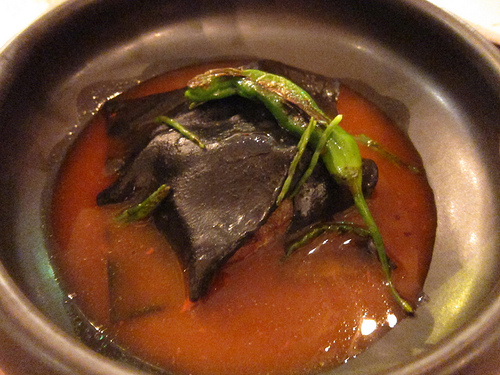 Although my photos improved the second week (I had an understanding friend who held up his cell phone for additional light), it’s somewhat hard to tell what this is. The large flat black piece is kelp pasta covering black cod the first week. A week later, it was halibut but same preparation. Like other dishes, I enjoyed the broth in particular. 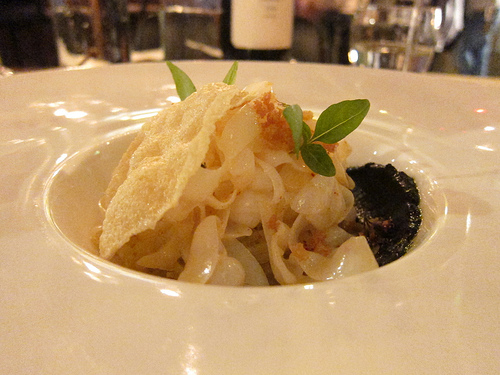 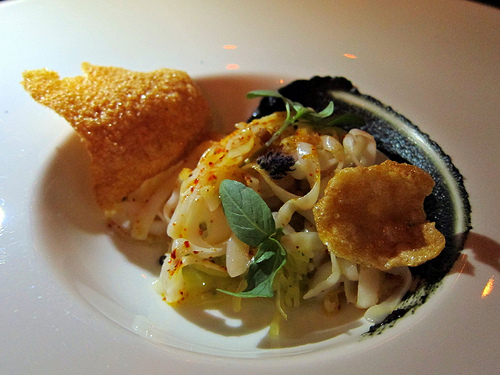 I couldn’t decide what my favorite dish was up until this point. Then I knew. The giant squid was cut into “spaghetti” and there was also spaghetti squash. There was also a hazelnut-ink pesto and pimet d’espilette to give it a punch of spice. 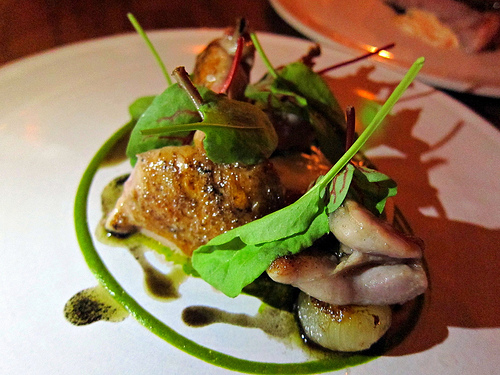 Why is pork just the perfect meat? So juicy, so good.

The first week, it was prepared with chanterelle mushrooms, mushroom chicharron, hazelnut “beans” and the second week, it came with burnt orange and saffron-salsify.

I grew up eating congee and I love mushrooms. I also like duck. I was so excited by this rice porridge with duck tongues and egg. However, it was slimey. I couldn’t take it. I felt bad about it since I heard from someone in the kitchen a week before how hard it was to take out the bone in the duck tongues. I’m sorry! It just wasn’t for me. And it didn’t make it to the menu the second week so I suppose it wasn’t for a lot of people.

We had a couple more meaty dishes to go. On opening night, the veal cheek red curry came with coconut rice and by the second week, it was listed with fried sticky rice. I think it was the same preparation though with the nante carrots baked in salt. 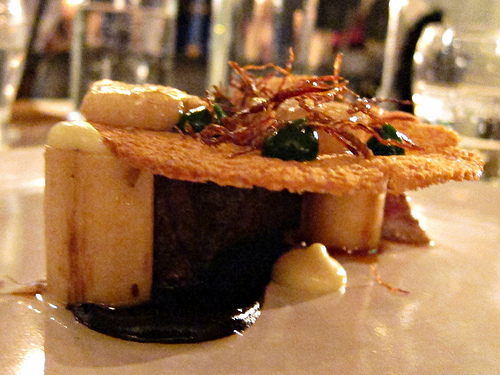 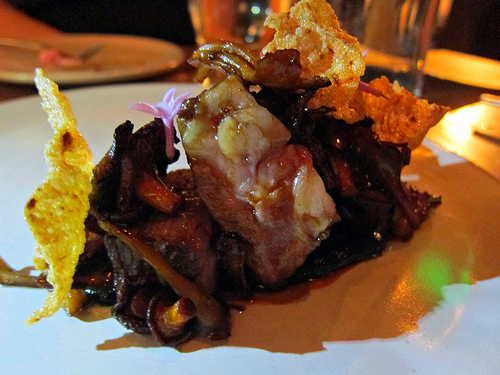 By this point, I was damn near bursting– both nights. I love short ribs and had a nibble each time. The first night, it was accompanied by hearts of palm, smoked marrow toast, gremolata and ras el hanout (a Moroccan spice). A week later, the short ribs came with the mushroom chicharron from the Iberian pork the previous week. It also had sweet and sour mushrooms and black garlic. 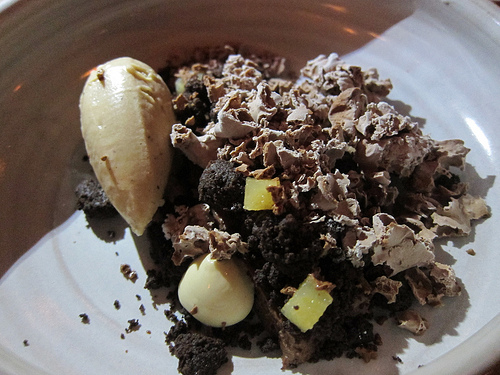 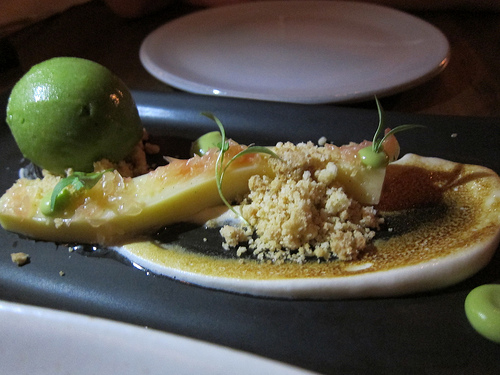 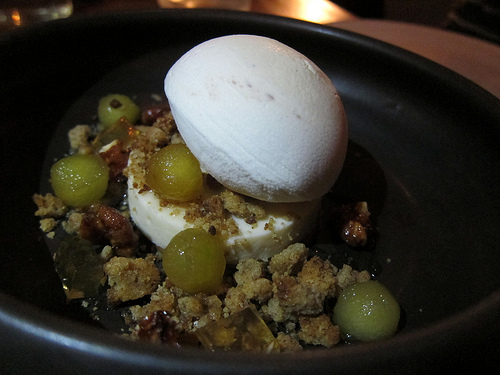 We were too full to try the desserts on opening night but my party was determined to get everything the following week. My favorites were the apple and chocolate desserts. I liked the goat cheese as well but thought the grapefruit was too tart.

I’m looking forward to seeing the new tasting menus at ink. I hope they kept the apple dessert!

– edit 1/6/11- plans for the omakase bar are “on hold” at the moment. A menu similar to the tasting menu will be available at the bar though the entire tasting menu is also available.

And don’t forget the sandwiches at ink.sack.