Originally I was going to be gone the week Big Gay Ice Cream came to LA for their ice cream pop-up. Fortunately (sadly?) I ended up being in town this week. On Tuesday, I went to the first stop of the BGIC tour in front of Duff’s CakeMix. It was about 10 minutes to 2 PM when they would begin serving. There was already a small line of about 7 people including Ink and Ink.Sack chefs Michael Voltagggio and Cole Dickenson. Since I hadn’t eaten lunch, I ran over to Ink.Sack and scarfed a Beef Tongue Reuben and half a Cold Fried Chicken (don’t worry people, they’re small and I left room for ice cream!).

I met Bryan and Doug from BGIC who told us about renting a truck and having it wrapped for the LA tour. Don’t worry New Yorkers, you still have your truck and shop!

For the West Coast version, the soft serve was made with Straus dairy from Straus Family Creamery.

We couldn’t decide what to get but eventually I narrowed it down to the Salty Pimp and my friend got the Mermaid. Later I found out the popsicle maker had missed her flight so they were going to have popsicles at another stop. 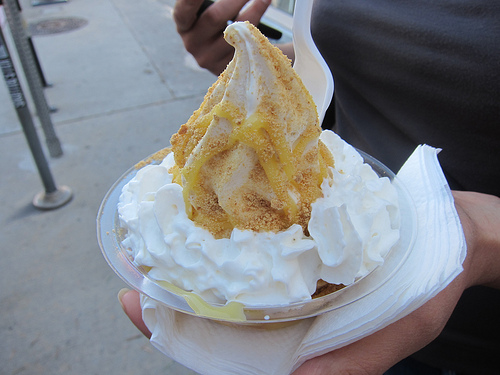 The Mermaid sundae was vanilla ice cream, key lime curd, crushed graham crackers and whipped cream. There was a savoriness I was trying to determine. Later we were told maybe it was the lime curd. I could see that. It was actually very interesting since salty + sweet is all the rage (hello, sea salt and caramel started it all).

Speaking of that, I got the Salty Pimp cone. The vanilla, dulce de leche and sea salt cone was made even better by dipping it into chocolate. Ah, decadence. The soft-serve ice cream of my childhood can’t even touch this. Once I demolished the scoop with a spoon, I picked up the cone to eat. Yay, there was even more ice cream at the bottom of the cone. Winner!

There are only a couple more days to catch Big Gay Ice Cream. Check out their website for the schedule.