DTLA: Checking Out (Almost) All the Drinks and Tacos at B.S. Taqueria

B.S. Taqueria is now open in the old Mo-Chica space in Downtown Los Angeles. The taqueria opened by Chef Ray Garcia, formerly of Fig in Santa Monica, gives us a hint of what’s coming to his next restaurant, Broken Spanish which will be opening in the next couple of months in DTLA.

This casual spot is great for lunch and it also just launched dinner. I stopped in for lunch one day with a friend and we also tasted almost all the drinks. Fantastic bartender Julian Cox and his team created the drinks list. Now word comes Michael Lay (formerly Faith & Flower) has been named Beverage Director of Broken Spanish and B.S. Taqueria.

The first drink I tried was the Borracho Gazpacho. It’s great for lunch and I imagine brunch. The very food-friendly drink is practically a salad in a glass.

Chef Ray is probably best known for his lengua from his Fig days. It’s then no surprise the lengua tacos are a must have. Two come per order. We were invited to try out the salsas but these tacos came with such a flavorful sauce, it’s not necessary.

Nick Meyer works with Julian Cox and Josh Goldman on the various Bill Chait-backed projects including BS Taqueria. He spoke excitedly of Broken Spanish as well. Considering how great the drinks are, I can’t wait. I thought I had gotten the Cox-Goldman-Meyer program down (heavier on the whiskey) but it was like a breath of fresh air to discover the Latin spirits on this menu. This also comes from working with Chef Ray. 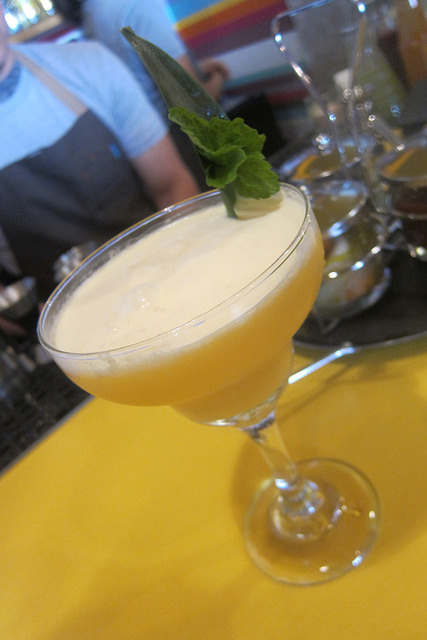 I grew up in LA and drinking orange bang is one of my favorite childhood memories. Getting it was always a treat. Having a grown up version inspired by the iconic drink brings back a lot of those memories. At B.S. Taqueria, you can indulge in Orange Bang with mezcal and fresh ingredients like tangerine plus their house made coconut cream.

One of the fun appetizers to much on is the lemon pepper chicken chicharrones. The chicken skin and chunks of chicken (chicken oysters) are deep fried along with peppers. I really liked the lemon pepper which reminds me of a Baja style preparation of peppers.

Next we had the Hoja Santa which features the hoja santa leaf as both a garnish and in the drink itself. The drink had a lightly vegetal quality went well with the tacos. It helped cut through some of the grease of the chicken chicharrones. 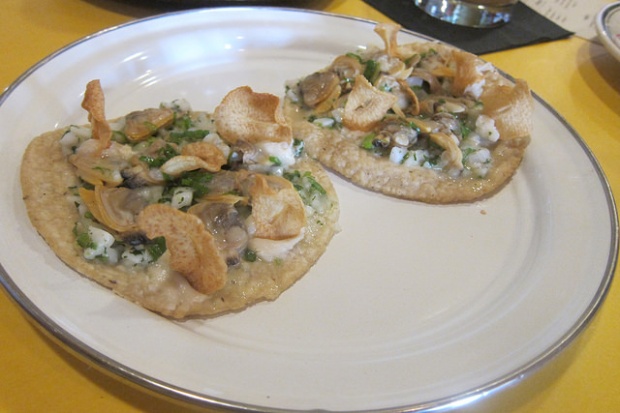 One of the most interesting combinations for tacos is the clams and lardo. It’s perfect for our sunny and warm days. The garlic chips aren’t overwhelming and everything was perfectly balanced between sweet clam meat, creamy lardo and the slight crunch from the garlic chips.

Although the De La Rosa doesn’t include the iconic Mexican candy, it does taste just like it. The marigold flower garnish is edible but I didn’t try it, preferring to just sip on the slightly sweet drink. I’d recommend this towards the end of the meal. 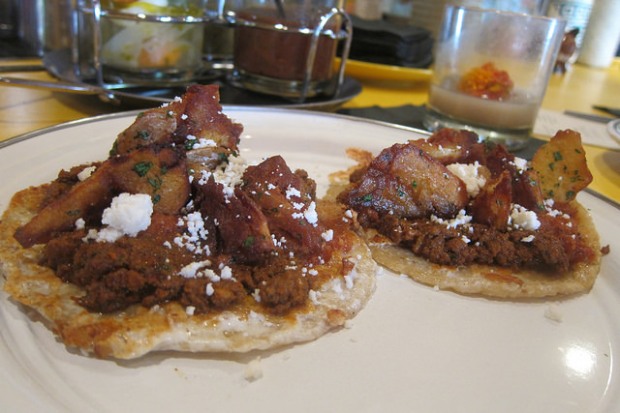 But just as we thought we were done, we had to try another set of tacos. One of the best sellers is the chorizo sausage and potatoes. Really well-spiced chorizo makes these tacos.

How much tamarind can you get into a drink? First start with a tamarind-infused vodka then add in a tamarind shrub, tamarind soda and top it off with a straw coated in tamarind candy. I really enjoyed the tartness of the drink and it changed to a pretty rosy pink with the tamarind melting off the straw. Add in a little sherry to make it a modern cocktail. 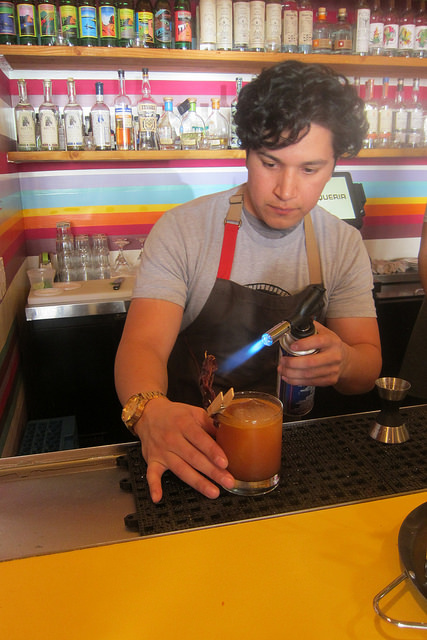 flaming the garnish for Mole Rojo

One last drink time! One of the hot garnishes in the cocktail garnish warns is a clothespin. I usually see mini ones but I have to hand it to B.S. Taqueria for using a genuine clothespin. It clips on a chile pepper to the glass that’s been smoked a la minute. 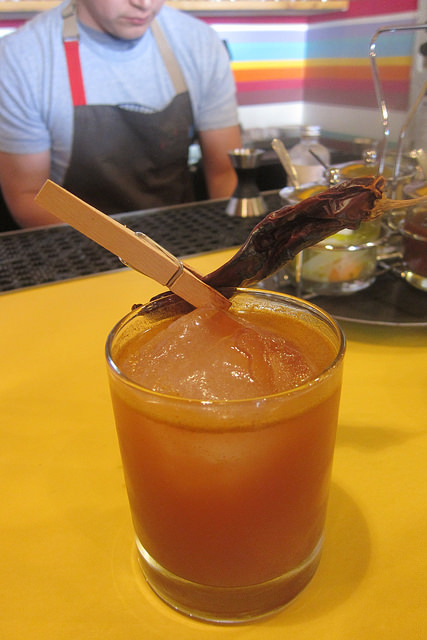 The mole used is from East LA. All the cocktails are very fun but stay true to the Latin flavor profile. The Mole Rojo uses both tequila and Ancho Reyes chile liqueur which brings a spicy element.

I really can’t wait for Broken Spanish to open. But I probably see myself more at B.S. Taqueria for tacos more frequently. I’d like to try the duritos, masa (not a typo) ball soup, campechana verde and the desserts next time.

← Las Vegas: Steak and Seafood at Mon Ami Gabi
2015 William Grant and Sons May Mix-Off Returns to the Mixing Room at the JW Marriott, LA Live →

3 thoughts on “DTLA: Checking Out (Almost) All the Drinks and Tacos at B.S. Taqueria”