I recently checked out drinks at FOH in Downtown Los Angeles. The Mexican restaurant also serves craft cocktails and damn fine ones at that. I ordered the Never Say Rye since I love whiskey and Campari but I kept stealing sips from my friend’s Little Death. It turns out Little Death is one of the most ordered drinks on the menu. It’s an aromatic and lovely drink with gin and cognac rounded out with lavender bitters. It’s refreshing and may be DTLA’s number one summer drink. 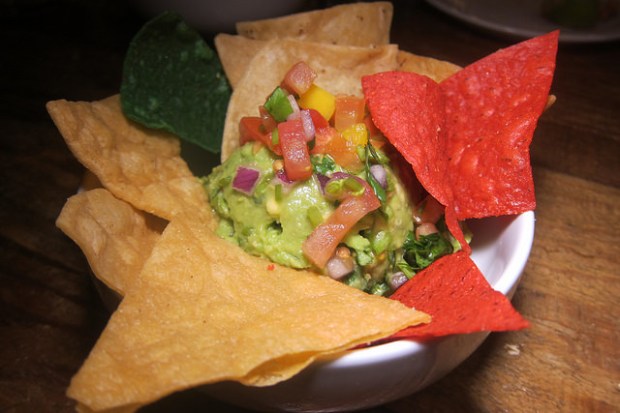 I didn’t have a full meal at FOH but would like to return for lunch. The fried chicken sounds great. Though this is a modern Mexican restaurant so perhaps the steak burrito.. with kale salad! Or duck nachos. Actually, maybe that’s why Mexican isn’t part of the restaurant’s name as there’s a huge variety of stuff. Everything from popcorn shrimp to steak frites to jalepeno cornbread.

I did try their chips and guacamole and it’s pretty terrific. It’s great with the shrimp and fish tacos.

I tried both the shrimp and fish tacos and the fish won out. The batter is light and there’s quite a bit of fish. I also enjoyed it on sliced jicama instead of a tortilla.

I’ll be back for the drinks!

← A Summer of Night Markets in Orange County and the SGV
Silver Lake: Get Thai Food and Wine at Same Same →