It’s been a few years since I’ve been to Texas and I hadn’t been to Dallas before. I love being out of Los Angeles during Independence Day and feel particularly patriotic when I’m in the Midwest or South. When we decided to go to Dallas for the Fourth, we made a very long list of spots to check out. Although we didn’t really make a definitive plan unless it involved barbecue. So I was very open to check out Small Brewpub which my buddy at a local Dallas bar said was the most innovative restaurant Dallas had right now.

We started with cocktails while I thought about beer with our meal. My friend had the Corpse Reviver which was one of the specials on the board. I had Nemesis (rye whiskey, sweet vermouth and hops). It sounded really interesting with hops. While I don’t generally like IPAs and hoppy beers, I like hops when it’s elsewhere like Anchor’s Hophead vodka. 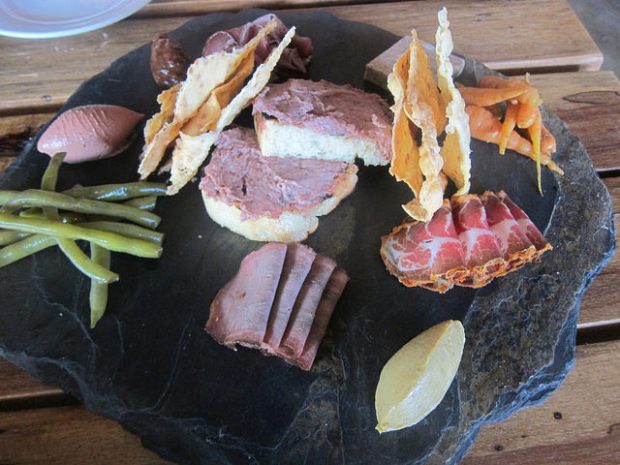 My buddy had said we shouldn’t miss the house cured charcuterie. We told our server to send us out a selection. While I liked the cured meats, I was really intrigued by the various mousses and pates. I also liked the pickled green beans. But I’m a nut for pickles and pickled vegetables.

My favorite dish was the sweet tea braised pig tail. It had great texture and was utterly luscious. The table next to ours also had this dish and it was fun watching grown men moan out their pleasure for this dish.

I love Bolognese pasta and was excited to try the rabbit and pork liver one from Small Brewpub. We were eating relatively lightly so we decided to share everything. It worked out for the appetizer and the cured meat but when it came down to the pasta, I was starting to think we needed another dish. It’s perfect for one person but not quite enough for two people who had been traveling all day.

I liked the perfectly al dente pasta and the nasturtium leaves. I was even convinced to try a slice or two of the Danver carrots though I’m still not a carrots fan. I just didn’t like the hard bits of dried herbs which ended up scratching my throat. I didn’t see a purpose of the bits.

We were never asked if we wanted another round of drinks so perhaps I’ll have to try the beer if I ever make it back to Dallas one day.

This area seems to be gentrifying and Small Brewpub is leading the way. It was the only business doing really well on an otherwise empty street even on a Saturday night. Sure, it was a holiday weekend but as our uber driver put it, she didn’t expect anyone to be out on this stretch of the road.