Last year I did a speedy trip through Philadelphia. Whenever I check out a new city, I have to have all their favorite foods. And the last time I was in Philly, I was only going through the airport and cheese cost extra on a cheesesteak. I’m still mad at the Philly airport to this day.

In any case, we were taking a stroll along South Street and stumbled upon Ishkabibble’s. There are two locations within blocks from one another. One is the tiny stand and is older. The other is a newly opened restaurant with ample seating. It seems the locals prefer the original stand so we hit that one up.

I kept it simple and ordered my cheesesteak with whiz and onions. Later I thought I could have added mushrooms and peppers but the simple combo of meat and cheese went down like a treat. My friend and I shared three sandwiches that day and I still don’t know how I did it. I hadn’t done a food crawl in a while and I have to say we survived just fine.

The next time I’m in Philly I might have to devote a whole day to just eating cheesesteaks because then I’ll want to figure who has the best in town. 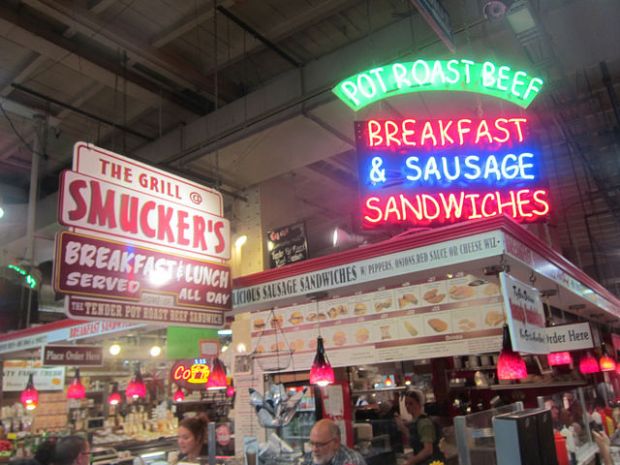 Whenever I told someone I was going to Philly, they said I had to check out the Reading Terminal market. It’s like LA’s Grand Central Market, they said. As it turns out, it is indeed like my beloved GCM. However, Reading Terminal may even be just a little bit better (don’t tell anyone I said that).

It still has a lot of old school vendors selling sides of meat, fresh baked goods and other items for your own home cooking needs. And then there was a plethora of cooked food options. 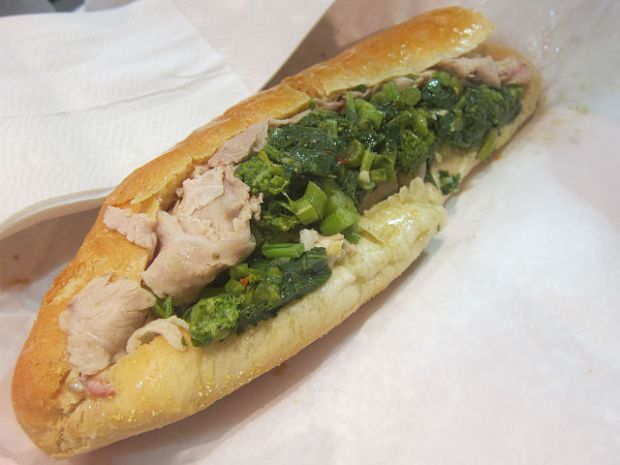 Our mission was to get the roast pork sandwich at Tommy DiNic’s which is regarded as one of the better roast pork sandwich options in Philly. Roast pork as I discovered is a very Philly thing. Yes, they have roast beef too but most go for the pork. And you have to get it with broccoli rabe. Some do find it a bit bitter so they opt for spinach instead. We did as the locals do and go it with broccoli rabe.

The sandwich which is on good bread is loaded with sliced roast pork. It’s a good sandwich though I thought it needed something.. to be continued.

The turkey cranberry is definitely a favorite at the market year long, not just during Thanksgiving.

I wish we had more stomach room to do other sandwiches or other food at the market but it was time to run up the steps of the Philadelphia Art Museum like Rocky.

← Philly: Slurpin’ Noodles at Pho Nhan
Philly: All the Good Stuff at Vernick →