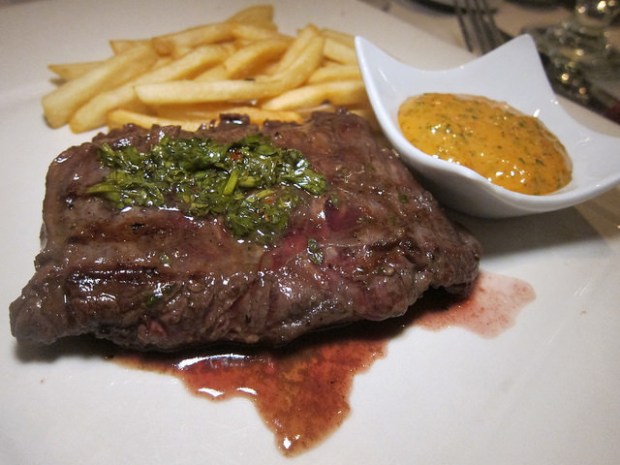 I can’t believe it’s taken me this long to try Carlitos Gardel Argentine Steakhouse. It’s been open 20+ years and any restaurant that’s withstood the fickle LA restaurant scene deserves respect. The restaurant is named after the famous Argentinian Carlos Gardel, a singer-songwriter who is best associated with tango.

While I was at the restaurant, I learned how Argentina is multi-ethnic. There are a lot of Italians and Gardel was born in France (there is though some dispute about this claim). In any case, the food reflects many cultures.

Recently Gardel’s chimichurri was launched. The olive oil based sauce with many herbs including parsley, is enjoyed with Argentinian food. It’s bright and can used on anything from meats to bread. I really enjoyed the Gardel’s chimichurri lemon aioli which went great with grilled shrimp and fried calamari. With the beautiful steak (shown above), we had the chimichurri habanero aioli. The spicy kick went well with the juicy skirt steak.

We also tried the chimichurri with balsamic. It added to the already flavorful mushroom sauce we had with the rack of lamb.

In LA, the sauces are available at Gelson’s and Whole Foods among other fine grocery stores. It’s a great option to have on hand if you can’t get to the restaurant!