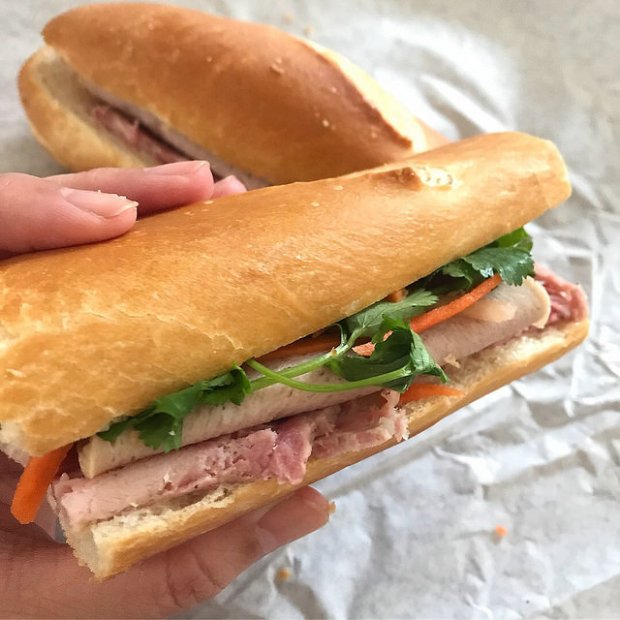 I’ve been tempted to stop into all the various Banh Mi Che Cali locations I’ve seen through the years. Somehow though I haven’t had a “cheap” banh mi in years. The kind where they’re sold as buy two and get one free. Recently as I drove by zillions of places I could have gotten take-out, I settled on Banh Mi Che Cali.

I was sharing lunch with my family and so you might want to have BMC cut up the sandwiches for you or have a knife handy. If you take these sandwiches out, they will give you a baggie of pickled veggies (carrots and daikon) along with sliced jalepeno and cilantro. This first sandwich had meatloaf, ham and pate. It was great and my favorite. 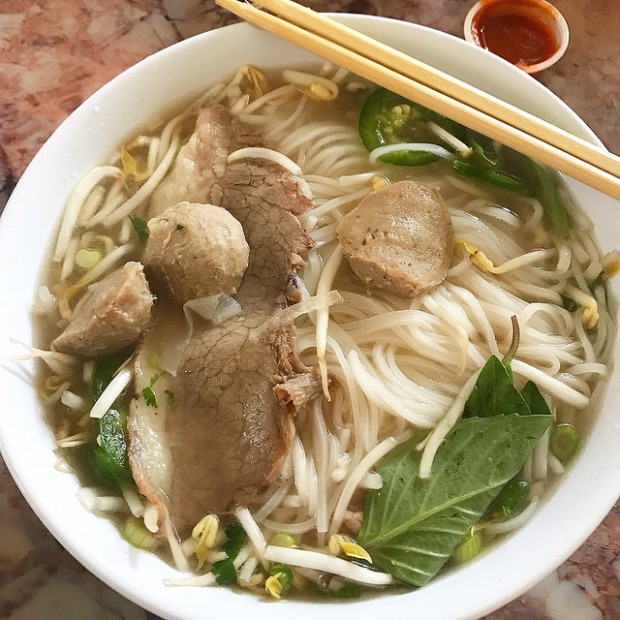 Since I also ordered the noodles to go, everything was individually packed. I loved that even the raw beef of the pho dac biet combo was in its own baggie. I do have to say the soup did taste a bit filmy… like it hadn’t been skimmed often enough. Still, the soup was piping hot and the veggies were very fresh. My favorite meats were the tripe and the meatloaf. The cooked brisket and rare brisket were fine.

When you order by number as I did, it would be helpful to specify the numbers coordinate with either sandwiches or noodles. I apparently confused them by ordering both the #1 sandwich and #1 pho.

The #7 sandwich is the nem nuong aka the BBQ pork meatloaf. I usually get this pork in spring rolls so it was interesting to have it in a sandwich.

I’ll tell you a secret, I love pate and headcheese. For my freebie banh mi, I chose the simple meatloaf and headcheese. Adding in plenty of cilantro and pickled veggies, I ate less than 1/4 of this before tapping out. What I loved about all the sandwiches were the subtle use of soy (though I suspect it’s more like Maggi or the equivalent) spiked mayo.

I’ll stick to getting sandwiches from now on from this El Monte location. Though there’s a part of me that wants to try all the interesting packaged food to go including the spring rolls. They also had drinks and  Chinese food steam table plus egg rolls to go as well. No, okay, I’ll stick to sandwiches!