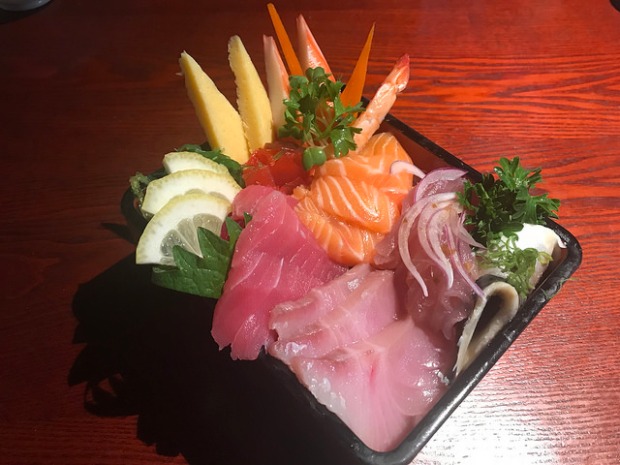 Longtime readers of The Minty might wonder what’s my favorite cuisine. While it’s not Japanese, I do eat a lot of Japanese food. I love going to Little Tokyo and eating at a new spot. Despite only being a few streets, there are a ton of restaurants jammed along First and Second, bordered by Alameda and San Pedro streets. Recently I wandered upstairs of what I thought was an abandoned building. I had not been in this particular building in Little Tokyo since I was in junior high. The ground level had shops for anime and manga lovers. If you want to look like a harajuku girl, this was the spot to be. Upstairs, there was a cyber cafe (for real, they still have internet cafes!) and ZenCu.

The large restaurant featured both sushi and Japanese grill items. It has a sports bar feel. After looking over the menu, I opted to try their chirashi.

The fish quality was okay. I was bummed out by the rice which didn’t seem like sushi rice (not enough vinegar) so I mainly ate the raw fish. I felt it was quite a generous portion.

My friend had a combo and she opted for teriyaki salmon, tempura and a spicy tuna roll. She seemed to like her lunch but we both agreed we rather go elsewhere for chirashi. I’m glad I tried ZenCu though because I discovered where to take friends who want to buy comic books.