By sheer luck, I found the Lobster Bar as it was next door to the Conrad where I was checking out the Asia Contemporary Art Fair. It was a Friday night around 8 p.m. so it was very busy at the bar. They allowed me to stand while waiting for a spot to open up. I discovered Hong Kong bars all provided snacks (while the American imports did not).

I quite enjoyed the snacks and my drink and was almost done when a spot opened up at the bar. There were guest bartenders that evening from London and I didn’t want to get sucked into a long night at this bar as it was only my first stop. So I headed out with some regrets. I bet this bar has lots of stories to tell.

While I was on the Kowloon side in Tsim Sha Tsui, I took the opportunity to check out the Artesian bar at the Langham Hotel. I felt welcomed at the bar and enjoyed a quiet drink listening to a singer and piano player covering 1990s songs. I was completely full but had some of the olives and nuts. I was beginning to dig this bar snacks trend. The olives were excellent.

Artesian at the Langham Hotel 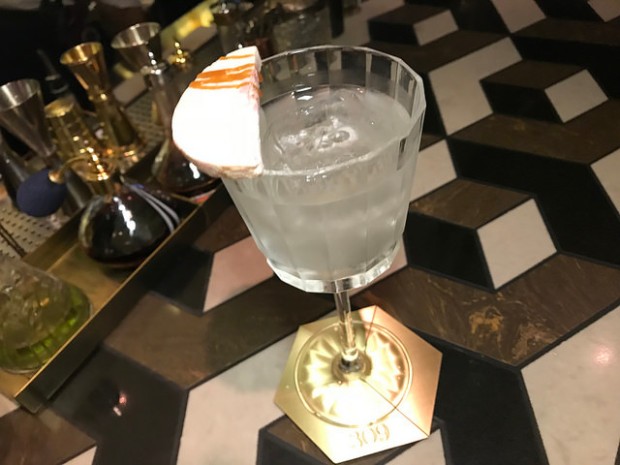 Room 309 at the Pottiger Hotel

The last hotel bar I checked out was Room 309 at The Pottinger. To access this speakeasy, check in with the Envoy bar and get a room key.

Room 309 opened about two months ago. The current menu features “invisible” drinks or clarified cocktails. It’s printed on clear plastic with white ink. Hold it over the cover of the menu so you can read it.

I opted for the “Where’s my whisky sour,” which is one of their invisible drinks. The bartender explained to me the invisible drinks are re-distilled. I sampled the peanut one meant for Crystal Old Fashioned. It was really nice and if you like peanut butter, you’ll love it. The reason why I love bourbon is the nuttiness and this enhanced it so much.

I probably should have stopped in for a drink at the Envoy but I had a few more bars to get to in Hong Kong and had to move on.

Room 309 at the Pottinger Hotel