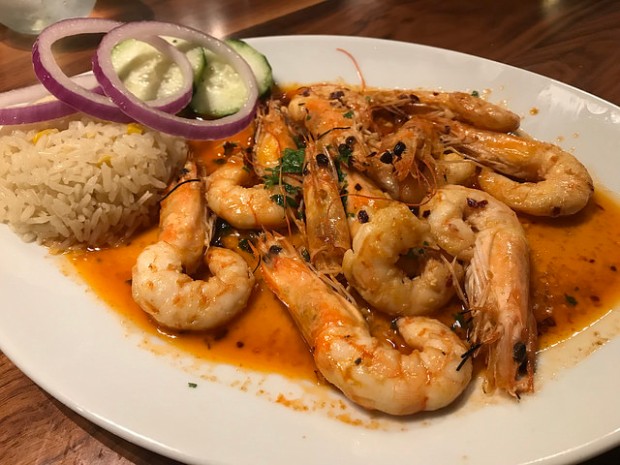 Maybe one day I’ll keep a better list of restaurants to try by location. Whenever I meet up with friends in certain parts of town, I generally have to comb my admittedly pretty good memory for spots I wanted to go to. I decided Culver City was halfway between my friend and I and that lead to a google search or two plus a squinting at a map.

I came up with Coni’Seafood. I had always wanted to go. I was familiar with their food from food festivals but until I arrived, I hadn’t realized this was the old location of Mariscos Chente. And it turned out Coni was Chente’s daughter. Aha!

Coni specalizes in Nayarit Mexican food which focuses on seafood. We had a shrimp-filled night.

If you like spicy food, definitely try the salsa which had a heat that crept up on you. At first I was fooled because of all the citrus but that brightness went so well with the jalepenos.

I wanted a ceviche and the marinero was recommended to us. It came with a black sauce and I liked the mango. This was a shrimp ceviche. I might try a different ceviche next time or attempt the spicy trap that’s the aguachile.

For our mains, we ordered a mixed seafood soup and the shrimp borrachos shown above. The soup was nice and warming on a cold night. I liked how mellow and rich the tomato broth was.

The borrachos was also amazing with the liberal use of butter. We got a side of rice to make sure we got all the sauce. It was a little different from when I had it from Chente but I have to say I like Coni’s version better.