Over Memorial Day weekend, I headed up to Santa Barbara and it was a non-stop adventure. Here’s one for your playbook- get over to Shaker Mill for tropical drinks but the bonus is the Cuban food.

Cubaneo operates out of a window inside Shaker Mill. They are separate businesses so you will have to order from both but it’s worth it to get great drinks with good food.

I loved that some of the drinks are named after Cuban food items. However, it does get confusing if you’re ordering from both the restaurant and bar. Did you get the medianoche sandwich or the drink?

In our case, sometimes it was both.

I can’t go to a tropical bar without ordering either a pina colada or a mai tai. The pina colada won out this time. And I’m so glad I tried it. It was a delicious interpretation with amaro.

The intriguingly named Arroz Con Pollo had pechuga in it which is one of my favorite mezcal expressions. Since it siad con pollo, I wonder if this particular pechuga had the essence of chicken? Or perhaps turkey which would be fairly traditional. 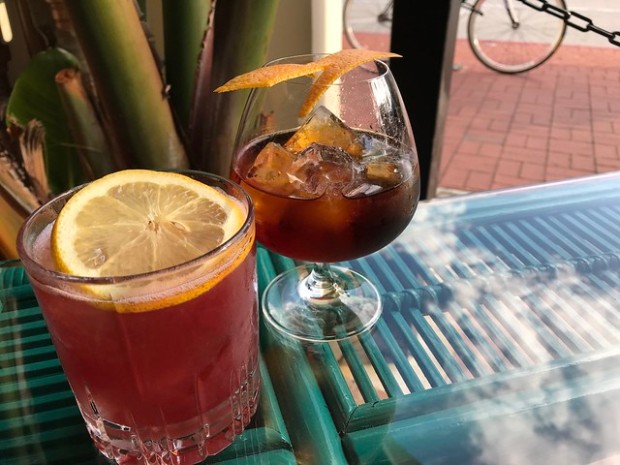 My friend had the Porto Guava which I liked well enough. I thought it was hilarious local citrus was named (or not really named). I had a boozy Medianoche (not the sandwich). It’s like a rum side car… without the local citrus.

Soon the food from Cubaneo was ready and I practiced my server skills by carrying wings, the plato mixto and tostones without the benefit of a server tray. I suggest making two trips next time because I felt like a magician pulling out napkins and utensils from my handy pockets. 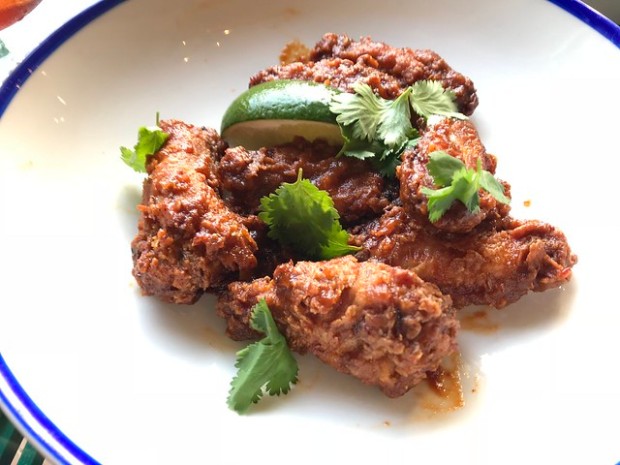 The wings were on special that day. They were good but perhaps a bit of work. If you don’t like gnawing on bones, why are you even ordering wings? Squeeze on the lime and go to town!

The plato mixto comes with beans, rice and avocado salad with your choice of protein. I got the mojo pork. I got to taste a little bit of everything though truth be told, I really just wanted the rice and beans. And plantains. And yucca fries. I’m a sides freak.

My friend requested a side of green sauce with her tostones. These were great– not greasy at all.

We had such a good time, we thought about going back for more drinks after dinner but it was already very crowded and we weren’t going to be lucky enough to score patio seating a second time.