While in Santa Barbara, I checked out Lab Social, the cocktail bar inside of Caje Coffee. I had found it searching for new bars and it was so brand new, my Santa Barbara buddy hadn’t even heard of it. We got tips on how to find it — the entrance is through a side door and follow the voices of people in conversation. I don’t suggest randomly pushing doors around the address as I did.

Once inside, you’re greeted by friendly bar keeps.

I looked over the menu. It was definitely a craft bar but unlike some spots, the drinks actually do taste good.

I was intrigued by the Mai “Thai” which has “Thai Market-infused rum”- I assumed this mean herbs but I did find out the limited availability for the drink was if they had the coconut orgeat which is housemade. It’s delicious. I am a huge Mai Tai fan so I really enjoyed this version.

My friend had the Sazarac which they call the OG Sazzy. Originally this drink used only brandy (particularly Cognac) and eventually Americans started using rye whiskey instead. I liked it with both as some bars like to split the difference. The only thing missing was the absinthe but it was so boozy that it really didn’t need it. 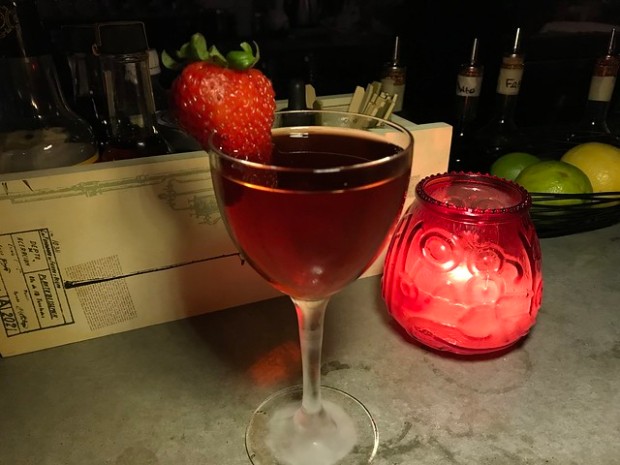 Then I had this wonderful Negroni variation. The Solstice Negroni uses a strawberry-rhubarb sweet vermouth as a strawberry infused Campari. And if you aren’t in a gin mood, you can sub in mezcal or rye whiskey for $2 more. I also asked for this to be served up in a Nick and Nora glass — it says N&N glass on the menu. What I liked about this was despite all that strawberry, it was really just the flavor. It wasn’t a juicy drink at all. Truly a stirred cocktail.

If I had more time, I would have also tried the Hemingway in Sandals or the Churchill Sour. I’d also like to see what the place looks like as a coffee shop. It seems they do non alcoholic coffee drinks with the same care and creativity. There’s also food so perhaps coffee then happy hour!