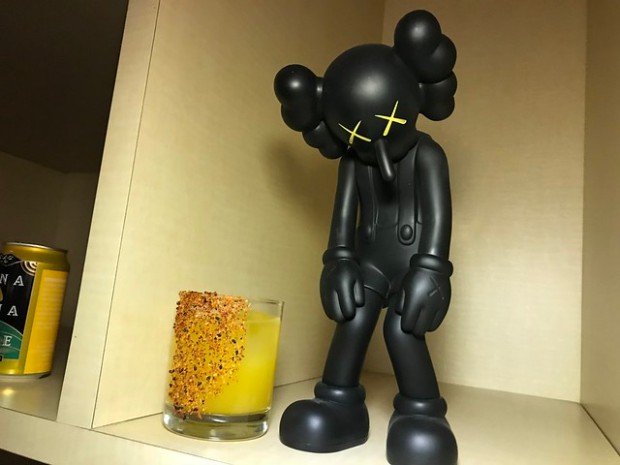 I recently stopped by Hatch Yakitori to try their new Japanese inspired drinks. I was born and raised in LA and this shopping center was known as Broadway Plaza back in the day when Broadway department store was the anchor store. They were later bought by Macy’s. It remained a staple until they tore out the roof and it is now an outdoor shopping center. It’s much nicer now and I love all the new stores and restaurants going in.

Hatch is tucked away in the corner and it’s very easy to get to via the Metro.

I previously have been to Hatch before but they didn’t have cocktails then. With this new launch, I tried pretty much the all the drinks including the mango tequila drink. I love the Kaws figurine, by the way. Street art meets fun.

I was also at Hatch recently for the most recently dineLA restaurant week. The lunch dineLA special was great and my dining buddy enjoyed it so much, she went back a few days later.

Since Hatch is a Japanese skewers spot, the drinks uses Japanese spirits and flavor profiles but with a modern approach. I like that there’s a drink with tequila but then you can also get a whiskey sour with Japanese whisky. Yuzu gives it a nice citrus punch. Fortunately the wasabi in the Wassaup Bae wasn’t overwhelming. Still, if you don’t like wasabi on sushi, you’re not going to like it in a cocktail. Good thing you can always repeat drinks. About that whiskey sour…

Probably The Minty is best known for brown, bitter, stirred drinks and so my pick for Hatch is the Tokyo Drift. It’s essentially an Old Fashioned.

What’s better than spicy tuna on crispy rice? Add in avocado and serve it on a large wedge of crispy rice. Awww, yeah!

A pretty drink is the Rum Tum Tum. This is for all the rum fans in the house.

Japanese cuisine is one of my favorites and I love all the styles from sushi to homecooking to robata. So skewers (robata) is just a great way to bring out flavors naturally without a lot of fuss. When you have good quality meat and veggies, grilling is the perfect way to showcase the food. 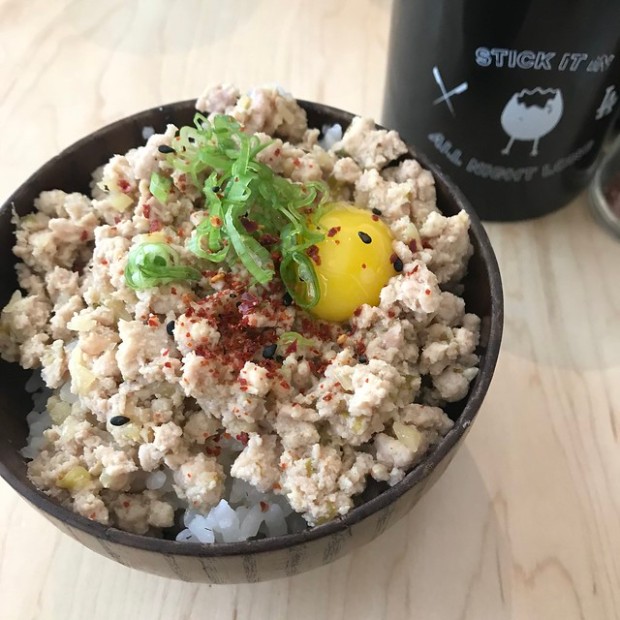 Our dineLA lunch ended with with soboro rice. Soboro is ground chicken. This is a filling meal and well worth the $20 deal.

I ended on a sweet note with For Goodness sake wich mixes a fool-proof combo of sake, vodka and lychee. It reminded me of a certain time of my youth (ha!) where lychee martinis were all the rage. I would suggest though going with a nice lychee liqueur and not the “juice.” It was a tad too sweet for me.