I’m not always an early adopter but eventually, I get around to trying everything at least once.

One day, I was asked if I had tried LudoBites yet. I hadn’t heard about the first pop-up and the second one was going on at Breadbar at the time. I actually didn’t think much of it. I have a long list of restaurants I want to try and why would I want to add another?

The answer given by Gastronomnom was it was one of his favorites of the year, right up there with Animal. Considering my meal at Animal was among one of my favorites this year, I knew I had to try it.

It was in one word, amazing. I tasted 15 things that night that completely changed my world. Cantaloupe and chorizo soup with cornichon granita was well, again, amazing. And the night only got better. Highlights from that night included the bacon tart, lobster medallions, duck breast with carrot cake coulis and this crazy cupcake; foie gras chocolate with candied bacon nuts.

Naturally, I knew when LudoBites version 3.0 came along, I needed to make reservations and make them fast. Reservations for the 13-day pop-up at Royal/T sold out in hours. I was lucky enough to secure a reservation towards the tail-end of the run but even luckier to go with a gang of foodies last night. I think it’ll be wonderful to compare the first week to the last.

We ordered everything on the menu X2 for a table of 8. Well, except for the foie gras beignet. We ordered four of those. The bill eventually worked out to be $75 a person which included two bottles of wine.

Those peanuts were a great snack. I envisioned myself at an Asian cinema cheerfully stuffing myself with them instead of the standard fake-buttery popcorn.

Then the scallops with brown butter and pineapple as well as the bread soup hit the table. 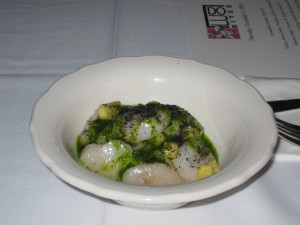 I was pleased to see at least 8 scallops in the bowl. We were initially worried about portion size but this dish was well worth the $12. A friend who had gone the night before wasn’t entirely happy with this dish, tasting more brown better than anything. But for me, I could not detect it and all I had was 2 luscious bites of scallop. The black squid ink powder was more decorative than anything as well. I did enjoy the cute diced pineapple in it.

Do you ever have one of those days where only a big bowl of warm soup would do? Forget grilled cheese and tomato, this is the ultimate comfort soup! Breaking open that poached egg to let the yolk seep into the bread soup was like drinking an egg sandwich with a fantastic rich cheese. Who would have thought that gruyere marshmallows could be so addicting?

Next to hit our table was the pork belly confit. It smelled amazing. With a table of shutterbugs, I was getting lightheaded from breathing in the beautiful pork while waiting for everyone to take their pictures. Since I was sharing with three others and there were 3 pieces, we debated how we were going to split it. Once I cut into a piece, I knew it was every (wo)man for themselves. I snagged a couple of bites and was well pleased. 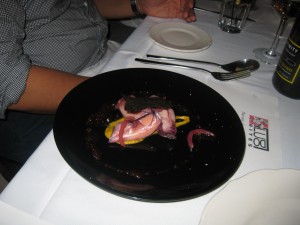 For the last few days, food bloggers have been raving about this dish. I was eager to try the Monterey squid with chorizo oil and kimchi puree. Well, I wasn’t in love. It could have been the fact I normally love sour things but I just didn’t like the punch. I ate two pieces seeking the natural squid flavor I love but it tasted bland. I apparently missed swiping it through the chorizo oil though because I didn’t get any of it. The hard to see piece of nori on top was more decorative than anything. Still, I love the concept. It didn’t feel like typical nori though, more like a soft pliable seaweed leather.

Veal Udon, Kombu dashi, mushrooms and sesame miso. The night was frenetic. Dishes were arriving quickly, flashes were going off and conversation was to be had. Plus wine to drink. I never considered myself a food blogger. I’m a writer who enjoys food. If you get me going on the subject, I can go on for a while but it usually boils down to one or two statements. Either, “it’s yummy” or “hm, could be better” or “my god, what is this mess?”

Fortunately, this udon was “it’s yummy.” It wasn’t one of my favorites though. I have to admit that even though I love noodles, I have never really liked udon. And was happy to actually share a bowl with three guys with strong appetites who destroyed that bowl in mere minutes. I loved the dashi and with a little miso, it made an impact.

I also have a love/hate relationship with veal. I want to love it as a foodie but the times I’ve had it, I wonder why people like it more than say a great aged steak. Still, I can see how this was a great dish that fitted the J-pop surroundings we were in. 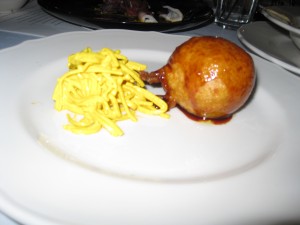 Unlike the bloggers around me, I have a simple point and shoot digital camera. For the most part, it serves me well. I wasn’t too happy with my first shot of the foie gras beignet and took another shot. I’m glad I did as this second shot shows the beignet a bit better. Unfortunately for me, others weren’t too happy with their shots and by the time I got to dig into this, my beignet was nearly cold. Wah wah! I bet this would have been amazing hot.

Still, it was really good and I wished I had a whole one to myself. Yes, every rich bite of it. The celery roots remoulade was like a really fancy cole slaw that puzzled me. How did the richness of the remoulade not compete with the richness of the beignet? I have no time for puzzles so I ate it. Every last bite.

I love seafood. And yet, I never imagined my favorite dish of the night would be the wild striped bass with garden vegetables in a yuzu aoili. Look at those eensie tiny teeny brussel sprouts! Love. The flavor of the fish was superb. This is just a well done dish.

I’ve been following Chef Ludo’s adventures on twitter along with his wife, Krissy’s commentary. Their adventures spanned this menu. I remembered when he went to Animal and it reminded me of the pork belly I had. I remembered when he had beignets and the miracle of the foie gras beignet came from that escapade. But one of my favorite tweets was when he learned to make mole. He was so enthusiastic learning the art of mole from a LA blogger’s mother.

From France to East LA to Royal/T, the Far East (or would that be West since this is Culver City?) birthed what was sure to be another L.A. foodie cult following; the LudoBites mole.

The marinated hanger steak was great on its own but with the inventive black olive mole, it was out of this country, out of Europe and clearly had no Asiatic roots except for the bok choy in the dish. I nabbed what I thought to be a mushroom. Oh, I should have consulted my now oil and sauce stained menu. I ate escargot and loved every minute of it. I also thought the baby corn in its husk was great.But that mole, man. East Love. La Raza!

We’re winding down here. I didn’t want the meal to end but out came the Furme d’Ambert Tourte. We were lucky because Krissy said they had sold out. Nyah Nyah!

Chef Ludo gave us the simple recipe but me follow a recipe? Me bake? Nah, I rather come back to LudoBites. The cheese tart went perfectly with the red wine we chose. I wonder if a cheese tart and wine for breakfast would be the breakfast of champions?

I don’t know what I did but my picture of the chocolate “cake” does it no justice. I’m sorry for that crappy picture but trust me, it tasted great. I didn’t make it to LA Mag’s Food Event but later someone mentioned it was very similar to the chocolate mousse Chef Ludo made there. There was a definite kick to it that Chef Ludo said came from jalepeno.The soothing flavors of the coconut and rum banana smoothed this dessert out.

The pistachio rice milk with lemon pound cake was good but no foie gras cupcake. As some would say, I wouldn’t kick this dessert out of bed though. It’s still sweet!

I can’t wait to come back in a few weeks!