Last week, I went veg. Well, only for a night. My mother became a (not-very-strict) vegetarian a few years ago and she wanted to try this fancy pants Chinese veggie place. At least we thought it was fancy pants as the few times we’ve gone, it’s always packed. Granted, those were holidays and any restaurant in the SGV tends to be madness.

Luckily on a random Tuesday, it turned out to be a  non-busy night and we were seated quickly in the nearly empty dining room. We must have been helped by everyone in the restaurant at some point.

Anyone who has been struck with horror over shark’s fin soup can now relax and enjoy this shark-free veggie version. The fin was replaced with clear noodles. The taste? Well, I was missing the chicken stock but otherwise, it was fine.

Despite the PF Chang’s implications, I did grow up eating lettuce wraps and enjoyed the version with squab the best. This one was served pre-filled with fake meat that wasn’t even specified as fake squab but I’m going to say it is anyway, to justify its cost. 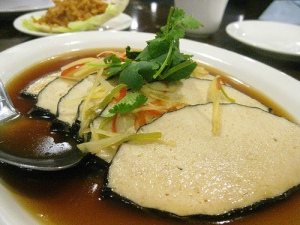 What’s this? Fish. The server really wanted us to order their spicy fish but my family are even wimpier spice wimps than me so we went with the steamed “fish.” It turned out to be slices of soy product shaped like…ovals. The black “skin” was molded seaweed, criss-crossed in an imitation of skin. Since I dislike any skin, especially gross slippery fish skin, this worked for me. 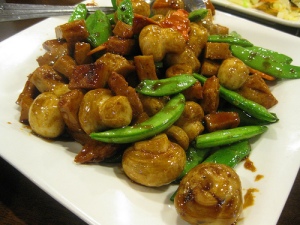 Of all the fake soy products labeled as some sort of “meat,” my fave tends to be “chicken.” Unfortunately, this dish didn’t have those soy nuggets but rather some soy product diced up. Erm, was this the same as the fish soy product???

In any case, it was fine. Just don’t call it “chicken.”

The best dish of the night turned out to be our carb fest, aka the rice noodles with pumpkin. The thinly sliced pumpkin gave the noodles an extra added ooomp and it was just a nice dish.

I actually would come back to this restaurant and take my veggie friends. My mother, the not-so-strict vegetarian, thought it was too weird and wished everything was just made with tofu. Aha! That was me back in the day but after dining with veg friends, I have a new appreciation for fake-o meats even if I would not actually become vegetarian or for some crazy reason, vegan.