Last week, we arrived earlier than our dinner reservation at XIV so I thought we could take advantage of their happy hour.  I remember enjoying Vixen’s post about it and wanted to check it out myself. The lounge was being converted to what seemed like a sports bar and we were told they weren’t offering happy hour anymore.

However, inside at the bar, they were still doing half off their cocktail list. I tasted three drinks but my favorite was the Vanilla Rhubarb Fashioned even if I didn’t taste much rhubarb in it. I could smell it though which was interesting. I did really enjoy the Cucumber Pom Deluxe and this cocktail packs a punch.

The four of us were in to try the 6-course $40 tasting XIV was doing. After picking out a bottle of pinot noir and nibbling on some bread, our courses came fast and furiously.

I was a little disappointed how unimaginative our first two courses were. Tuna tartare and caesar salad? Sure, both were good but isn’t this a Michael Mina restaurant?

The first time I went to XIV, I fell in love with the Tai Snapper. It was my favorite dish with the flavorful fish and crispy rice cake. I savored every bit of this fish. 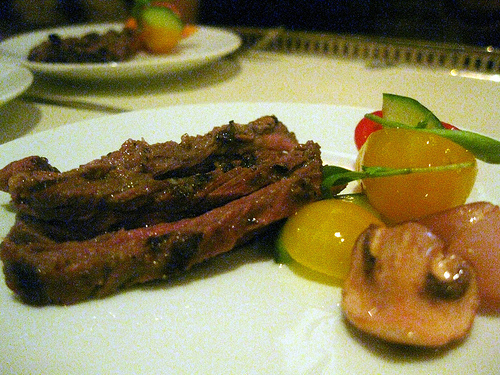 Others enjoyed the next few dishes. I did agree the chicken was very juicy and the steak was well-done but again, I was missing the inventiveness. 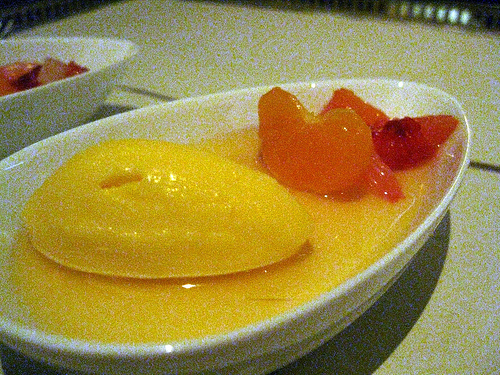 Our sixth and final course was the panna cotta. A friend exclaimed how much she liked it. I thought the citrus was a good complement to the creamy panna cotta.

Overall, it was a good meal but nothing like the first time I went. It was a bargain and the service was friendly. But all of us still felt hungry afterward. I think if we had let our brains catch up to our stomachs, we would have felt fuller but being that we were eating as rapidly as the food came, we left hungry.

4 thoughts on “XIV is King”