From the Mouths of Wolves

I first ran across Craig Thornton of  Wolvesmouth when I read his post sometime in February about reflective cooking. I remember thinking how beautiful the post was. Not a typical food blog. Craig is an artist which is something I identify with as an artist myself. He thought of cooking as more an art form than a craft and he certainly takes his cooking to that level of artistry.

Several months passed since I read that post and though I’ve always been into food, it hasn’t really been this year that I began to get to know people in the food scene. And I don’t mean the writers.

At the end of the meal, Craig said he was going to get pho because he had been cooking and thinking the entire time. It was exhausting. And sometimes you just want to eat something good without thinking about it.

From the moment I had his first dish, the scallop, I was already transported. Who knew he was going to hide a bit of broccoli puree in the kumquat? The corn soup was also very good. The grated katsuoboshi lent a depth of briny flavor that was unexpected but welcome. From that first dish, I was thinking about his food.

A friend of mine recently told me how attractive it was to know someone is thinking about you. There’s something powerful about that. This is something artists crave- that attention. And there’s nothing wrong with that because it is well-deserved.

So who is Craig? I gathered he worked at Bouchon and the private chef of Nicholas Cage but why did he start doing these dinners? Wait, let’s back up even further. About a month or so ago, I noticed a couple of friends checking out Wolvesden, a new supper club. Then I started seeing pictures. And I read a couple of posts. DJ Jewelz and Food Marathon gave me some idea of who this wandering artist-chef was.

From the Wolf himself-

“wolvesmouth was started with the concept of exciting people through food and creativity. there is no need for fancy linens expensive paintings or priceless flatware to shake things up. this is stripped down. gritty. refined.” 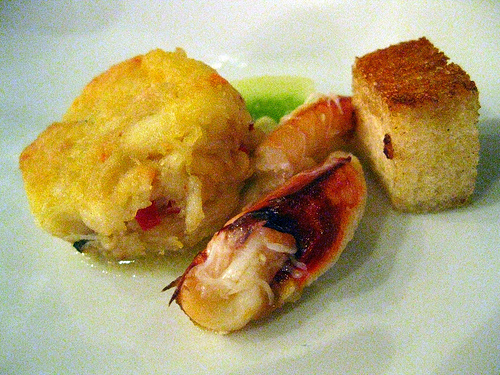 Stripped down? Gritty? But yet refined? Well, I’m not sure about gritty because this is pretty high-end dining. But perhaps gritty because it is in a “den.” In this case, it was the main Wolf den but it is subject to change for future suppers. You are warned there are no servers and to BYOB. I brought cider, iced tea and two bottles of wine thinking that would be good for a dinner party of 8. Others were equally generous and we did not nearly drink enough.

Do you ever wish sometimes a crab cake had more crab? I think my wish was granted. Not only was the crab cake perfect but I got to enjoy more crab. I needed it to swirl around that lovely bone marrow tartar sauce.

Craig is from Arizona but he explained his grandmother is from the South. Some Southerners swear by pimento cheese and it is supposedly delicious. It looked nothing like that horrific stuff you find at groceries here. Proper pimento cheese needs to be made by Southerners or at least Southerners at heart. This stuff was yummy! And the heirloom tomatoes were perfect. Craig said he picked the tomatoes himself, looking for uniformity. It was just something kind of crazy about that. Yes, I imagined many chefs do that (hence the popularity of farmers market driven menus) but I never get to talk to these chefs about it. This guy picked these tomatoes and hours later, sliced them for us. Yeah, maybe you’re not blown away by that but I was. Shopping, prep and cooking. All done by Craig. He has some help but it’s all him generally. 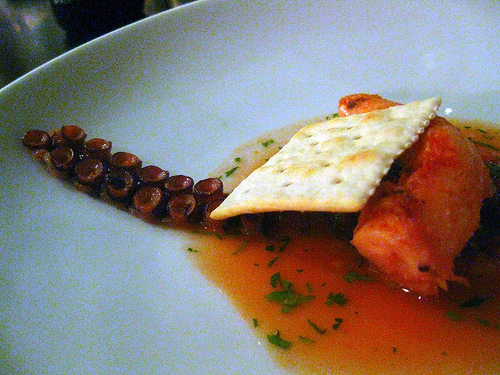 First taste- the sea. When I was in college, there was a little divey Mexican place everyone went to get trashed on fruity margaritas. It was probably the closest I got to the sea creatures people ate at beach side shacks in Mexico. I would order a big ass bowl of seafood (still my favorite thing in the world) and go to town. Sometimes, I’d come up with a oddly shaped chunk with a fin still attached. This dish reminds me of those flavors. And as far as I can tell, I wasn’t at the beach. The saltines helped maintain that idea; sun, sand, sea, food, drinks. 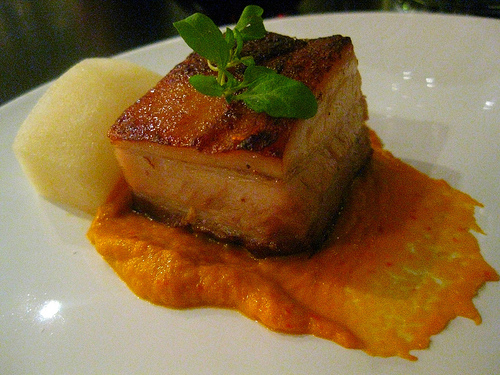 The woman next to me heard me murmur- comfort food. Pork belly is all the rage these days but I grew up eating pork belly and to me it is comfort food. Yet, this presentation of it- with the kimchi puree, a chunk of Asian pear and the pennyroyal was simply different, creative, wonderful.

You are encouraged to move around during dinner. We had 13 courses this evening so I felt it was time to investigate the kitchen.

I took a video of Craig cooking the artic char.

Even though I knew this was artic char, it looked so much like salmon. The flavor though is very different. More mild and very tasty. I had to force myself not to finish my portion which was probably a tiny bit too big for a tasting but my food-lovin’ heart loved Craig for trying to feed us so well.

The potato puree was thick and some of the best mashed potatoes I’ve had in a while.

The meal just kept getting more interesting. Some people at the table said they never had squab before. Although I wouldn’t consider squab comfort food, I had it several times a month growing up and never can get tired of it. This presentation was crazy good. We were all intrigued by the chicory.

Pork belly AND pork cheek on the same menu? I didn’t tell them what I really wanted to see on the menu but while I claim seafood as my first love, pork is definitely a contender for a very close second place. 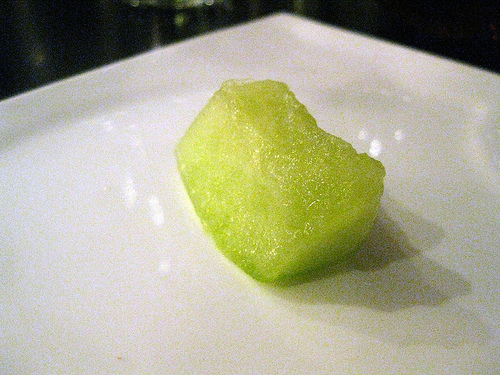 I also didn’t mention I was allergic to honeydew melon. When I saw this green melon chunk on my plate, I was prepared to break out in hives just for the taste. But as it was, it turned out to be anana melon. And no, I’m fine and lived to tell this tale.

I’m not a butcher so I can’t even begin to describe where exactly the saddle of an animal is but um, and don’t quote me, but maybe where an actual saddle would go if you ever wished to ride a lamb? Okay, probably not. Did you get a load of the gigantic piece of it before it was cut into slices for us?

Craig is apparently an ice cream master. From his other menus, I gathered he has turned cornbread and donuts into ice cream. And he did it with cupcakes for the “birthday girls” (myself and another guest) for this meal. First he baked the cupcakes, frosted them and worked some wolf magic to make ice cream. I was so focused on this ice cream but other things on my plate were wonderful as well. There’s something to be said for picking the perfect peach.

Hurrah, I’m glad to have met the artist-chef behind that blog post I read so long ago. I’ll be looking out for more of these suppers.

Have you read the rules? And want to join the fun? Then get on the mailing list.

6 thoughts on “From the Mouths of Wolves”