I may have mentioned a time or two I love noodles. Of all the carbs in the world, I would give them all up in favor of subsisting on noodles forever. 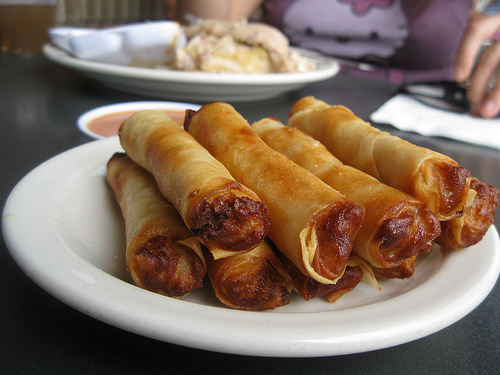 However, I am not forced to such a noodles-only existence and the Noodles Partner and I had a rice adventure this past Saturday. Growing up, my family ate out multiple times a week and grabbed meats from Chinese BBQ shops up to two times a week. Besides getting Peking duck, Chinese BBQ pork (and maybe sausage), my dad would ask me almost weekly, “soy or salty chicken?” I would always answer soy. I never liked the salty chicken. It was the weird rubbery yellow-y skin. Although now that I think about it, I never ate the skin anyway so it didn’t matter. Eaten with only an oily salty gingery dip** and rice, it was not very interesting to me. My dad would shake his head and say the salty chicken was fresh and the soy chicken was just the salty chickens they didn’t sell the day before and bathed in soy sauce. I’d stubbornly hold my ground though and maybe once a month, I’d get my slightly dried out soy chicken.

** I did however always enjoy the day after we got salty chicken and my mom would shred the leftover  chicken and make a fried rice with the chicken and that oily dip.

A few years ago, a friend took me to me Sanamluang Cafe in Thai Town. She ordered what I now know is the Thai version of Hainanese Chicken and Rice. At the time, I didn’t think much of it but felt the same aversion to it as I did to my childhood salty chicken. She mentioned it was comfort food to her and loved the sauce. 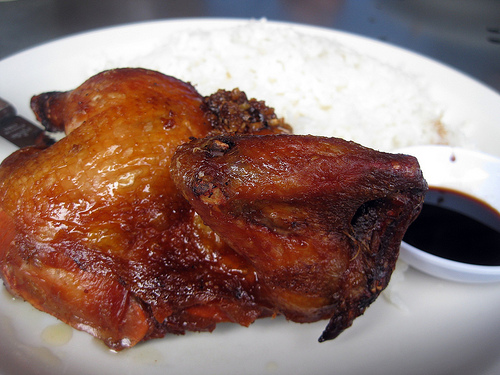 Ah, the sauce. Fast forward to a recent bout of couch vegging and a marathon of No Reservations with Anthony Bourdain. Unlike most foodies, I am not keen on him. But with nothing else on and Bourdain in Singapore, I watched an incredible episode that started with Hainanese Chicken and Rice.

Eh? What’s this? A plate of boiled up chicken, oily rice and dipping sauces? This seemed to be the national dish of Singapore and by golly, Bourdain ate it. And appeared to like it. Yes, the chicken is boiled in a combination of chicken and pork stocks. A separate chicken only broth is used to cook the rice. And the dipping sauce seemed to have the broth as well. Though after reading about a dozen recipes, I have found some have you cooking the chicken with just ginger and water and many variations of sauces including adding thick soy paste for Thai or fish sauce for Vietnamese versions.

I already knew about Savoy. The grand debate who has the better Hainanese Chicken and Rice had not escaped my non-rice loving heart. I knew J.Gold had written about a few such places, many I’ve been in and never even thought about a rice dish. It was time to go to Savoy. 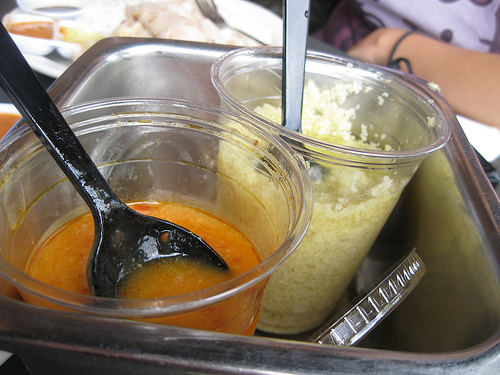 I initially proposed the idea of a FACE OFF with the Noodles Partner but she was uninterested. For you see, Savoy was her favorite and she thought it tasted just like how she had Hainanese Chicken and Rice in Singapore where she went to high school.

I told various people I was popping my Hainanese Chicken and Rice cherry but when it came time to order, I negotiated with my group and ordered the Cornish game hen. The Noodles Partner got the Haianese Chicken and Rice. And dining buddy, Right Way to Eat, got the duck pasta. We covered all our poultry bases.

The duck in the pasta tasted boiled to me. I wasn’t really into the sauce. But I was laughing delightedly over the bread served with it. It looked like a cross between focaccia and Chinese mantou buns. They were dry though. We also ordered shrimp rolls which were thin egg rolls. The dipping sauce it came with wasn’t as good as the dipping sauce for the Hainanese Chicken and Rice so I ended up using the chili sauce for it.

After carefully removing the golden skin of my Cornish game hen, I dipped it into the dark soy and ate it with the oily rice (apparently it was the same rice as the Hainanese Chicken and Rice). Which then gave me the idea of nabbing the sauce which I’ve determined is why people eat boiled chicken and rice to eat with my own Cornish game hen. Savoy gives you two cups of sauce to refill your dinky condiment dishes, removing the extra sauce when someone calls for more which invariably someone will.

As for the chicken, we ordered dark meat only. To be fair, the chicken didn’t taste boiled. It was actually quite good. I see the need for the sauce to keep it interesting. But my mind wandered. I wondered if I should have ordered a side salad? Maybe other veggies? This is getting really oily. And greasy. People are crowding around us. When we arrived, the tables were fairly empty. And now people wanted their Hainanese Chicken and Rice. Bless ’em because that means more noodles and dumplings for me down the street.