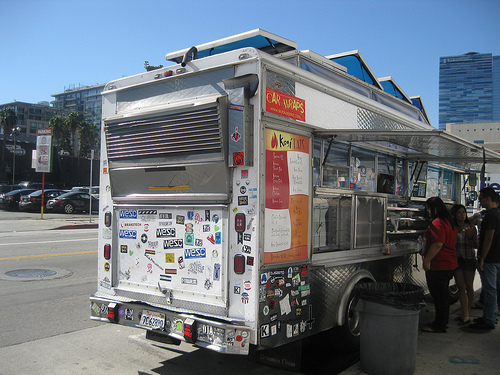 It might be pretty late in the game to be writing about the Kogi truck. By now, most food truck aficionados know the story of how founders Mark Manguera, Caroline Shin-Manguera and Chef Roy Choi started with one truck and used social media to gain popularity. Prior to Kogi, taco trucks were a staple in LA but mostly confined to construction sites and late night grubbing. Combining Mexican and Korean food was revolutionary. Sure, absolutely there were food trucks in other cities specializing in more than tacos but in LA, this was novel.

Fairly soon after, there were copy cat trucks and  trucks for Chinese-Mexican tacos, then pizza trucks, Middle Eastern, Indian, Vietnamese and just about anything you can think  of.

Now there are five Kogi trucks affectionately named  in Spanish; Azul, Verde, Naranja, Rosita and Roja as well as serving out of the Alibi Room bar. Chef Roy also owns Chego and the new A-Frame which just opened. 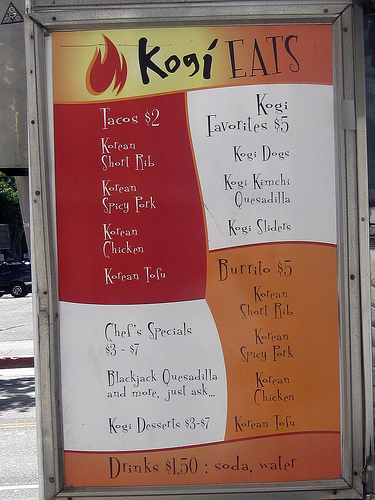 With that said, I’ve only had Kogi once prior to last week. I waited in line for 45 minutes then waited some more for my food. I felt fairly foolish the entire time I was waiting. Having a couple of tacos and kimchi quesadillas assuaged little of the guilt I felt for being one of “those” foodies. One that had to try all that was trendy.

Years passed and now there are probably closer to 80 “gourmet” food trucks rolling around L.A. (and quite a few in Orange County). I’ve tried a lot of them and yet, I felt like I had to return to the root of the phenomenon. And it was cinched when I saw no line walking past Kogi last Friday.

I put in an order for short ribs and spicy pork tacos as well as a kimchi quesadilla. I have to say I do like Kogi more than the knock off Korean-Mexican food trucks. There is something about that slaw and the sauce they use.

Some people knock Kogi because they knock things anyway. But I do appreciate them and the culinary trend they started. I’m probably never going to be a real truck chaser but if I see a truck and it looks interesting, I’ll try it.