A Restaurant with a Vu 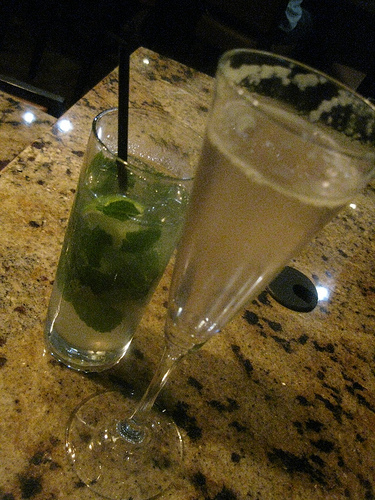 Jamaica Bay Inn took over an old budget motel along Admiralty in Marina del Rey and turned the beachfront address into a colorful tropical-themed boutique hotel. With the ambitious Southern-molecular gastronomy cuisine offered at its restaurant Vu, this just might very well be the new hot spot in MDR. I was invited to check it out last week. 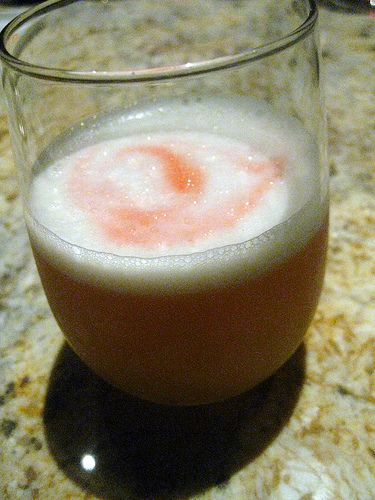 It’s obvious the cocktail program at Vu (pronounced “view”) was developed with cocktailians in mind. Using spirits like Death’s Door white whiskey and a little-known Italian liquer like Dimmi, the Mojo at first seemed like a variation of a mojito. It took a moment or two for my brain to reconcile this mint-heavy cocktail was in fact not a mojito. If you like less uncertainty in your life, stick with the spin on a whiskey sour, the D’Lux Sour. Made with Buffalo Trace, Luxardo, agave and bitters, this was a lovely cocktail.

Executive Chef Kyle Schutte comes from the South, specifically the North Virginia/ DC area.  Before coming to California to cook at Vu, Chef Kyle was one of the first chefs to introduce molecular cooking techniques in North Carolina. His menu at Vu showcases his Southern background as well as his enthusiasm for all things molecular (powders, foams, gels, etc). He prides his menu as “uniquely artful, thoughtful and affordable” besides being locally-sourced, humanely-raised, farmers’ market driven.

After starting with carefully curated charcuterie plate that included some house-smoked duck, we moved onto the tuna which came with cubed watermelon, powdered bacon and kaffir lime. The tuna chunks were slightly darker and contrasted beautifully with the watermelon. This dish was quite refreshing. Our first taste of Chef Kyle’s molecular dabbling came in the form of bacon powder. Initially tasting sweet, it dissolved on the tongue strongly hinting of luscious fatty bacon flavor.

More good stuff kept coming. The hamachi was great with just a hint of the BBQ spice. It was unexpected. I also liked both the oyster and mussel. The oyster was quite different with the Sprite ice and the solid white coconut jello cube was also noteworthy with the mussel. 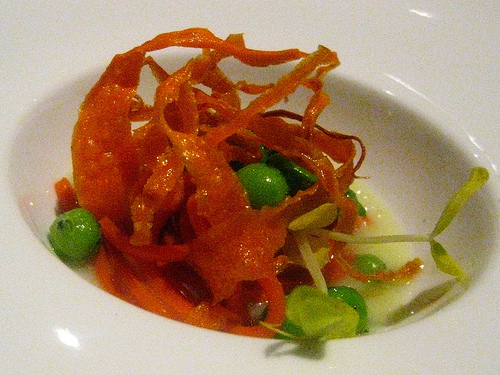 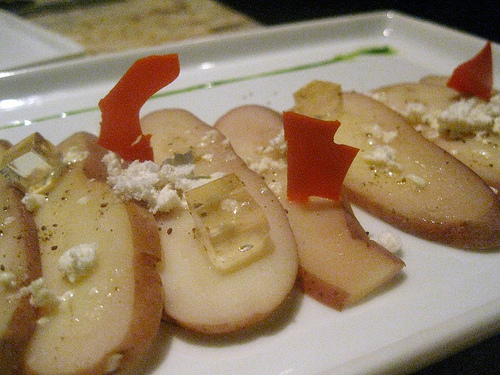 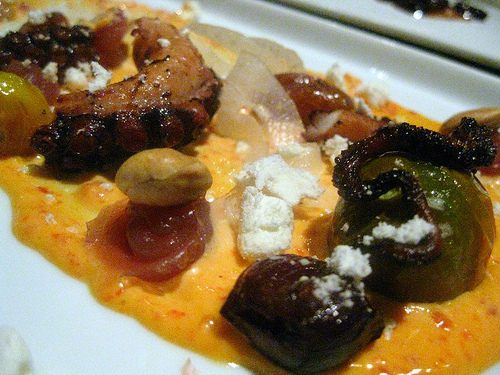 Peas and carrots is a simple dish with carrot noodles topped with carrot chips. It’s a light appetizer as is the potato salad. Considering I normally avoid mayo as much as possible, eating this potato salad with powdered mayo almost seemed fun. Just like popping the white wine vinegar gel cube and crunching on the carrot glass. Under hot small plates, the charred octopus appeared with a romesco sauce. The color reminded me of pimento, a very southern cheese but apparently this nutty sauce was nothing like it. 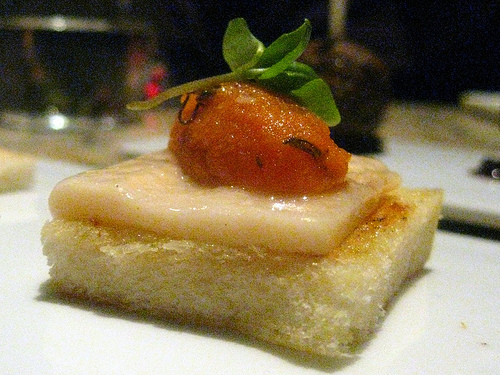 Our next set of small plates included the grilled cheese, pork belly and lamb lollipops. The grilled cheese seemed to me a deconstructed one topped with a tomato jam to represent the more traditional tomato soup. The pork belly was fantastic with a root beer jello. I enjoyed the crispy grits as well. It sort of reminded me of Chinese shrimp toast at dim sum. And the lollipops were sweet tea poached with a grape relish. All highly playful. 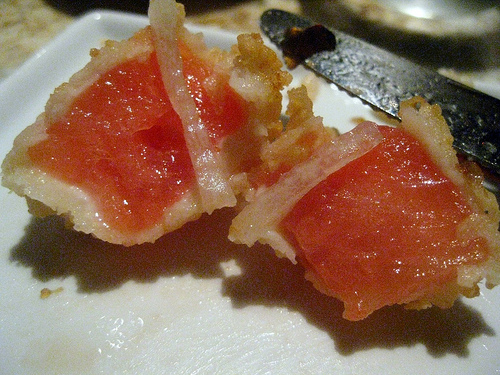 I will tell you without shame I love chicken fried steak. It wasn’t though until college when I realize chicken-fried was more of a term to describe how the food was cooked rather than it being chicken. So, what else can we chicken-fry? Watermelon, of course. The balls of watermelon were topped with house-made pickled watermelon rinds. The result? Sweet, fried, salty– perfect for bar snacking.

Entrees included sea scallops which were perfectly cooked, King Cole Duck– everyone went gaga over the creamy goat cheese polenta, the 16 oz pork shank and sous vide lamb. The pork shank was a bit dry. I wondered about the marrow but everyone was too polite to try to scoop it out. The lamb came with the first foam I saw; the feta broth. I have to give it to Chef Kyle for being so light-handed with this molecular gastronomy stuff. It was almost imperceptible in the main dishes  if you weren’t looking for it. 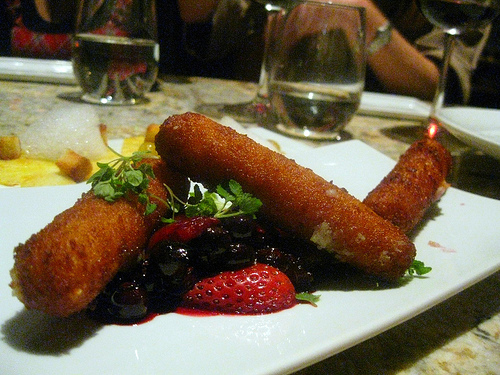 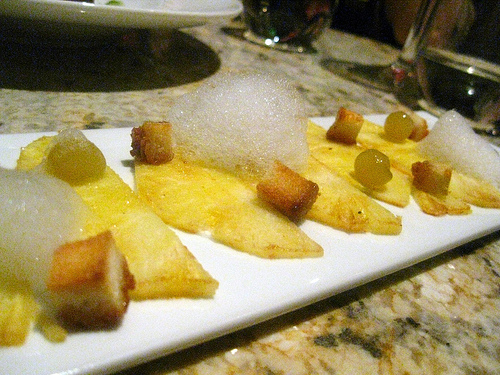 Desserts are where I think molecular gastronomy really shine. By now flexible chocolate seems as ubiquitous as regular chocolate cake. This came with the most mouth-puckering tart sorbet but somehow, mixed with the chocolate, it became oddly magical- exactly the sweet promise of molecular gastronomy. The other desserts seemed fairly simple enough- fried polenta cakes, sliced pineapple with foam and a cake that reminded me of French toast.

Having had full on molecular gastronomy meals and others where there were just a few touches, I think Vu is a welcome addition to the realm of exploring what else we can do with food. People say don’t play with your food but why not? Especially when it’s fun to be experimental. Chef Kyle takes us there and beyond.

Vu at the Jamaica Bay Inn

6 thoughts on “A Restaurant with a Vu”

Leave a Reply to An interested Reader Cancel reply