Love is in the Air at Hop Woo 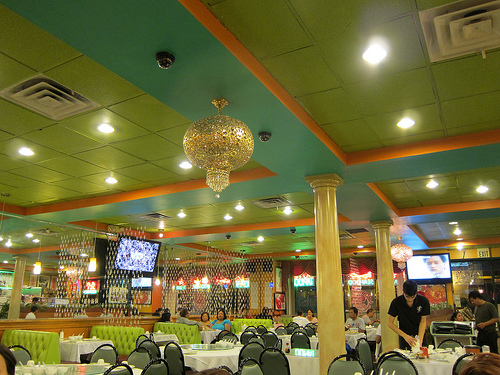 I’m not entirely certain when people began to associate me with bizarre and extreme eating. Maybe it was after the pig’s head dinner at Gorbals and teasing everyone about bull’s penis at Feng Mao.  I didn’t actually think I was going to have to eat bull’s penis. It was one of those weeks where I was running around so much that I actually got sick. Or maybe it was allergies. It’s hard to tell with our bi-polar weather in L.A. I was supposed to take it easy but at the last minute, accepted an invitation by Deep End Dining and Trippy Food to join them at Hop Woo for a “very interesting dinner.” I knew bull’s pizzle was involved but OH MY GOD, I ate rooster testicles too. This dinner officially became the cock and balls dinner to me.

Hop Woo is run by Chef Lupe Liang and wife Judy. There’s the regular menu, the Chinese menu (signs are posted through out the restaurant) but there’s also the secret menu. Hop Woo is located in Chinatown and in the space that my dad used to work at in the 70s. I was feeling a bit nostalgic. I was born at French Hospital, just around the corner from the restaurant. 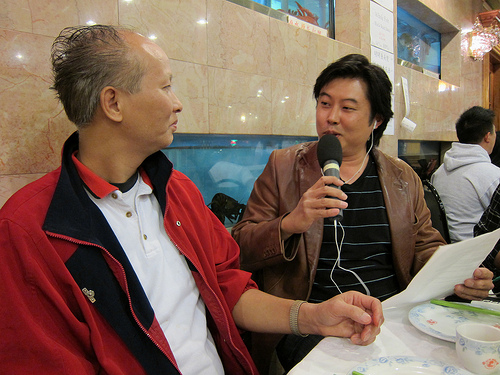 Eddie Lin had already ordered by the time I arrived. The bowls of bull’s pizzle soup were presented to us while Eddie interviewed Chef Lupe for KCRW. 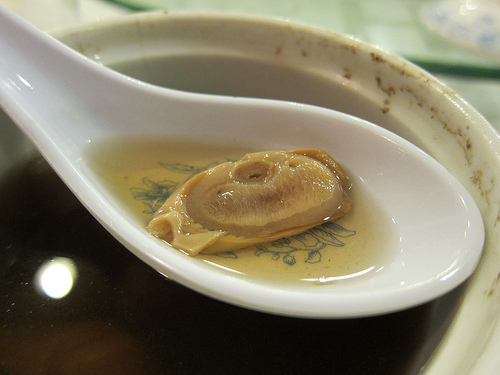 A slice of life- literally

At first, the soup was like any other Chinese medicinal soup I had growing up. I instructed Val of Trippy Food not to eat the hard bark, twigs and dried orange peel. He ignored me, of course. Actually, this soup was very sweet and not like the bitter soups generations of Chinese grandmothers and mothers foist upon their offspring. But finally I couldn’t ignore the slightly beige slices anymore. I ate a few slices and chunks of meat. None were really bad until I hit a slimy bit. Ugh! No more. More pics of the pizzle on my sneak peek post. 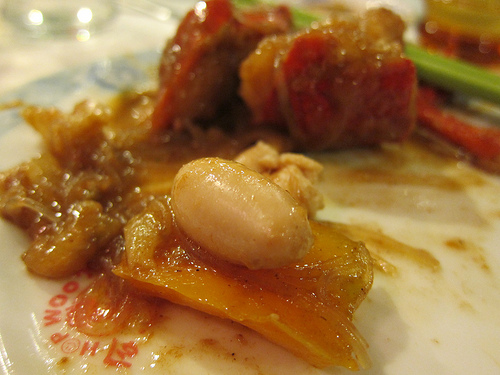 At this point, Chef Lupe discovered I spoke a smattering of Cantonese. He decided it was much easier to tell me what the dishes were and have me translate it to Eddie and our table. Except I didn’t know the word for “testicle” in Cantonese and when this lobster noodles dish came out, I thought he was talking about scallops. Yeah, those white bean-like things are NOT scallops. And definitely not garlic. Not to be crude but these balls were actually quite tasty and exploded in your mouth. Okay, that was crude.

Then we had a massive plate of sea urchin. After the cock and balls,  having sea urchin boy and girl parts was almost normal. I am still not the biggest fan of uni but after seeing the thing wriggle about mere inches from its recently moving friends was a bit fascinating.

Eel! Hey, something that doesn’t involve sexual organs! Gee, and I was hoping for uterus.

We enjoyed the crispy rice from the clay pot and the eel was so tender.

I’m fairly certain I’ve had deer before. Lately, I’ve been loving venison carpaccio. The deer meat was stir-fried with squash. It was a simple and delicious dish.

Who ordered the chicken?

I think I was most surprised by the chicken that popped up next. Not because it wasn’t good. You can tell how fresh this chicken is by the sweet taste but who ordered it? 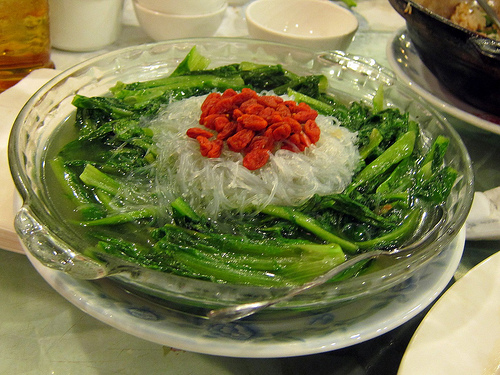 These Chinese greens were topped with cool noodles and goji berries. Again, another outstanding and simple dish. It cleansed our palate and prepared us for dessert.

Most Chinese desserts are not very sticky-sweet and are usually comprised of bean soups. This one was unusual to me because it had bits of seaweed in it. I liked it more than the traditional red bean soup.

Thanks to Eddie, Val, Chef Lupe, Judy and everyone at Hop Woo for an usual dinner. I look forward to trying more dishes. Happy Lunar New Year!

for their perspective on the cock and balls!

8 thoughts on “Love is in the Air at Hop Woo”