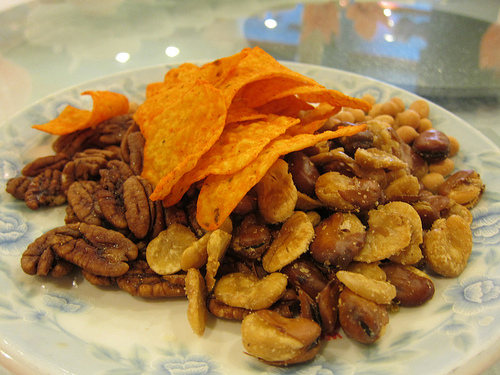 Doritos are very Chinese, you know

Two hours before dinner, I get a note to come by Hop Woo. Chef Lupe was back in town and wanted to share what people are in eating in China. I was excited since Hop Woo is the near notorious restaurant where I had bull’s penis soup, aka bull’s pizzle. There were rumors of cobra.

this is all the cobra we got. picture drawn by Trippy Food

This dinner was a whole family affair. Chef Lupe, his wife and two daughters (and later his brother-in-law) joined us for a feast. 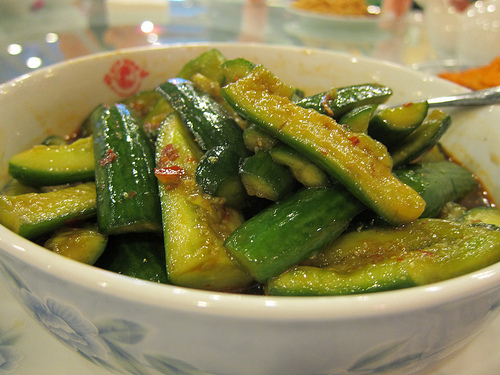 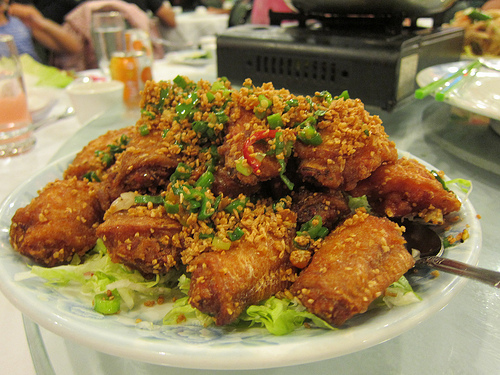 Next we got down to some  “serious” foodie action with Peking duck.

Check out that crispy skin!

A classic Chinese dish is Peking duck served with warm soft white buns, sauce and scallions. Chef Lupe really stepped up the game with his scallion flowers that could pass for little alien green crabs. The skin of the duck was wonderfully crisp and you could hear the skin “shattering” with every bite. 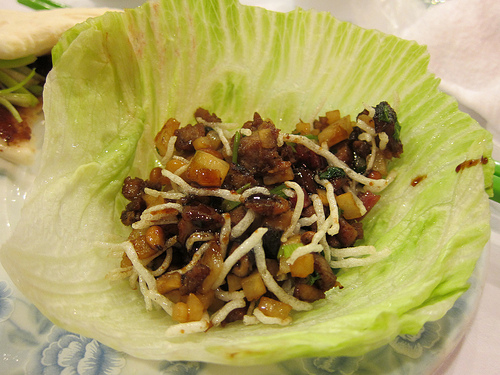 Ah, but what do you do with the meat of the duck? I’ve been to some restaurants that toss it in a stir-fry or some include it later at the end of a meal with fried rice. At Hop Woo, they opted to give the classic lettuce wraps a new spin with diced duck. Usually made with chicken or squab, the wraps became exotic again.

More soup! This time it was a slightly spicy sea snail and clams soup that came out with a table-top burner to keep it warm. See it bubble here. The flavor of the soup reminded me of a slightly Thai spin with the basil. And the snails? Best not question what that end bit is. I also recommend just eating the soup with plain white rice to fully enjoy the soup. 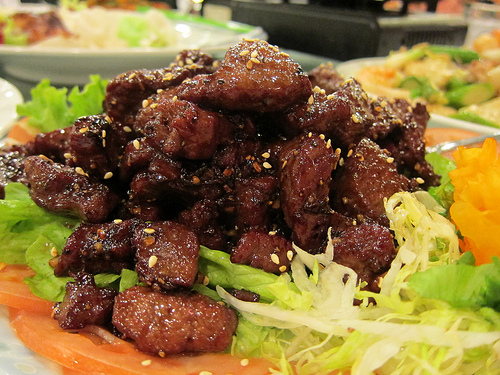 For those who still hanging out waiting for the exotic foods, I gotta disappoint you right now. We had beef. Good ol’ beef. Normal and prepared shaking beef style. The beef was absolutely my favorite of the night. Tender, tasty, exactly what you want in beef. This version was much better than Slanted Door‘s in SF.

seafood in a taro nest

fish in two sauces; black bean and sweet and sour

Oh wow, I haven’t had seafood in a basket since I was a kid. I love this classic banquet dish. It’s always very classy and Hop Woo’s version had a lot of nibbly seafood bits. I realized a long time ago there’s nothing like a sweet and sour sauce made from scratch. It’s not super sticky sweet. It’s subtle and piquant. And the filet bathed in it was great. Another dish that went well with plain white rice.

Chef Lupe and his drawing of an herb

We mostly communicated with Chef Lupe with a variety of pictures culled from the internet, hand drawings and translated Cantonese to Mandarin to English or Cantonese to English (thank goodness we were eating with Chef Lupe’s daughters!). For his last soup, we could never quite define what kind of water fowl this was. It was supposed to be like a duck but it could walk, fly and swim. Wait, don’t ducks do that? It also utilized an expensive herb harvested from mountains in China when the snow was still on the mountains. Chef Lupe’s drawing kind of makes it look like a carrot but the picture I saw on the internet makes it look more like a headless mouse with a long tail.

The soup was great but we were busting at the seams. It was time to enjoy our wine and have a chat with our friends.

So what did we learn the Chinese ate in China? It appears they eat Chinese food. Well, maybe they just call it food.

Maybe cobra will be on the menu next time.

Thanks to Deep Ending Dining, Trippy Food and AriannaLA for the wine and company.